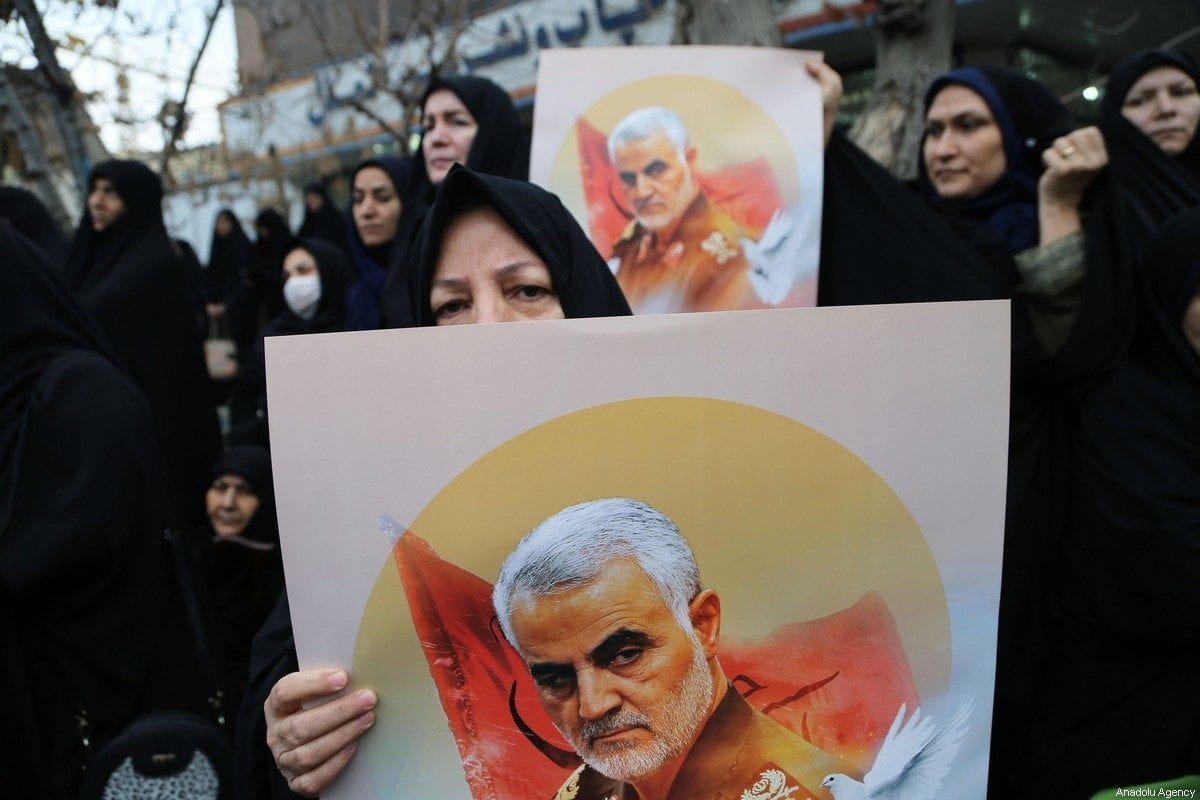 Iranians take part in an anti-US rally to protest the killing of Iranian Revolutionary Guards' Quds Force commander Qasem Soleimani by a US airstrike in the Iraqi capital Baghdad, at Palestine Square in the capital Tehran, Iran on 4 January 2020 [Fatemeh Bahrami / Anadolu Agency]
January 5, 2020 at 12:38 pm

Hundreds of Palestinians in the Gaza Strip on Saturday mourned the death of Iranian Revolutionary Guards commander Qassem Soleimani, killed by a US air strike in Iraq, reported Reuters.

Leaders of Hamas and Islamic Jihad joined mourners at a tent erected in Soleimani's honour in the heart of Gaza City.

Flags of the United States and Israel were laid on the ground for visitors to tread on as they entered, passing posters of Soleimani. The flags were later set on fire.

"We are loyal to those who stood with the resistance and with Palestine and we hold the USadministration and the Zionist occupation fully responsible for the consequences of this deplorable crime," said Ismail Radwan, a Hamas official.

Israel, which defended the US operation on Friday, has fought three wars with Hamas in the last decade, and in 2006 fought a brief war with the Iranian-backed Hezbollah militia across the Lebanese border.

Trump: US will hit 52 Iranian sites if Iran retaliates

Qassem Soleimani was the head of Iran's elite Quds Force and the mastermind of its regional security strategy. He was killed early Friday near the Baghdad international airport along with senior Iraqi militants in an airstrike ordered by President Donald Trump. The attack has caused regional tensions to soar and tested the US alliance with Iraq. Fearing escalation, NATO has suspended it's training activities in Iraq, while the British Navy has committed to escort every UK-flagged ship across the Straits of Hormuz.

Showing no signs of seeking to reduce tensions, the US president has since issued a stern threat to Iran on Twitter, saying that the US has targeted 52 Iranian sites that it would strike if Iran attacks Americans or US assets in response to the US drone strike that killed Soleimani.

The US strike on Soleimani's convoy at Baghdad airport also killed Iranian-backed Iraqi militia leader Abu Mahdi al-Muhandis, and it raised the specter of wider conflict in the Middle East.