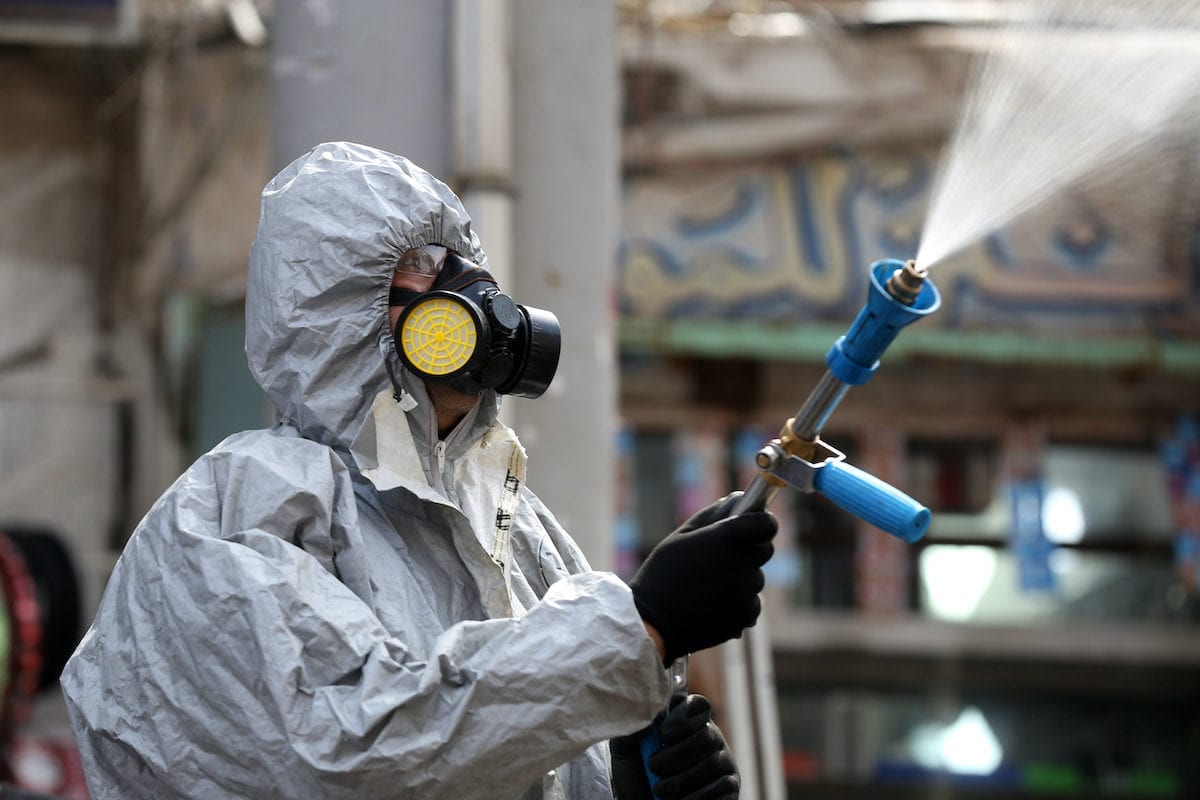 Civil defense team with protective suits disinfect the streets and workplaces as a precaution to the coronavirus (Covid-19) in Baghdad, Iraq on March 09, 2020 [Murtadha Al-Sudani - Anadolu Agency]
March 15, 2020 at 12:00 pm

Citizens and residents in Kuwait, which went into virtual lockdown on Thursday, had their temperatures tested before entering banks, where long queues formed on Sunday after the state limited the number of operational branches. Masks and gloves were distributed to those in line.

Kuwait and Saudi Arabia have taken the most drastic steps among the six Gulf Arab states, which have recorded a total of 870 cases but no deaths, by halting international passenger flights. The United Arab Emirates has suspended new entry visas from March 17 while Qatar has restricted visa issuance.

Kuwait, where the ban on international flights began on March 13, has offered its citizens stranded at London's Heathrow Airport paid accommodation at an airport hotel with three meals a day, according to an embassy notification seen by Reuters.

An American living in the Saudi capital Riyadh said his parents — in their 60s and 70s — cut short their visit and departed the kingdom on Saturday night before the flight suspension went into effect at 0800 GMT Sunday.

"I'm glad that they're off even though it means 24 hours in the airport hotel in Dubai. Given their age and medical issues it's definitely better than stuck here for weeks," he told Reuters.

Saudi Arabia, which has locked down its eastern Qatif region where many infections were recorded, has 103 cases of the virus.

Two gated compounds in the capital Riyadh housing hundreds of expatriates have each reported one case among residents, according to emails from management seen by Reuters.

The Saudi health ministry did not immediately respond to a request for comment and it was not clear if the two cases were already included in the kingdom's total count.

Many of the coronavirus cases recorded in Gulf Arab states have been linked to travel to Iran, which has emerged as an epicentre for the disease in the Middle East.

Iranian President Hassan Rouhani said on Sunday the government had no plans to quarantine Iranian cities because of the coronavirus outbreak, adding that there was no shortage of goods in shops and supermarkets, state TV reported.

In the UAE, regional tourism and business hub Dubai joined other emirates in shuttering cinemas, arcades and gyms. Dubai's large Global Village shopping and entertainment market, which runs from November to March each year, said it was closing early. The UAE capital Abu Dhabi shut down public beaches and parks.

The Abu Dhabi Securities Exchange said on Sunday it was closing all its trading halls until further notice, a day after Kuwait's bourse said it would do the same.