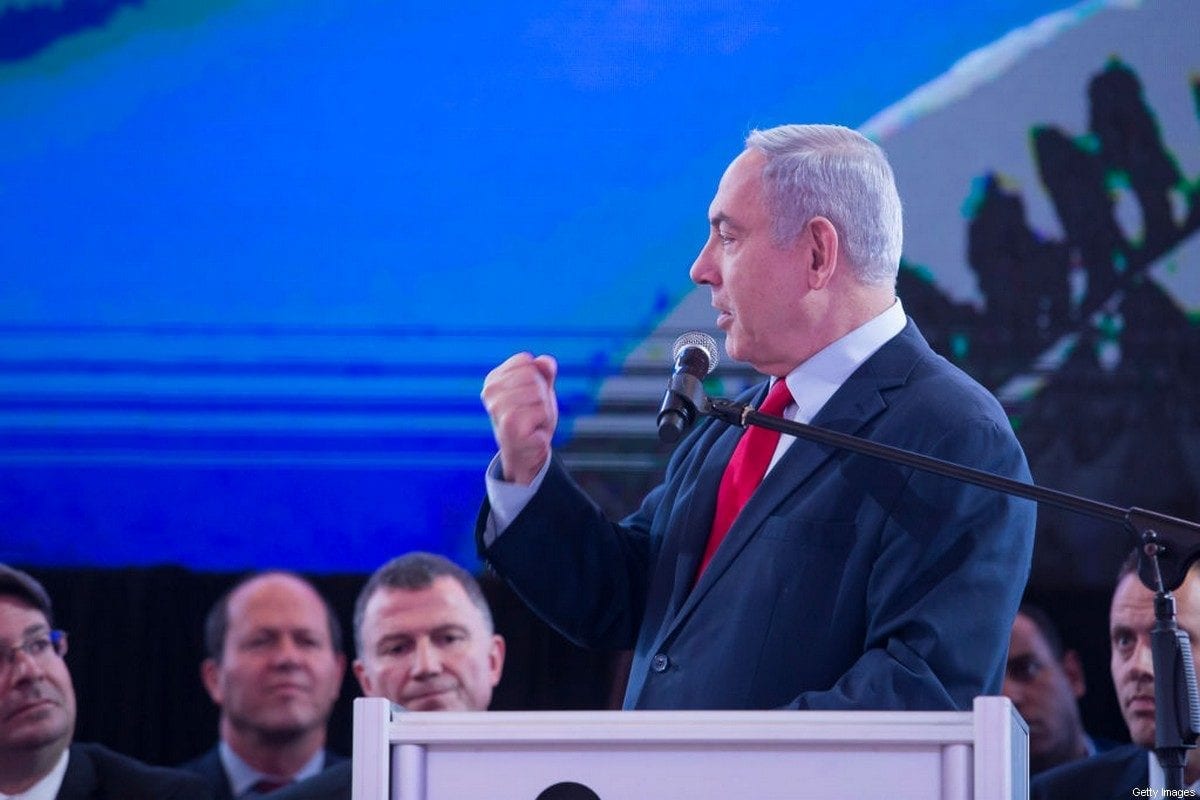 Israeli Prime Minister, Benjamin Netanyahu, delivers a statement to the press during a Likud Party meeting on 1 March 2020 in the city of Lod, Israel. [Amir Levy/Getty Images]
May 17, 2020 at 4:00 pm

Israeli Prime Minister Benjamin Netanyahu presented his new unity government to parliament on Sunday, ending more than a year of political deadlock but still facing a trial starting in a week for alleged corruption, Reuters reports.

His power-sharing agreement with former election rival, centrist Blue and White leader Benny Gantz, opens the way for the right-wing Netanyahu to proceed towards a pledged de facto annexation of parts of the occupied West Bank, land Palestinians seek for a state.

Under his accord with Gantz, after three inconclusive elections, Netanyahu will remain prime minister for 18 months before handing over to his new partner.

Gantz, a former armed forces chief, will be Netanyahu's defence minister and "alternate prime minister", a new position that Netanyahu will hold when Gantz is in charge.

By assuming that "alternate" premiership once he hands over to Gantz, Netanyahu hopes to avoid having to resign from the government under legal rules that allow a prime minister to remain in office even if charged with a crime.

READ: Israel's Netanyahu will be victorious after all this political mayhem

Israel's longest-serving leader, Netanyahu, now 70, first came to power in 1996 and has served three consecutive terms since 2009. He goes on trial on May 24 on charges of bribery, breach of trust and fraud, which he denies.

"The people wanted unity, and that is what it got," Netanyahu told parliament, citing a desire to steer clear of a fourth election and the need for a national battle against the coronavirus crisis.

Gantz, in his address to the legislature, said: "The biggest political crisis in Israel's history is over."

Parliament is expected to formally approve the new administration later on Sunday.

With a new government in place, Netanyahu would be poised to proceed with his plan to extend Israeli sovereignty to Jewish settlements and the Jordan Valley in the occupied West Bank, territory Palestinians seek for a state.

He has set July 1 as a starting point for cabinet discussions on the volatile issue, with no publicly stated deadline for approving de facto annexation of land Israel captured in the 1967 Middle East war.

Palestinians have vehemently opposed such a move, urging international sanctions against Israel in response. It would be certain to heighten tensions in the West Bank and Gaza that could ignite anti-Israeli violence.

Gantz, 60, had cited the charges against Netanyahu in again pledging to his voters after the latest election in March that he would not serve in a government with Netanyahu. Angering many of his supporters and splitting his own party, he made a deal in the end, saying the coronavirus crisis made unity an imperative.

"The coronavirus crisis is an excuse to hold a corrupt celebration at the taxpayers' expense," new opposition leader Yair Lapid, who split from Gantz, said in parliament.

"You are establishing the biggest and most wasteful government in Israeli history."

The cabinet will have a record 36 ministers, with several new posts created to ensure both Netanyahu and Gantz could dole out cabinet seats to loyalists – deal-making that boosted the veteran leader's reputation as a political survivor.