The annexation in the controversy of the Israeli right 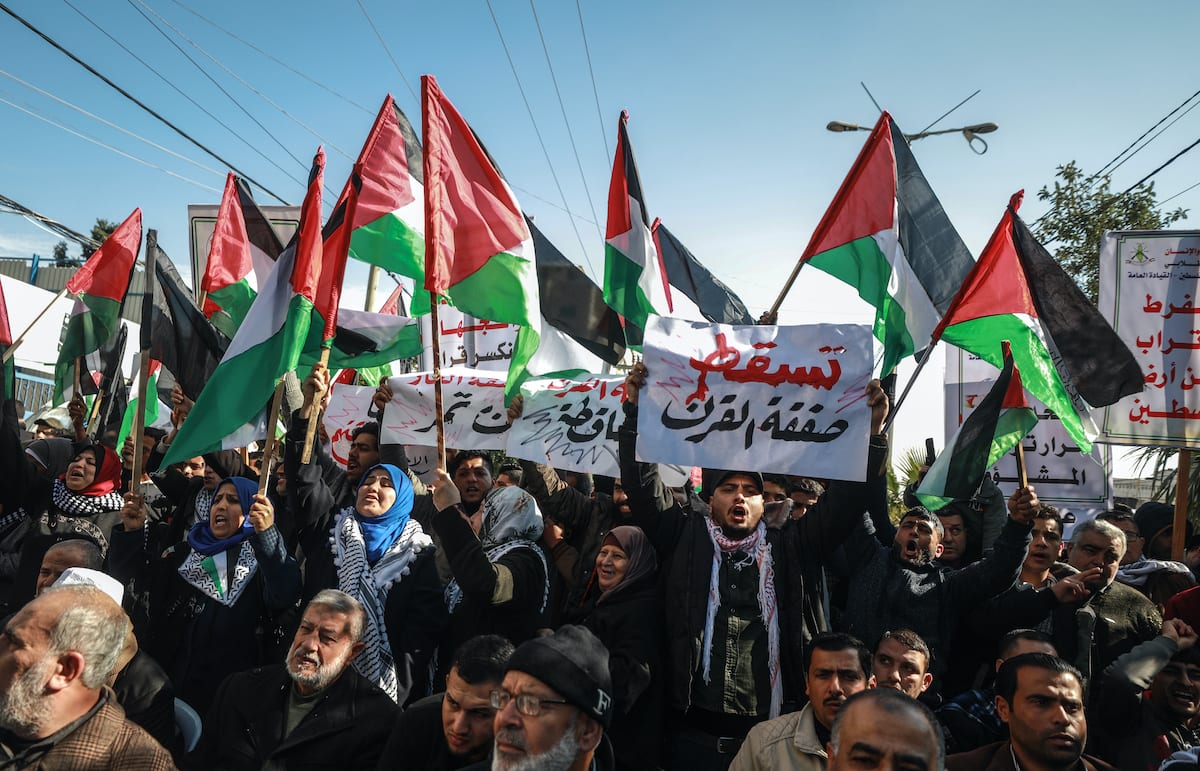 Palestinians stage a protest against Deal of Century in Gaza City, Gaza on 28 January 2020 [Ali Jadallah/Anadolu Agency]
Antoine Shalhat
May 27, 2020 at 4:15 pm

Israeli Prime Minister Benjamin Netanyahu stressed during the Likud meeting in the Knesset on 25 May that he does not intend to change the date set for annexing the Jordan Valley and settlements in the occupied West Bank in Israel. The date was set for early July. He mentioned that there is a "historic opportunity" to make such a move "which hasn't existed since 1948" that he stressed should not be missed. This has caused a heated debate, even amongst the ranks of the various Israeli right-wing parties regarding the size of the land to be annexed from the West Bank.

No final data has yet been available regarding the size of the land intended to be annexed, and this issue is still subject, according to Israeli media, to drawing detailed maps by a joint Israeli-American team, in accordance to what was stipulated in the 'deal of the century' regarding the need for annexation to occur as part of an agreement between the two parties. In spite of this, there are indications that this annexation will include between 30 per cent and 33 per cent of the area of the West Bank located in Area C, leaving about 30 per cent of the rest of the land in these areas subject to negotiations between Israel and the Palestinians.

The reason for this debate within the Israeli right is the desire among some of its spectrum not to be satisfied with the inclusion of the aforementioned percentage, since expressing satisfaction with this percentage would mean the remaining land will be allocated to the establishment of the future Palestinian state, which these parties oppose the establishment of, regardless of its characteristics, substance and area.

READ: Will the PA really end security coordination with Israel?

Until the dust surrounding all these details settles in the near future, the discussion will revolve around these parities' opposition to the issue of the 'deal of the century' supporting the establishment of a Palestinian state. This is despite the fact that this support makes it possible to establish a small, specific and weak Palestinian state alongside Israel. According to multiple Israeli readings, some of which, especially the analysis papers issued by the Institute for National Security Studies at Tel Aviv University, the Palestinian state would not be geographically connected and will be divided into six cantons completely surrounded by Israel, not to mention the existence of Israeli control over all axes linking the Palestinian areas and Israeli security and sovereign control over the surrounding areas, including external crossings (the Allenby crossing over the Jordan River, and the Rafah crossing with Egypt). This confirms that the real reason for this plan is to reach a surrender agreement for the Palestinians, not a peace settlement or agreement.

READ: The ICC does not pose a 'strategic threat' to Israel

At the same time, these parties note that while the Palestinians' right to an independent state during the Oslo era was still subject to negotiation, it has now become almost an inevitable matter in the world, which causes these parties to criticise the Trump deal. However, they ignore the fact that the preconditions it sets for the realisation of this right abolishes the Palestinian state from any content, in addition to the fact that its stipulation that the Palestinians recognise Israel as a Jewish state.