Attempts by Israel's advocates to portray my grandfather as a liberal pacifist is a distortion of his legacy
July 20, 2020 at 9:10 am | Published in: Africa, Article, Israel, Middle East, Opinion, Palestine, South Africa 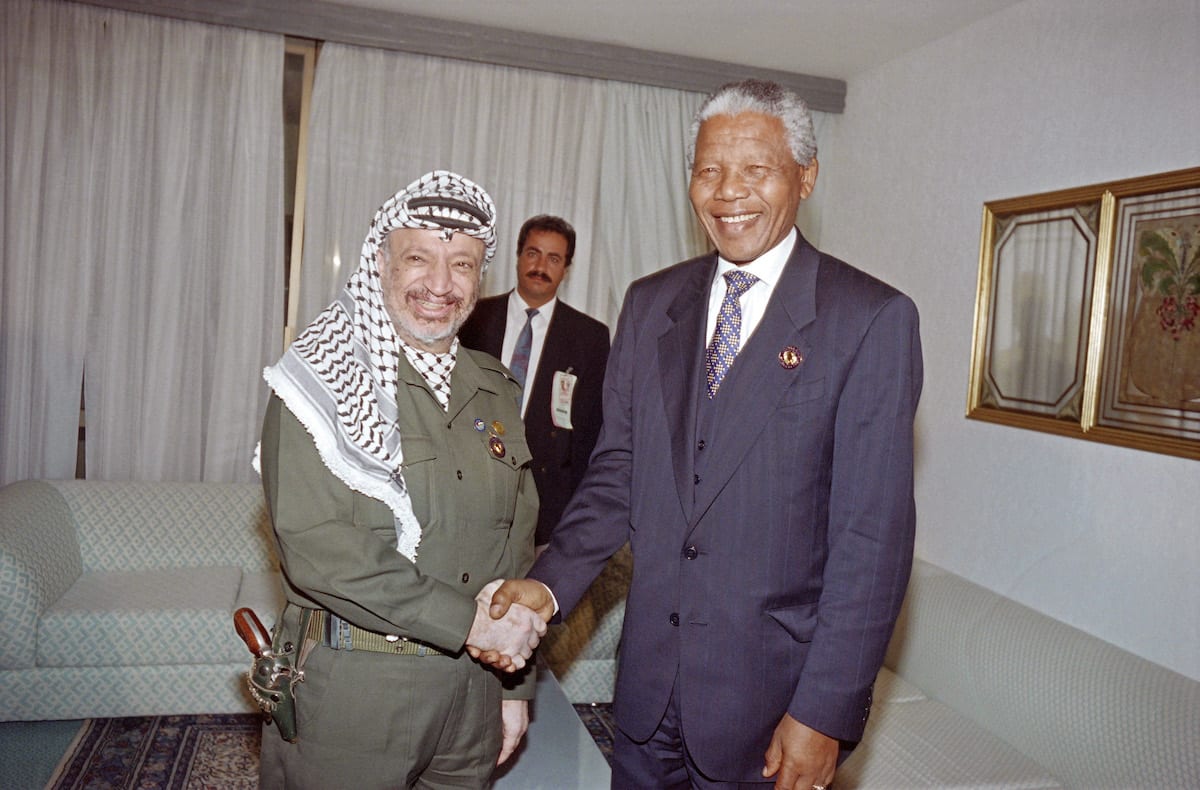 Israel's lobbyists – both in South Africa and around the world – have resurrected my grandfather as a liberal pacifist who benevolently made peace with his enemies. To reduce the life of Rolihlahla (Nelson Mandela's middle name, meaning "the uprooter") to peace-maker and reconciler is a deliberate distortion of his legacy.

President Mandela lived up to his middle name. He was a revolutionary, intellectual and freedom fighter. His life was dedicated to resisting oppression and restoring dignity. The form of resistance that he advocated was determined by the oppressor. "It is useless and futile for us to continue talking peace and non-violence against a government whose reply is only savage attacks," Mandela warned in May 1961, seven months before he became the first commander of the newly-formed armed wing of the African National Congress called uMkhonto we Sizwe (Spear of the Nation).

READ: The powers that supported Mandela's arrest are supporting apartheid in Israel today

Yet, when Israel's supporters talk about Nelson Mandela, they focus exclusively on his message of dialogue and reconciliation.  Consequently, the story of Madiba and South Africa's transition to democracy has been reduced to a fairytale of forgiveness, rather than a long, hard – often angry – chronicle of justice and freedom. Dialogue, forgiveness and reconciliation must be put back into its proper context and place in Mandela's story and South Africa's history.

Mandela's cause was not peace and reconciliation; it was justice and liberation. Reconciliation and forgiveness only came after liberation was achieved. Before that, Nelson Mandela considered any kind of "reconciliation" with the oppressor as submission and a weapon of co-option to blunt the liberation movement.

South Africa's allies in the global anti-apartheid movement also never asked us to make peace with our oppressors before our liberation was achieved. Asking South Africans to engage in dialogue with the apartheid government within the context of a brutal police state characterised by relentless dispossession, restrictions on freedom of movement, violent crackdowns on protest, and detention without trial, was asking us to collaborate with our oppressors. The world never asked – or expected – this of South Africans, yet it is demanded of Palestinians who live under the same – if not worse – conditions.

Mandela the Forgiver is especially adored by Israel's lobbyists.  They love recounting how he earned the trust of his enemies, or had tea with Betsie Verwoerd, the widow of apartheid's architect, Hendrik Verwoerd. Israel's apologists want the world to believe that as soon as Nelson Rolihlahla Mandela was released, he abandoned the armed struggle and quietly entered into negotiations with the apartheid government, having no demands or pre-conditions. "Even after 27 years in prison, when he was released, Mandela offered dialogue, not violence," says South African writer, Benjamin Pogrund. This is not the reality.

On the day he was released from prison, Nelson Mandela said: "The factors which necessitated the armed struggle still exist today. We have no option but to continue. We express the hope that a climate conducive to a negotiated settlement will be created soon so that there may no longer be the need for the armed struggle."

Mandela did not enter into negotiations while black South Africans were being violently dispossessed and persecuted, or while our liberation leaders were being imprisoned, tortured and assassinated. "The carrying on of negotiations and rhetoric on peace while at the same the government is conducting a war against us is a position we cannot accept," Madiba declared at the then Organisation of African Unity (OAU) in September 1990.

There were basic conditions that needed to be met before Mandela began negotiations. These included an end to the dispossession and state-sponsored violence against black South Africans, the release of political prisoners, and the return of exiles. When Palestinians ask for the same conditions before they come to the negotiation table, they are called unreasonable and stubborn.

Israel's advocates have convinced themselves that Palestinians are the opposite of what Mandela stood for. Whenever Palestinians resist Israeli co-option, they are told that Madiba would never have behaved like that.

In their mind, Mandela – unlike Yasser Arafat – would have accepted checkpoints, illegal settlement construction, and seven years of fruitless negotiations during Oslo and the Camp David Accords.

READ: Nelson Mandela's church has adopted a boycott of Israel to be emulated

In their imagination, Nelson Mandela – unlike Mahmoud Abbas – would have agreed to Ehud Olmert's 2008 secret Palestinian Bantustan deal that was hastily scribbled on a napkin.  The Madiba that they have created would never have rejected Israel's "deal of a lifetime" of a demilitarised Palestinian state with its main centres severed from each other and Israel controlling movement between the Gaza Strip and West Bank, Palestinian airspace, economic and foreign policy, water resources, and borders.

The Mandela that exists in the heads of Israel's advocates was always willing to compromise justice and dignity. The real Mandela, however, rejected several "generous offers" from the apartheid government including an early release if he renounced the armed struggle, surrendered his people's rights and confined himself to the Transkei Bantustan.

Proponents of Mandela the Forgiver forget that Madiba never conceded on any issue that would compromise his end-goal: the liberation of South Africans. During negotiations he and his comrades – like the Palestinians – often chose no agreement over one that did not meet their bare minimum in terms of dignity and human rights.

Israel has never gone into peace talks in the last two decades to actually negotiate with the Palestinians. It has used the peace process as a toy to keep Palestinians occupied (literally and figuratively) while it violently entrenches the occupation of the West Bank, and intensifies the siege on Gaza. But, as long as the 'peace process' continued, Israel could silence the boycott calls. That will be more difficult to do now that Israeli leaders openly discuss annexation, admitting that there will never be a Palestinian state.

We need Nelson Mandela's legacy more than ever in Palestine-Israel – not to preach about forgiveness and reconciliation – but to craft political solutions rooted in justice and dignity. The greatest lesson that Israel and its supporters can learn from Nelson Mandela's life is that peace, forgiveness and reconciliation will only come when all people enjoy justice, freedom and dignity.

This article first appeared on Al Jazeera on 20 July 2020