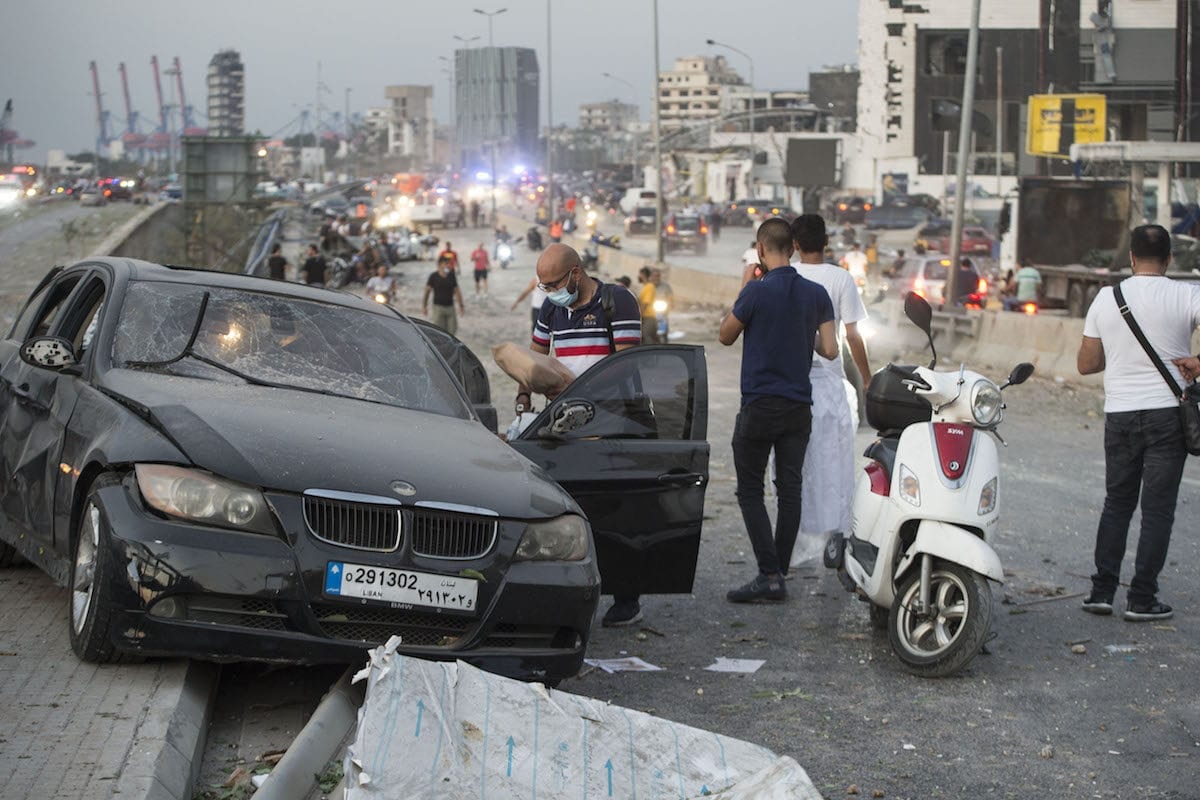 A damaged car is seen after a fire at a warehouse with explosives at the Port of Beirut led to massive blasts in Beirut, Lebanon on August 4, 2020 [Houssam Shbaro/Anadolu Agency]
August 5, 2020 at 3:46 pm

The blasts were caused when 2,750 tonnes of ammonium nitrate, that, according to official reports, had been stored unsafely in Beirut port's hangar 12 for six years, exploded. At least 100 people are thought to have died, with a further 4,000 seriously injured.

Hundreds of people remain missing sparking residents to launch an Instagram account under the handle @locatevictimsbeirut to aid the search. At the time of writing, the account had shared 94 posts, each with a picture, name and contact number related to the person.

Most of the posts are for missing persons, but several of the pictures include captions which claim the photographed person has been badly injured and taken to an unknown hospital.

Beirut's hospitals, many of which were themselves damaged in the blast, were quickly overwhelmed by the number of casualties, many of whom were covered in blood, forcing victims to seek medical attention as far from the capital as Tripoli, 80 kilometres to the north.

READ: Egypt's pyramids light up with Lebanon flag in solidarity with blast victims

Meanwhile, the blast caused widespread damage across Beirut with reports of shattered windows and balconies as far as 254 kilometres from the site of the explosion. Lebanese later offered those without home to go to, a place to stay, via an Instagram page called @open_houses_lebanon.

The posts offered accommodation in over 100 locations across Lebanon. While others took to Twitter offering up their houses for those in need. Many users posted the hashtag #ourhomesareopen.

One user wrote: "If anyone knows someone who can head north and can't sleep in their house due to the damage, we have 2 spare bedrooms that can fit 2-3 people each."

If anyone knows someone who can head north and cant sleep in their house due to the damage, we have 2 spare bedrooms that can fit 2-3 people each

Some hotels also opened their doors to those whose houses were destroyed by the explosion.

Others took to social media calling for residents to help clear the streets, while some posted lists of mental health professionals and engineers offering to help residents at discounted rates.

.@DaleelThawra is posting a number of resources, from the contact information of mental health professionals to offers by engineers willing to make glass repairs at discounted rates. They're also putting out calls for volunteers & supplies https://t.co/X6m0sTpSk0 #BeirutBlast pic.twitter.com/miGanc9rDb

The blast comes as Lebanon is struggling to deal with a rapidly worsening economic crisis, amid a severe second wave of coronavirus infections. Three days of national mourning was declared yesterday by Lebanon's President Michel Aoun, who also recommended a two-week state of emergency.