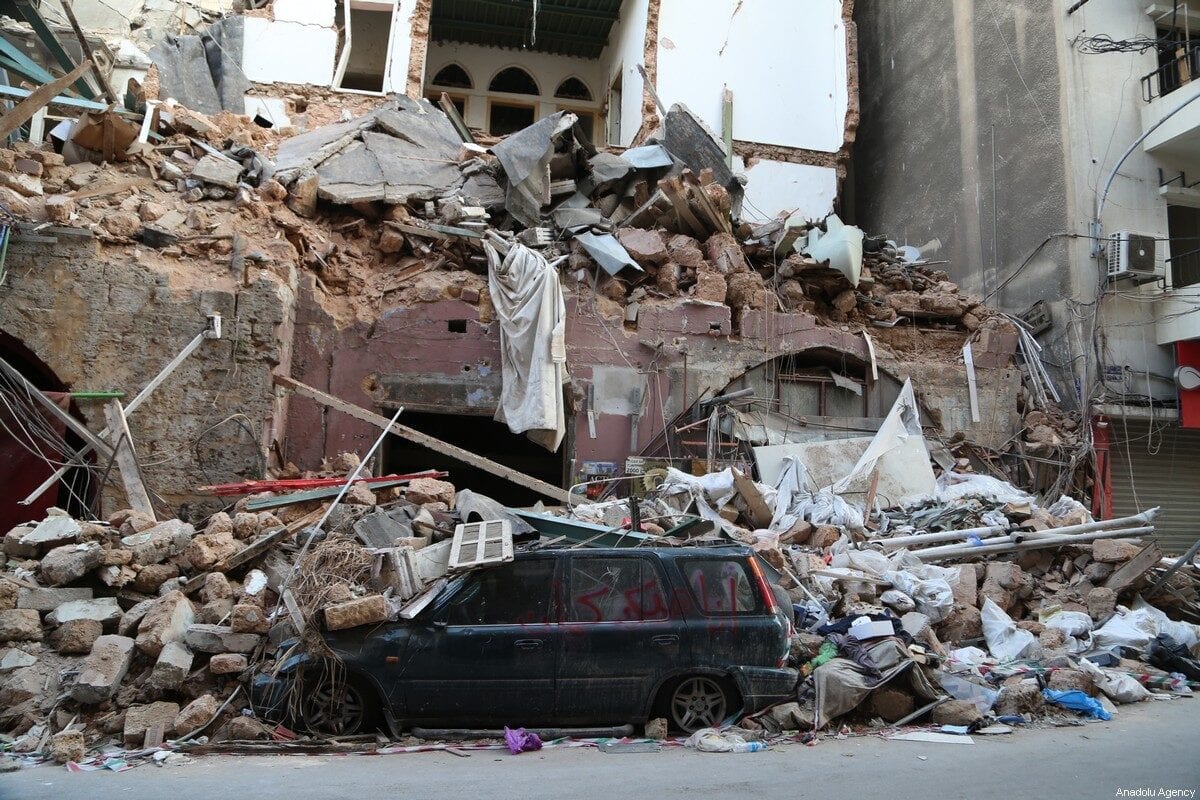 A damaged car and building are seen after a fire at a warehouse with explosives at the Port of Beirut led to massive blasts in Lebanon, 14 August 2020 [Enes Canli/Anadolu Agency]

The massive explosion which devastated Beirut earlier this month was nothing short of a catastrophe. Some 220 people lost their lives and, according to the BBC, as many as 300,000 people are now homeless as a result. This is a devastating blow from which it will take Lebanon's capital city a long time, probably years, to recover.

Among the most nauseating of responses to the blast was seeing representatives of the state of Israel sending "condolences" and fake offers of humanitarian assistance. As my colleague at The Electronic Intifada, Tamara Nasser, put it: "Israel, the destroyer of Lebanon was attempting to pose as its saviour."

This ghastly vision was utterly contemptible for anyone who knows the history of Israeli involvement in Lebanon. The Zionist state has left a long, bloody trail of dead bodies, displaced people and shattered lives, having invaded its northern neighbour many times since the settler-colonial entity established itself — upon the mass graves of Palestinians — in 1948.

In the 1950s, Israel's first Prime Minister, David Ben-Gurion, secretly articulated plans to occupy Lebanon by force and transform it into a puppet sectarian state ruled as a Christian supremacist entity in alliance with Israel, the Jewish supremacist entity.

In order to meddle in and stoke the Lebanese civil war (1975-1990), Israel armed, trained and supplied puppet Christian Maronite militias in Lebanon, including the brutal sectarian Lebanese Forces led by Bashir Gemayel. In 1978, Israel invaded directly in order to attack the Palestine Liberation Organisation, occupying much of South Lebanon. Israeli forces were soon forced out after stiff resistance by Palestinian fighters, but they soon headed back across their northern border.

In 1982, Israel carried out a full scale invasion of Lebanon in an attempt to crush the PLO's military, political and cultural presence once and for all. More than 20,000 Lebanese and Palestinian people were killed during this brutally aggressive war, including as many as 3,000 Palestinian refugees who were butchered by Israel's Maronite allies in the Sabra and Shatila refugee camps under the watchful eye of Israeli troops, who fired flares into the night sky to light the militia's way. Minister of Defence, later Prime Minister, Ariel Sharon, was found by an Israeli Commission of Inquiry to have "personal responsibility" for allowing this massacre to take place.

The Israelis reached and laid siege to Beirut, before being pushed back by stiff resistance and diplomatic pressure. However, South Lebanon remained illegally occupied by Israel until 2000, when the Lebanese resistance led by Hezbollah drove its forces out once and for all. Nevertheless, in 2006, Israel attacked Lebanon yet again, and another 2,000 people were killed in the massive offensive. Hezbollah succeeded in driving the Israeli troops out of Lebanon once more, but the country was again devastated.

Since then, Israel has carried out almost daily border violations, including fly-overs with drones and warplanes. Israeli politicians frequently threaten to bomb Lebanon "back to the Stone Age", kill civilians and systematically eradicate the country's civilian infrastructure, all of which are classed as war crimes.

On top of all of this, Israel's spy agencies have now been planting stories in the international media pushing the dubious and unproven conspiracy theory that the explosion in Beirut this month was caused by Hezbollah. As investigative journalist Gareth Porter explains in his most recent article: "Israeli officials have exploited the massive explosion at the Port of Beirut this August to revive a dormant propaganda campaign that had accused the Lebanese militia and political party Hezbollah of storing ammonium nitrate in several countries to wage terror attacks on Israelis."

READ: In fifteen years between Hariri's assassination and the Beirut explosion what did we learn?

Israeli spy agencies, wrote Porter, have "planted a series of stories from 2012 to 2019 claiming Hezbollah sought out ammonium nitrate as the explosive of choice for terrorist operations. According to the narrative, Hezbollah planned to covertly store the explosive substance in locations from Southeast Asia to Europe and the US — only to be foiled repeatedly by Mossad."

There is a slight problem with this Israeli narrative: none of it seems to be true. "In each one of those cases, however, the factual record either contradicted the Israeli claims or revealed a complete dearth of evidence," insisted Porter, whose entire article is well worth reading.

In the wake of the Beirut explosion, global and regional powers – the US and Israel first among them – are exploiting the febrile atmosphere in the country, and the understandable anger of the Lebanese people at their politicians, in order to push for Hezbollah to disarm. This is a longstanding goal in any case.

However, as veteran Palestinian journalist and commentator Abdel Bari Atwan wrote recently, "Like the Syrian regime, Hezbollah will prove impervious to pressure to disarm or exit the political scene."

Hezbollah has arms and fighters because there is a pressing and urgent need to defend Lebanon against Israel's military invasions and incursions. This is something that the Lebanese army simply cannot do.

Only a couple of weeks before the Beirut explosion, Israel's highly undiplomatic Ambassador to the United Nations made a thinly veiled threat to destroy the very same port that was devastated by the blast during his country's next war with Lebanon. Moreover, Moshe Feiglin, the appalling former deputy speaker of Israel's parliament, reacted with obvious joy to the deadly blast, calling it a "spectacular pyrotechnics show" and a "wonderful celebration".

So who were the Israeli President and army trying to fool when they claimed with characteristic hypocrisy that they wanted to "reach out" and "transcend conflict" by helping Lebanon to recover from the Beirut explosion? Whoever the intended audience was, very few people in Lebanon believed them, that's for sure.