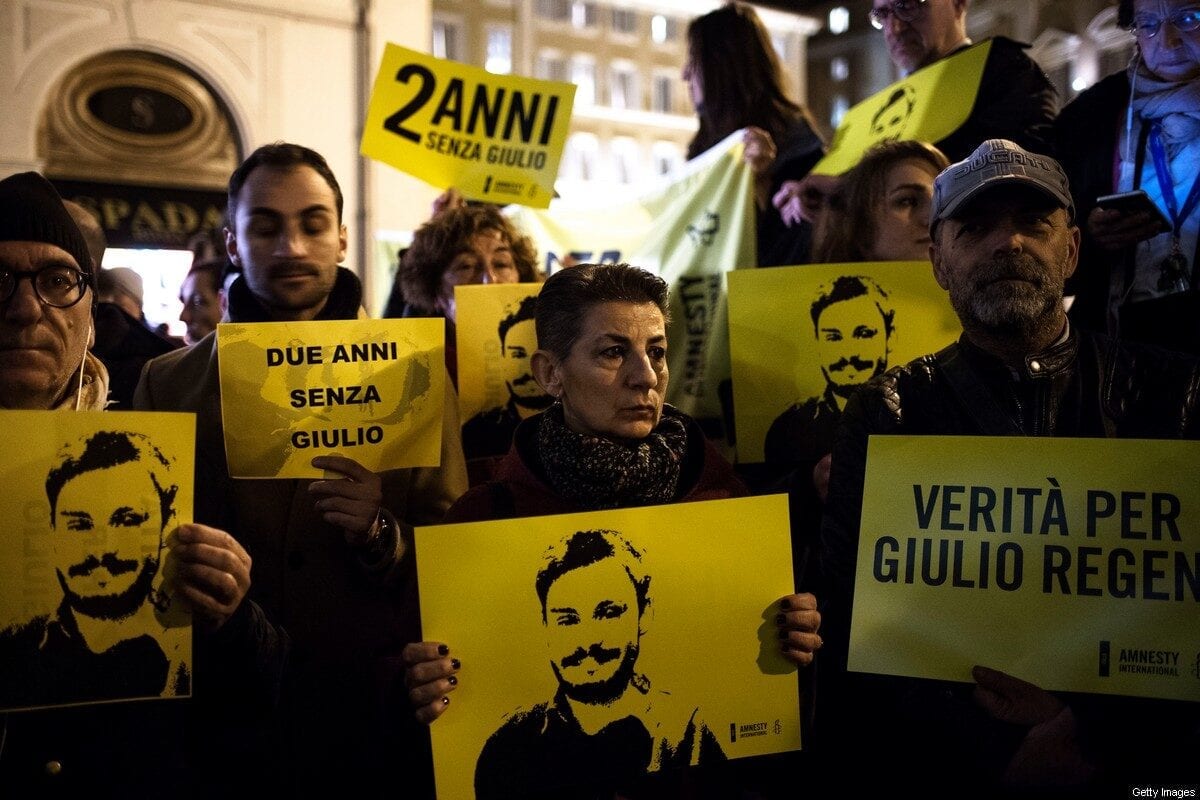 Candlelight procession for Italian student Giulio Regeni who was murdered in Egypt on 25 January 2018 [Antonio Masiello/Getty Images]
October 22, 2020 at 2:11 pm

The general prosecutor's office in Rome has sent a judicial request to Egypt's public prosecutor for information on three policemen whose names have come up for the first time in investigations into the torture of Italian student Giulio Regeni.

In 2016 Regeni was tortured to death and found on the Cairo-Alexandria highway in Egypt on the anniversary of the January uprising.

His death is thought to have been carried out by members of the country's top security agencies, who were receiving information about the research into trade unions he was conducting whilst in the country.

Egypt has consistently failed to investigate the incident properly whilst Italy has secured huge arms and trade deals despite Regeni's family repeatedly calling on authorities to cool relations until the murder is solved.

In 2019 Egypt purchased three times more weapons, spare parts and military software from Italy compared to the year before which commentators said was to soften the Regeni investigation.

According to Alaraby Aljadeed, the policemen who Italy has requested information on were working for national security at the time Regeni was studying at the AUC.

Sources have said that one of them contacted Regeni's colleagues to find out what he was studying. Another phoned the head of the street vendor's union, Mohammed Abdullah, who previously gloated about handing Regeni over to security services after suspecting he was working for a foreign party.

The third officer wrote a report on Regeni's activities which was later used by other police who monitored him and, according to Italian prosecutors, contained facts inconsistent with Regeni's academic activities and mainly incited against him.

Prosecutors said that along with Major Magdy Sharif – who admitted to punching Regeni several times on the assumption he was a British spy – the three police officers managed Regeni's case and formed a network of informants around the Italian student along with his colleague and fellow researcher Nora Wehbe, his flat mate Mohammed Al-Sayyad and the head of the street vendors union.

In December 2018 five officers were under suspicion of Italian prosecutors, including Major General Khaled Shalabi, who is currently assistant interior minister for North Upper Egypt and Major General Tariq Saber who at the time worked as director in the national security agency.