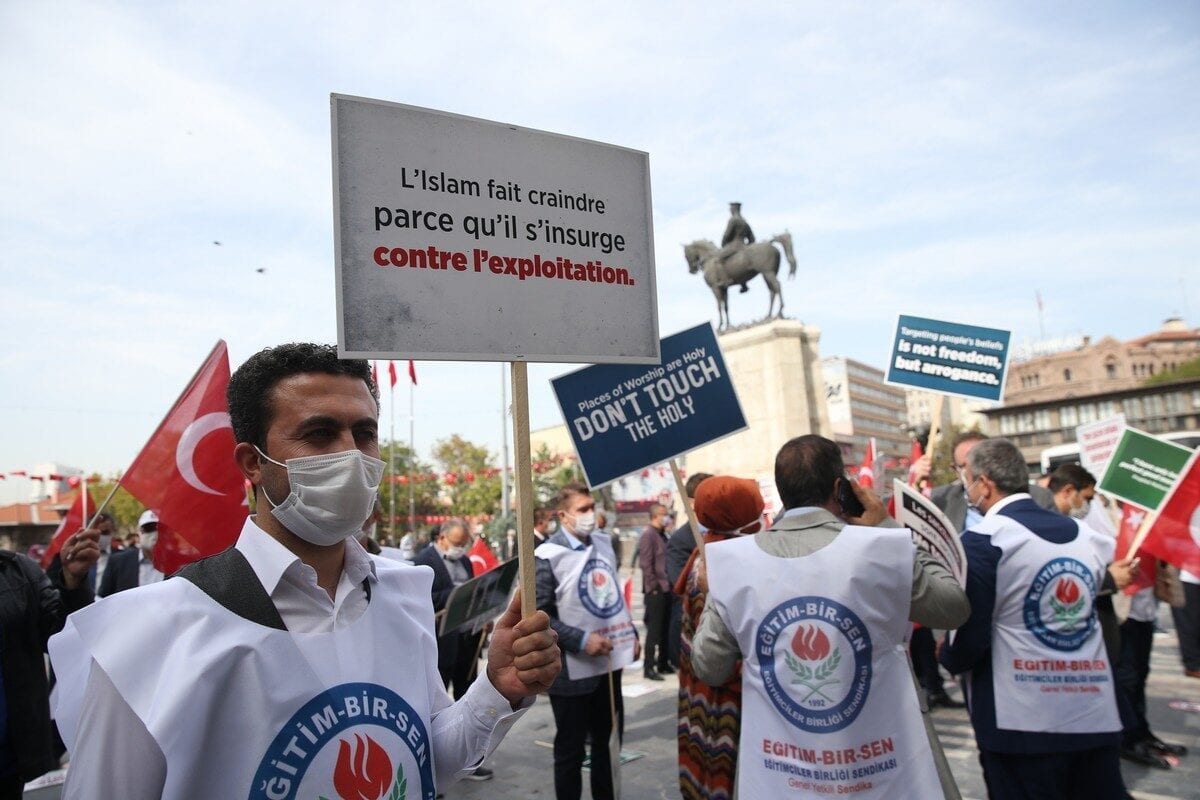 Protest against President of France Emmanuel Macron over his anti-Islam remarks in Istanbul, Turkey on 27 October 2020 [Doğukan Keskinkılıç/Anadolu Agency]
October 27, 2020 at 1:04 pm

The French Embassy in Turkey has issued a warning for French citizens within the country to remain vigilant and avoid public places, amid rising tensions and a diplomatic crisis between the two countries.

In a statement published on its official Twitter account yesterday, the embassy said: "Due to the local and international context, French residents or passing through Turkey are recommended to exercise great vigilance when traveling and in particular to avoid any gathering or demonstration in public places."

The embassy's warning comes as relations between Ankara and Paris have become increasingly strained over a number of issues, including their opposing sides in the Eastern Mediterranean where France supports Greece against Turkish maritime rights, and in Libya where Turkey supports the UN-backed government against the France-backed rogue General Khalifa Haftar.

Tensions were further exacerbated this month when French President Emmanuel Macron began launching a fierce campaign against what he called "Islamist separatism" and cracked down on Muslim non-governmental organisations within the country. Macron also refused to condemn disrespectful cartoons of the Prophet Muhammad (peace be upon him) being released, stating that France will not give up making the caricatures based on freedom of expression.

The politicisation of civilisations and ideologies: Macron, Charlie Hebdo and blasphemy in France

Turkish President Recep Tayyip Erdogan responded by saying Macron suffers from mental health issues and "needs treatment on a mental level," asking: "What else can be said to a head of state who does not understand freedom of belief and who behaves in this way to millions of people living in his country who are members of a different faith?"

In response to Erdogan's remarks, France pulled its ambassador from Turkey on Saturday, condemning the Turkish president's "excess and rudeness".

The French government's crackdown on the French Muslim community and its insistence on publishing the cartoons have been seen as insulting by many Muslims around the world and has prompted calls for a boycott of French products and brands.

Some Muslim-majority countries have already begun that boycott on a non-governmental level, such as in Kuwait and Qatar, while Erdogan officially called for a boycott in Turkey during a speech yesterday.

As a result, the French Foreign Ministry urged Middle Eastern states to prevent the boycott taking place and to clamp down on protests against the French government.