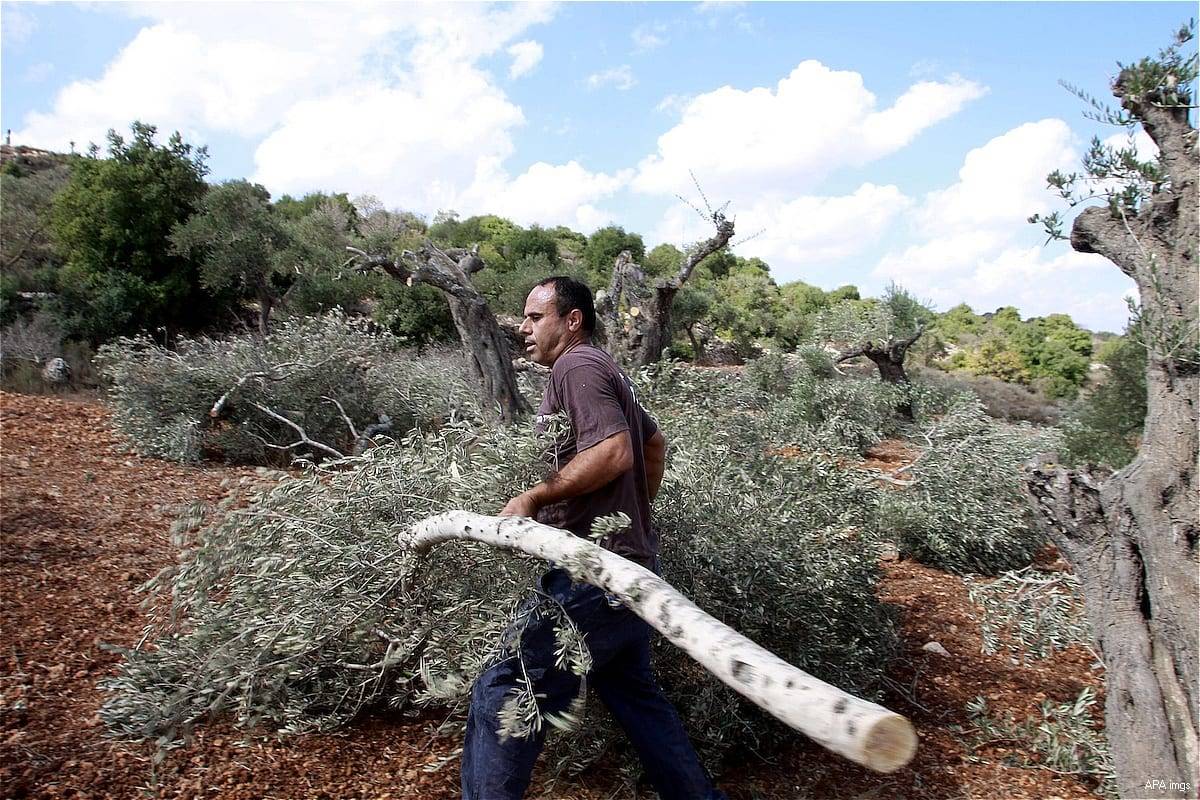 A Palestinian farmer inspects the damage done to his olive trees that were cut down by Israeli settlers on 11 April 2017 [Issam RimawiAnadolu Agency]
October 28, 2020 at 10:40 am

The UN Office for the Coordination of Humanitarian Affairs (OCHA) has said that the Palestinian olive harvest season, which started on 7 October, has been disrupted by illegal Jewish settlers.

In a report about the Israeli violations in the occupied territories, the report said that the olive harvest season was disrupted by people "believed or known to be Israeli settlers in 19 incidents".

The report said that "23 Palestinian farmers were injured, over 1,000 olive trees were burnt, or otherwise damaged, and large amounts of produce were stolen."

Most of the attacks took place near and around the city of Ramallah, the report said, noting that the settlers "stoned and physically assaulted Palestinian olive pickers on three occasions, triggering clashes."

However, the remaining injuries were recorded in farming areas near the town of Huwwara near Nablus and the villages of Ni'lin and Beitillu.

The report added: "Next to the Israeli settlement of Mevo Dotan (Jenin), about 450 olive trees were set on fire and destroyed shortly after Palestinian farmers from Ya'abad village were attacked there by settlers and forced out by Israeli soldiers."

It added: "A few hundred olive trees belonging to Palestinians from Saffa village (Ramallah), in the closed area behind the Barrier, were also set on fire and damaged."

Meanwhile, the report said: "In another ten locations adjacent to settlements, farmers found that their olive trees had either been vandalized or harvested, and the produce stolen, when they were able to reach them."

OCHA said that "several of the incidents took place in access-restricted areas, where the Israeli authorities allow Palestinians to enter two-four days during the entire harvest season."

The UN body reported that another four attacks by people believed to be settlers were recorded, noting that a one-year-old Palestinian baby was injured when the car he was travelling in was hit by stones in the Bethlehem governorate.

In nearby Al-Khader, the report said, 40 beehives were set on fire and burnt. In the Farsiya area of the northern Jordan Valley, Palestinian shepherds were physically assaulted by a group of settlers, and one of their sheep was killed.