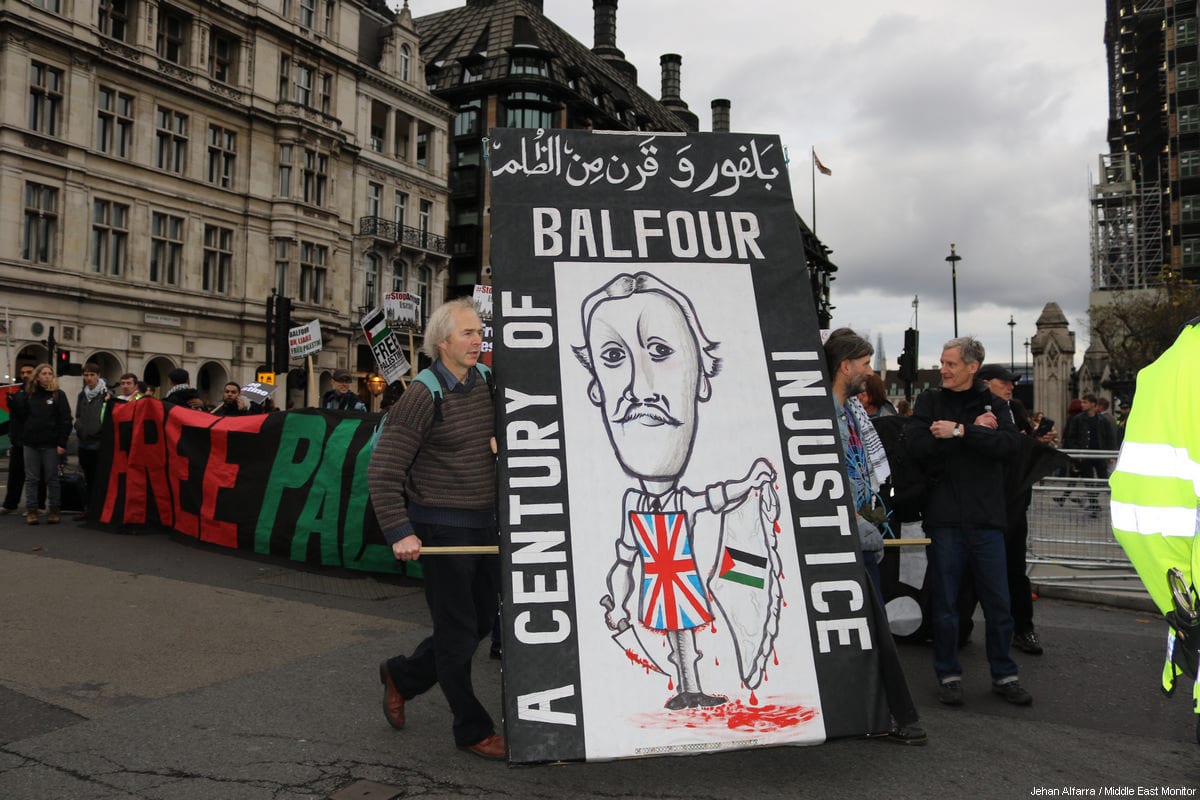 Londoners mark 100 years since Balfour Declaration in a protest to recognise the on-going oppression of Palestinians and calling for an apology from the British government, in London on 4 November, 2017 [Jehan Alfarra/Middle East Monitor]
Dr Nor Aishah Hanifa
November 5, 2020 at 9:41 am

The First World War started in 1914 due to the prevailing balance of power and alliances in Europe. The tipping point was the assassination of the heir to the Austro-Hungarian throne by a Serbian nationalist in Sarajevo. In the chain reaction that followed, Britain and its allies were pitched against the Central Powers led by Germany.

Palestine was part of the Ottoman Empire at the time, and the Ottomans sided with the Central Powers. The relatively new Zionist organisations lobbied Western governments, particularly the British, for support for their ideology and objective of settling Jews in Palestine in a state of their own. For reasons to do with helping Britain's war effort, the British cabinet favoured the Zionist approach about a "national home for the Jewish people" in Palestine.

"Making Britain a sponsor of the Zionist project would secure Palestine as a bulwark to the British presence in Egypt and the Suez Canal and act as a land link to India," claims Adel Safety in Might Over Right: How the Zionists Took Over Palestine. The British national interest in Palestine was transparent, and Palestine's fate was all but sealed, even though it was still part of the Ottoman Empire and not occupied by the British until December 1917.

Zionist lobbying paid off, and British Foreign Secretary Lord Arthur Balfour sent a letter to Lord Lionel Walter Rothschild on 2 November 1917 — a month before British troops entered Jerusalem — which included a "declaration of sympathy with Jewish Zionist aspirations" for the "establishment in Palestine of a national home for the Jewish people". This was the infamous Balfour Declaration with ambiguous wording — it promised support for a "national home", not a state, for example — and a description of the indigenous Palestinians as "existing non-Jewish communities". The process to eradicate Palestinian identity had begun. Balfour himself later admitted that a Jewish state was always the intention.

READ: Amazingly, the PA condemns Balfour while sticking to the two-state compromise

US President Woodrow Wilson was also known to favour what Balfour promised. This was important for Britain, which wanted to ensure that the US remained as an ally having entered World War One in April 1917. As Safty says, "Now with the Balfour Declaration promising imperial power support for the Zionist programme, the confrontation with Palestinian nationalism in its own land became inevitable."(Safty, ibid, p26)

The Balfour Declaration was a document drafted in war time for the purpose of fulfilling imperial ambitions. The late Palestinian-American Professor Edward Said asserted that Balfour was "made by a European power… about a non-European territory… in a flat disregard of both the presence and wishes of the native majority resident in that territory". Little thought was given to the fact that it contradicted the Westphalian values advocated in Europe and the West since 1648, including the sovereignty of nations and nation states, non-interference in the affairs of a foreign land and self-determination for all people. This was all rejected in the early years of the 20th century when realpolitik dictated international affairs. The Balfour Declaration (known as the "Balfour Promise" in Arabic) was one of a number of deceptions played on the Arabs and Palestinians.

In 1916, the Sykes-Picot Agreement was drawn up between Britain and France. It prepared a ground plan to carve up the Ottoman territories in the Levant into British and French spheres of influence. Palestine and Jerusalem were intended to be under an "international administration". France, however, was known to be sympathetic to Zionist ambitions in Palestine.

Sykes-Picot followed a chain of correspondence started in 1915 between the British and Sharif Hussein of Makkah, in which a promise was made to establish an independent Arab state if the latter helped the British against the Ottoman Turks. A letter from Sir Henry McMahon, the British High Commissioner in Egypt, confirmed that Palestine was to be included in that state. The British government later denied that this was the case. The official Hussein-McMahon correspondence was only made available to the public in 1939.

The British Foreign Secretary in 1915 was Sir Edward Grey. He wrote in his memoirs that: "There were two secret treaties… made in the earlier part of the war, and that were important. One was the promise to King Hussein that Arabia should be an independent Moslem [sic] state. This was only one of these secret treaties that was due to British initiative and for which we had a special responsibility greater than any other Allies." The British deliberately betrayed Sharif Hussein and exiled him to Cyprus. He died in Amman in 1931. 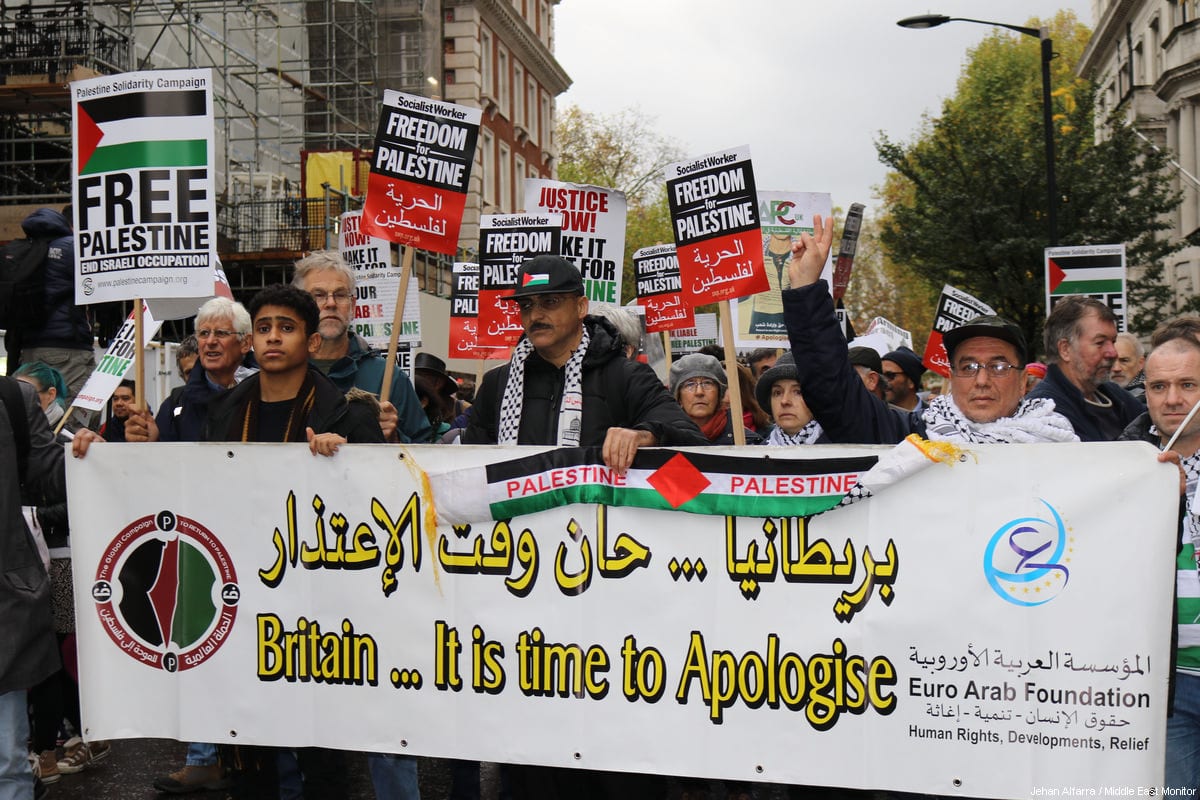 Londoners mark 100 years since Balfour Declaration in a protest to recognise the on-going oppression of Palestinians and calling for an apology from the British government, in London on November 4, 2017

The fact that Britain had made conflicting promises to the Arabs and Jews regarding Palestine was picked up in open parliamentary debate in 1922. That's when Lord Islington introduced the debate on the Palestine Mandate in the House of Lords and declared, "The mandate for Palestine in its present form is unacceptable to this House, because it indirectly violates the pledges made by His Majesty's government to the people of Palestine in the Declaration of October 1915 [the McMahon promise] and again in the Declaration of November 1918, and is, as at present framed, opposed to the sentiments and wishes of the great majority of people in Palestine…" The Lords rejected the policy but this decision was reversed by the House of Commons; Winston Churchill had a major influence over the MPs at the time. Realpolitik triumphed again.

Thus the British made three promises during the First World War: that Sharif Hussein would have Palestine within his Arab state; that Palestine, including Jerusalem, would be under an "international administration"; and that the "Jewish people would have a "national home", which we now know meant a state. These promises had serious implications and consequences for the Middle East and its people, not only the Palestinians. Only one of the promises was honoured by the British.

READ: Palestinians are suing Britain, and why not?

With British and American backing, and the Balfour Declaration incorporated within the British Mandate for Palestine issued by the League of Nations effective from 1923, the Zionists were able to colonise Palestine year on year and go on to establish Israel as a "Jewish state" in May 1948. Although Zionist terror gangs had attacked the British authorities in Palestine throughout the later mandate period, Britain actually supported Jewish migration to the country and helped to arm and train troops who would go on to join the nascent Israel Defence Forces. The "non-Jewish communities" in Palestine had been betrayed because the rider contained in the Balfour Declaration — "it being clearly understood that nothing shall be done which may prejudice the civil and religious rights of existing non-Jewish communities in Palestine" — was simply ignored.

The root cause of the Arab-Israel War in 1948/49 was, therefore, Britain's broken promises. The British government should acknowledge this and seek to rectify its historical wrong against the Palestinians.

Theirs is a struggle that is not going to simply disappear. People living under military occupation have a legitimate right to resist that occupation, and the Palestinians continue to resist Israel's occupation and colonisation of their land.

Efforts are now being made to sue the British government. It may simply be a symbolic move, but symbolism carries a lot of meaning for the Palestinians. Whatever happens, it sends a powerful message to the British government that it needs to pay Britain's debt to Palestine and its people.

International law often sides with the powerful in this world, but in this instance the Palestinians have the law on their side, unequivocally so. Legally and morally, therefore, the British have to act in the Palestinians' favour. History is likely to judge Britain very unfavourably on many issues, not least the fact that it broke those three promises with incalculable, lasting and ongoing damage to the people of Palestine.