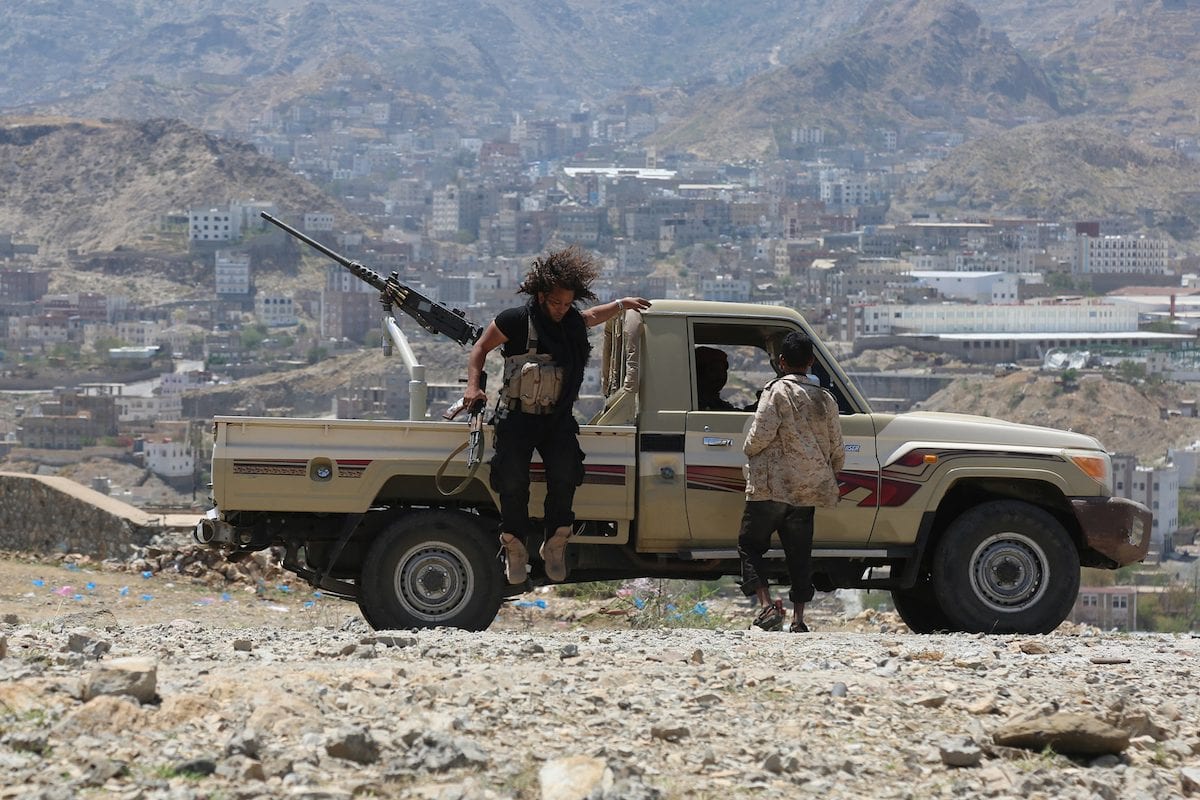 Government forces attack positions of Houthis and pro-Saleh militants during an operation in Taiz province, Yemen on 6 April 2017 [Abdulnasser Alseddik/Anadolu Agency]
Ali Al-Thahab
November 17, 2020 at 11:33 am

When Yemen's Houthis and their then ally former President Ali Abdullah Saleh decided to attack the southern governorates in February 2015, the move came just a month after President Abdrabbuh Mansour Hadi had fled to Aden. The destiny of the Taiz governorate to the north west of Aden was to take up arms to confront the Houthis and the Yemen Army units that had joined their ranks. The popular resistance was formed there, along with part of the army's 35th Armoured Brigade that refused to surrender to the Houthis, which thus formed the nucleus of the army loyal to Hadi in Taiz.

The war has affected Taiz for more than five and a half years, especially its administrative centre, Taiz city, where most of the fighting has taken place. Dozens of soldiers and civilians on both sides, including women and children, die or are wounded on a daily basis, as if the goal of those controlling the conflict is to exhaust everyone involved. This is similar to what happened in the six conflicts in Sa'dah between the Houthis and Yemeni government between 2004 and 2010. There seem to be objectives unknown to us that still haven't been achieved.

Taiz was the first to stand up to the Houthi advance towards the southern governorates but did not receive enough support to regain full control over its territory, as the south has, especially Aden, Shabwah and Lahj, or at least such as Al-Dhale'e and Marib. This is despite all of them entering the war after Taiz. Moreover, the prime minister and speaker of parliament, as well as many members of the government and MPs, senior army officers, and senior police and intelligence officers, as well as advisers to President Hadi all belong to Taiz and participate in the political, economic, military and security life of the state.

The dimensions of the internal, regional and international game played in Taiz are clear, and the evidence is that the Houthis are satisfied with blockading its northern approaches; confrontations have been a hesitant mix between fight and flight. In the south, the separatist Southern Transitional Council, through its UAE-backed militias, is trying to stabilise the Houthis on the border of Taiz. That was the border when Yemen was divided into two states before reuniting in 1990.

This was an attempt to impose a forced demarcation for the separation of the country into two distinct states again. This explains the STC's procrastination in implementing the military and security arrangements included in the Riyadh Agreement signed with the Hadi government in 2019. The dimensions of this game are completed by the coast of Taiz, which includes the Bab Al-Mandab Strait and the port city of Mocha, falling into the hands of another wolfish opponent in sheep's clothing, the Republic Guards, which receive direct military support from the UAE.

Hence, Taiz looks like it is flying with one wing, which may take it out of the power equation in the ongoing conflict if it suffers the fall that threatens it more than the city of Marib, which is only facing the threat of the Houthis. Such a fall would mean the end of the federal state project, and then Taiz's entry into political settlements, as happened with Hodeidah, in accordance with the 2018 Stockholm agreements. The latter included what are known as the "Taiz understandings", as if it were a deliberate introduction to what foreign powers are planning in cooperation with their local agents.

The last fortress of Taiz is the awareness (and will) of its people who overthrew Saleh, and drove the Houthi groups to its northern gate, but this is not enough in the face of the threat of the "triangle of evil" that lurks today. Hence, it requires a review of the management of the liberated area, politically, economically and militarily. This is what the government that will be formed under the Riyadh Agreement should undertake. The Governor of Taiz still runs it from exile, and its military and security sectors are, to some extent, separate from the two heads of the organisational hierarchy. Moreover, resources are scarce because they are divided between the parties to the conflict and corrupt official leaderships in various institutions.

In short, Taiz is facing a number of internal and external dangers that both opponents and friends are standing behind and the popular will and awareness remain a source of its desperate defence because it is actually the defence of the unified Yemen state project. It also thwarts foreign agendas that gnaw at the body of the country from every side, from Taiz to Bab Al-Mandab, Socotra and Al-Mahrah, and from Sa'dah to 'Amran, Sanaa, Dhamar and Hodeidah.

READ: Strategic base in Yemen's Marib falls to Houthi forces

This article first appeared in Arabic in Al-Araby Al-Jadeed on 16 November 2020.