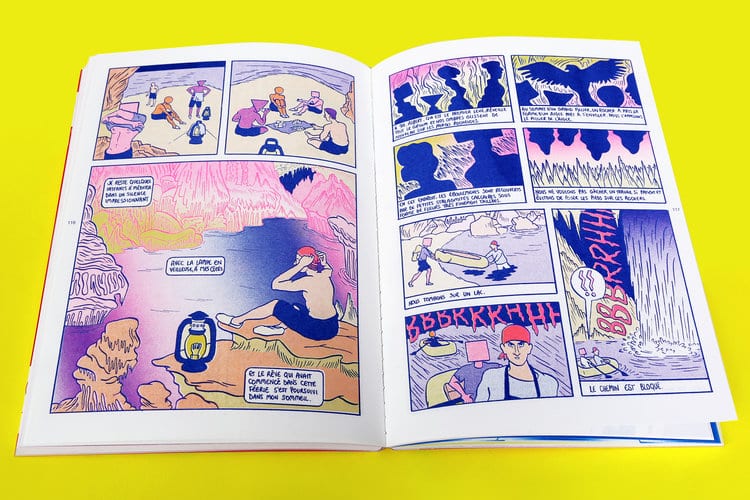 In ancient mythology it was believed that salamanders are born from fire. No metaphor would be more fitting for the Lebanese artists who need to rise from the ashes at this time. Samandal — the Arabic word for salamander – is thus the name that a group of Lebanese comic book artists have adopted for their non-profit organisation.

Founders Omar Khouri, Hatem Imam, Lena Merhej, the Fdz and Tarek Naba'a initially thought of the dual habitats of these amphibious creatures, because Samandal comics thrive between two worlds: image and text; the experimental and the traditional.

Since 2007, the group has dedicated itself to the advancement of the art of comics in Lebanon and around the world. They have published 15 magazines, five comics' anthologies and two graphic novels, and hosted a number of comics-related events. Over the years, Samandal has also welcomed new members. Their names are familiar to those following the Arab comic book scene: Barrack Rima, Joseph Kai, Raphaelle Macaron, Karen Keyrouz, Nour Hifaoui and Tracy Chahwan.

In these difficult in Lebanon and elsewhere, the group have kept working on their individual and collective projects. Their commitment to their craft bears witness to an unshakable trust in the power of art and culture to heal.

As one of the founder members, Lena Merhej remembers a special energy right after the 2006 war. "We had been talking about doing a magazine for a while," she recalls, "so we started by creating a fanzine and distributing it among our friends." To their amazement, they found a big audience for issue 0, which really encouraged them. "For the following issues we invited more artists and started taking Samandal Magazine around different countries four times a year, with events like workshops and exhibitions."

Barrack Rima came to know about Samandal in 2007, through mutual friends. He submitted a story of 20 pages, which was published in the first issue of Samandal Magazine. He joined the collective officially when he met the founders in person and they became friends.

Karen Keyrouz became part of Samandal more recently; she was invited by Josef Kai. "Samandal was well-known when I was in university," she tells me. "It was the coolest comics collective in Lebanon, and the only one at that!" After graduation in 2016 she was invited to publish a Samandal anthology called Geography. "From there, my relationship with the collective was created organically; I started helping Samandal by sorting books and participating in events, and I kept publishing my work."

Rima left Lebanon in 1990 and moved to Belgium. He refers to Samandal as family, and notes that the group keeps him connected to Lebanon and encourages him to create comics in Arabic. "I used to write them in French or Dutch. Because of Samandal, I now have an Arabic readership that encourages me to create in my native language."

Over the years, the collective has acted like a support group for different projects and initiatives, making its members grow individually and collectively. "In the artistic realm, the importance of sharing, of working together, is crucial," explains Merhej, who also thinks of the collective as a family. "Everything is very precarious here in Lebanon. There is no market and it's difficult to sustain; we have had several issues with funding for our projects."

Keyrouz points out that in a country where the government doesn't support culture, it's natural for artists to come together. "After all, any kind of collective is created because people know that together they have a louder voice. At the same time I personally feel it's very beautiful and helpful that in a group we can share the same interests, goals, dreams and even problems. A problem is less harsh when it's shared and tackled together."

For her, Samandal set the example for young people who are considering an artistic career. "Ten years ago students who decided to make comics for a living were leaping into the unknown. Now you see many more artists making comics. To have a precedent is a big encouragement."

Indeed, a lot has changed since the first days of Samandal. When they first started there was no comics' scene in Lebanon, apart from a satirical magazine. Now there are several comic book authors and illustrators, with much more exposure.

Among the generational changes, Lena Merhej has noticed that her peers were self-taught, whereas the new generation of artists have studied comics and art in university. They are really aware of their field and they know all the trends. "With Samandal, when we started publishing we were inclusive of styles that might have been on the fringe of the comic book scene. We try to push the boundaries and include different narratives."

Barrack Rima points out that although children's comics have existed for a long time in the Arab world, Samandal has made a major contribution to the awareness of this particular medium of expression for adults. "When we started, there were few adult readers for comics. There was space for experimentation, and so Samandal opened the doors for many artists to build a sense of purpose and confidence in their work." He has since noticed other collectives springing up not only in Lebanon, but also in Egypt, Tunisia and Iraq.

Karen Keyrouz believes that the scene keeps growing by itself: "People are doing and reading more comics and Samandal itself keeps developing, although everything is stopping right now because of what is happening in Beirut." It is, she adds, a really bad time to be in Lebanon, artist or not. "The problem is that it's not only one crisis, but a series of crises that appear to be never-ending. It started with the economic crisis a year ago and now there's the pandemic, as well as the revolution that is trying to fight corruption. On top of all that, the massive explosion in August destroyed large parts of the capital. People are not in control of their lives any more. It's not only affecting the art scene, but every human being in Lebanon."

She was in Beirut on 4 August. "After the explosion life carried on, but I don't think I cope well. I'm still digesting what happened and what is still happening. I don't feel the need to chronicle life through art at the moment, though; maybe in the future."

In these difficult times for Lebanon and the world, Samandal artists have kept on working on their projects, individually and together. Being in a collective brought some much-needed support together with accountability towards the group. This is what kept Keyrouz afloat. "I needed to create some distance around everything that happened this year in Lebanon. So I am in France for a three month residency, and am focused on my personal and collective projects."

Lena Merhej believes that putting on paper their experience of what is happening in Lebanon helps tremendously. From a reader's perspective, art can offer some relief from suffering. "Particularly in moments that are difficult and you cannot make sense of things, music, literature and comics become survival aids."

She is convinced that an artistic rebirth is possible. "I trust that after all this damage, something strong and beautiful will happen. As children we experienced the trauma of the war, but when that ended, a wonderful time came about. That's when a lot of us began pioneering projects, and we started Samandal. This will happen again in Lebanon. It's happening already with new voices in our collective who are projecting different ideas and initiatives."

Barrack Rima is on the same page; arts and culture are crucial in times of social, existential and political crisis. "The arts are not only a medicine to give hope to the people," he says. "One of its roles is also to reflect on the meaning of our experiences, and give them a symbolic interpretation. It's a way to bring consciousness to the people. Not as some sort of miracle solution, but rather as a tool to make us reflect about what we are looking for in our collective human adventure. It makes us push through, resist or revolt."

Or, he might have added, let our spirit be reborn from the ashes. Samandal lives on.