'The Palestinian cause is our cause,' says Venezuelan Labour leader

Under the presidencies of Hugo Chavez (1999-2013) and now Nicolas Maduro (2013-present), Venezuela has undergone significant changes in its political economy. One notable area of change has been foreign policy. The Venezuelan government's rhetoric and policies towards the Israeli-Palestinian conflict under both Chavez and now Maduro have expressed a strong sense of solidarity with the Palestinian cause while regularly denouncing Israel's policies of occupation and apartheid. Venezuela has spearheaded diplomatic efforts against Israeli aggression and has established close diplomatic and economic ties with the Palestinian Authority, including oil deals, emergency aid and scholarships for Palestinian medical students.

In 2009 the Venezuela government broke off relations with Israel in response to its "Operation Cast Lead" attacks on the Gaza Strip which resulted in the death of 1,417 Palestinian, according to the Palestinian Centre for Human Rights. Chavez accused Israel of "state terrorism" and said that Israel's hostilities had "cost the lives of the vulnerable and innocent: children, women, and the elderly." In 2011, the Chavez government supported Palestine's attempt to be recognised as an independent state by the UN, with pro-Palestine demonstrations held around Venezuela. The president wrote a personal letter to the UN General Secretary advocating Palestinian statehood and criticising the "barbarism" of Israeli policy towards the Palestinian people. In November 2012, President Chavez condemned Israel's "Pillar of Cloud" air strike campaign in the Gaza Strip as "savage", and called for an end to "aggression" against the Palestinians.

Following Chavez's death from cancer in March 2013, under President Nicolas Maduro Venezuela has continued to express solidarity with Palestine. In July 2014, during the Israeli army's "Operation Protective Edge" attacks, again on the Gaza Strip, Maduro launched an "SOS Palestine" campaign to demand an end to Israel's ongoing bombardment. "Enough already, I've joined the campaign. #SOS Palestina, let's launch it," he told supporters during a televised broadcast. Maduro asked fellow citizens to join the campaign, stating, "The Palestinian people have the right to live in their ancestral lands in peace… our international position over the issue of Palestine is just and follows the policy of comandante Hugo Chavez."

Venezuela was not alone in condemning Israel's assault on Gaza. As Dr Daud Abdullah wrote in an August 2015 article for MEMO, "Every successive attack brought forth waves of solidarity in Latin American countries, with some going so far as to expel Israeli diplomats and recall their ambassadors from Tel Aviv." By the end of the 2014 attacks on Palestine, five Latin American countries — Ecuador, Brazil, Peru, Chile and El Salvador — withdrew their ambassadors to Israel in protest. In Bolivia, which like Venezuela had broken diplomatic relations with Israel in 2009, President Evo Morales called Israel a "terrorist state." 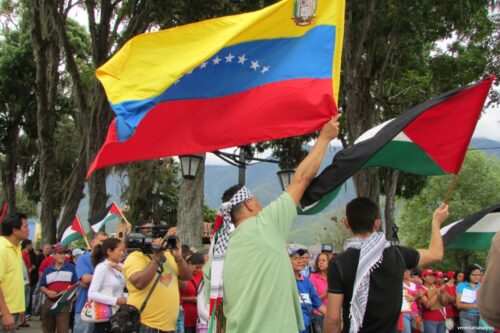 In Venezuela people took to the streets in solidarity with those in Gaza and to protest against the Israeli government's attacks. In May 2015, during a visit to Venezuela, Palestinian Authority Foreign Minister Riyad Al-Maliki declared that Venezuela "is Palestine's most important ally." It's a country that gives without asking for anything in return, he added. 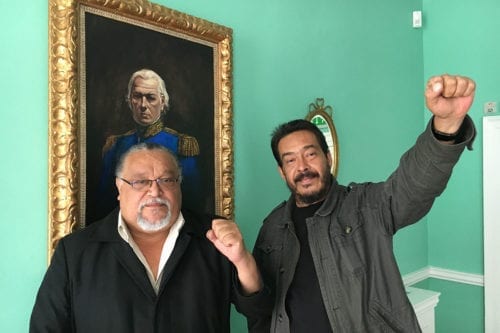 Wills Rangel, the President of Venezuela's largest trade union "central", the Bolivarian Socialist Union of Workers (CBST), and Jacobo Torres, the CBST's International Officer, recently visited Britain. The CBST is comprised of 17 of Venezuela's 19 trade union federations and includes around 2.5 million workers, over 85 per cent of the total number of workers organised in trade unions in the country. During their visit they spoke to MEMO about the solidarity with the Palestinian people of the Venezuelan government and organised labour movements.

The prominence that the Palestinian people's cause has had in Venezuela is down to Chavez. That's why we often talk of things in terms of before Chavez and after Chavez. So, before Chavez most Venezuelans had no real knowledge of the Palestinian-Israeli issue. The governments prior to Chavez's presidency made real efforts to deny us our own history and were we told much less about what was happening to our Palestinian brothers and sisters.

Chavez was always very clear about the need for solidarity with Palestine and laid down the ideological lead to follow in relation to the issue. We have excellent relations with Palestine's ambassador to Venezuela. In my role as CBST president I would like to give a warm greeting to the Palestinian people and to let them know that Venezuelan workers and organised labour are their brothers and sisters, and their unconditional allies.

One of the things that's important to remember is that the first person to break diplomatic relations with the Zionist state was our commander Hugo Chavez Frias, after that infamous episode of state terrorism unleashed on the Palestinian people, principally to those in the Gaza Strip. And if I remember correctly, Venezuela was the first country to recognise Palestine as an independent state and was also the first country to name an ambassador to Palestine. In Venezuela we have the Palestinian ambassador, with whom we have excellent relations.

On the other hand, our relations with the Palestinian movements have a long history. The relations are not only with the resistance movements but with all the Palestinian diplomatic representatives in Latin America. Every so often we meet up with them in Venezuela and we support them in their campaigns denouncing the actions of the Zionist state. This is important because one thing that gives meaning to a revolution such as ours, which calls itself Bolivarian 1 and therefore cannot be exclusionary, is to be clear that the Palestinian cause is our cause. This is in the sense that it is not just about the systematic abuse of Palestinian human rights, but rather, in the same way we talk about the right of people to self-determination and the sovereignty of nations, we recognise in the Palestinian state a sovereign state and a sister nation.

I think it's important to note that one of the most important waves of migration to Venezuela in the last 40 years has been the migration of Arabs to Venezuela. 2 We have many Venezuelan comrades who are of Syrian, Lebanese and Palestinian heritage who embrace the Palestinian cause and who are part of our revolutionary process.

We have said that we don't have any issues with Judaism as a religion; we have no issues with the Jewish people. What we condemn, however, is the Zionist state, which since its creation in 1948 has repressed the Palestinians thanks to the imperialist and colonialist force of the hour, the United States. The US has used Israel to prevent the development and sovereignty of the Arab states. Following the example of our commander [Chavez], who made it his mission always to be proactive in defending the Palestinian people, we as revolutionaries will always stand next to our Palestinian brothers and sisters, wherever they may be.

1 Venezuela's political process since the election of Hugo Chávez is often called the "Bolivarian Revolution" after the early-19th century Venezuelan revolutionary leader Simón Bolívar, who was a prominent figure in the Spanish American wars of independence that sought independence from Spanish rule.

2 There are around 1,600,000 Venezuelans of Arab origin, mainly from Syria, Lebanon and Palestine. Arab Venezuelans are estimated to comprise around 5 per cent of Venezuela's population of 31.4 million people.