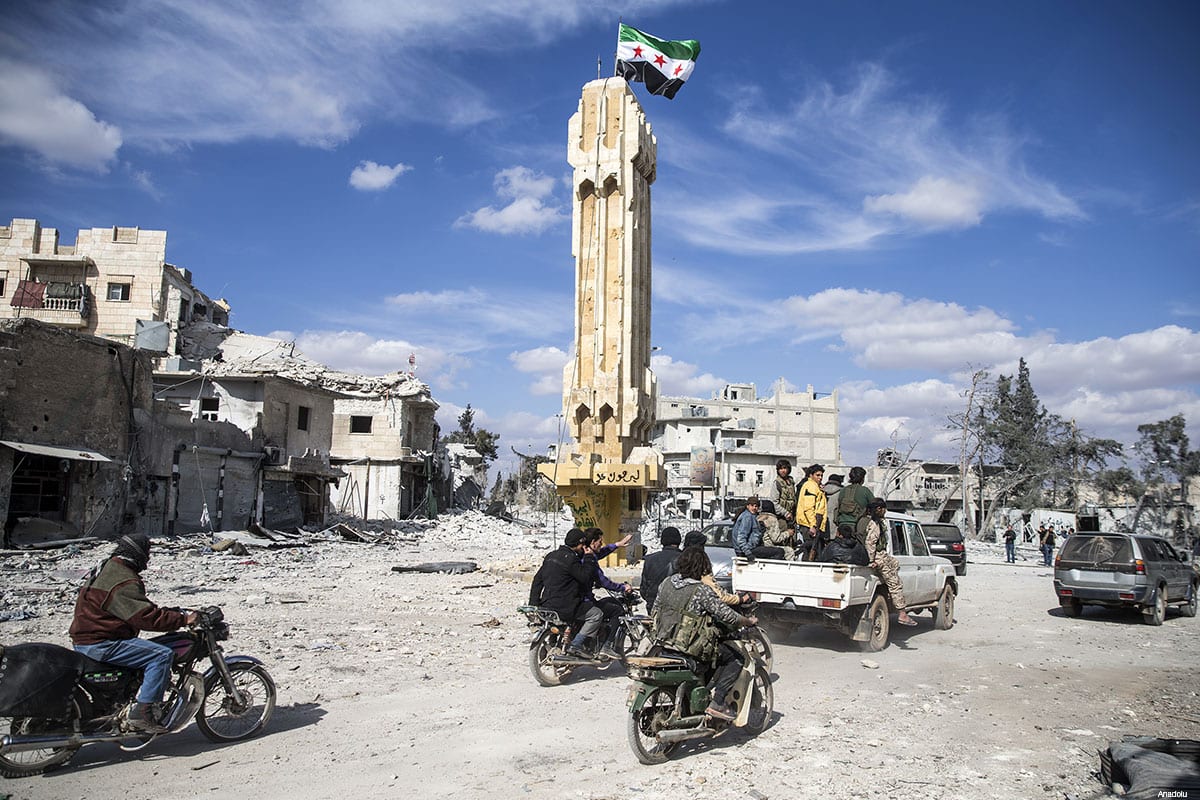 Members of the Free Syrian Army (FSA) patrol as they continue to clean land mines in the Syrian town of Al Bab after the town had been liberated from Daesh militants as part of Operation Euphrates Shield, in Aleppo governorate, Syria on February 24, 2017 [Emin Sansar / Anadolu]
February 26, 2017 at 1:54 pm

The Syrian army and its allies made a sudden advance on Saturday and Sunday into areas held by Daesh in northwest Syria, a war monitor said, as the militant group retreated after losing the city of al-Bab to Turkey-backed rebels on Thursday.

On Sunday, the army also took the town of Tadef, just south of al-Bab after Daesh withdrew from it, state television reported. Earlier this month, a senior Russian official said Tadef marked an agreed dividing line between the Syrian army and the Turkey-backed forces.

The eastwards advance in an area south of al-Bab has extended Syrian army control across 14 villages and brought it within 25km (15 miles) of Lake Assad, the stretch of the Euphrates above the Tabqa dam.

Daesh's holdings in northwest Syria have been eviscerated over recent months by successive advances by three different, rival forces: Syrian Kurdish groups backed by the United States, the Turkey-backed rebels, and the army.

By taking Daesh territory south of al-Bab, the army is preventing any possible move by Turkey and the rebel groups it supports to expand southwards, and is moving closer to regaining control of water supplies for Aleppo.

Erdogan: Turkish operation in Syria will continue to Raqqa

Fighting in the area is continuing as the army and its allies advance, the Syrian Observatory for Human Rights, a Britain-based war monitor, said on Sunday.

Daesh's loss of al-Bab after weeks of bitter street fighting marks the group's effective departure from northwest Syria, once one of its most fearsome strongholds, and an area of importance because of its location on the Turkish border.

Steady advances since 2015 by the Syrian Democratic Forces, the Kurdish-led alliance of armed groups, had already pushed Daesh from much of the frontier by the middle of last year and have since then threatened its stronghold in Raqqa.

Turkey's entry into Syria's civil war via the Euphrates Shield campaign in support of rebel groups fighting under the banner of the Free Syrian Army was intended both to push Daesh from the border and to stop Kurdish expansion there.