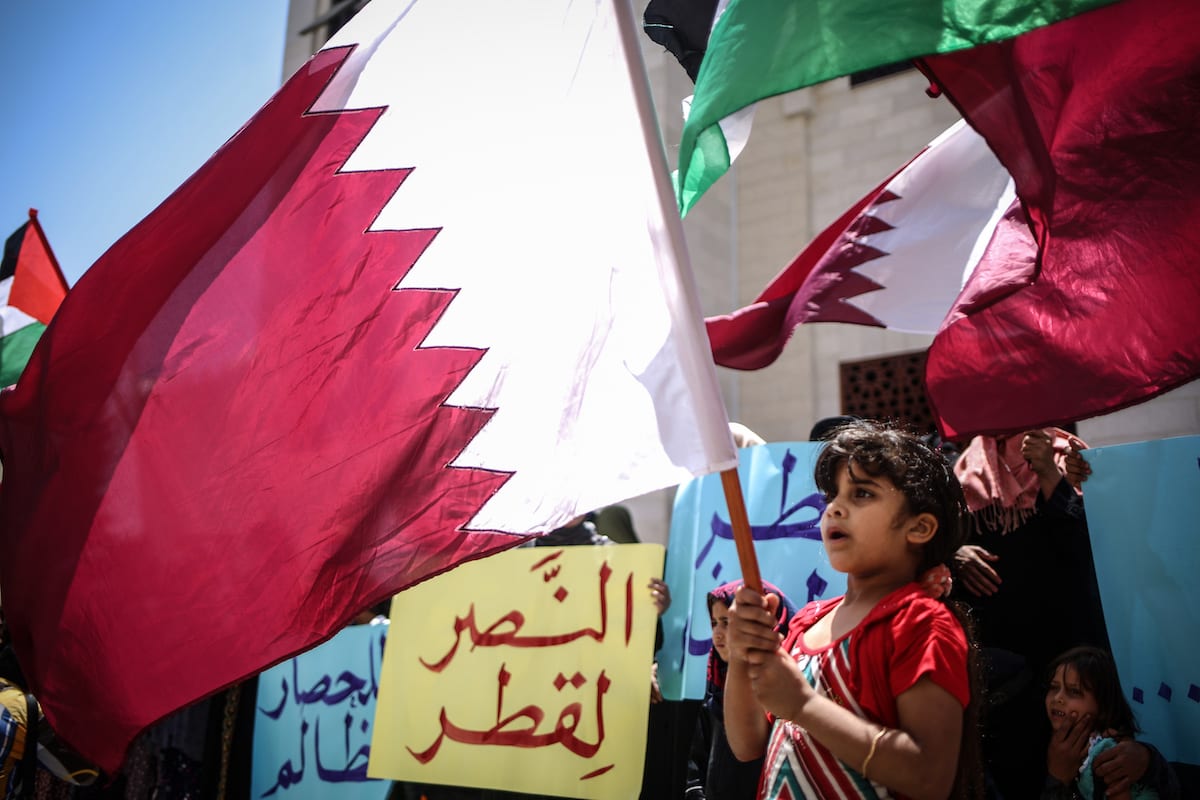 Palestinians hold Qatari flags during a demonstration in support of Qatar, in Khan Yunis, Gaza on 14 June 2017 [Ali Jadallah/Anadolu Agency]

It seems that even Israel is now reassessing its initial stakes in the Gulf crisis and re-examining the implications of the crisis for its various interests. Israeli circles no longer believe in the ability of the countries imposing the siege on Qatar to manage the crisis, to the extent that current assessments in Tel Aviv are almost unanimous in warning that it will have a negative outcome.

When the crisis first broke Tel Aviv concluded that it would contribute to improving Israel's regional standing, developing its ability to confront strategic threats and expanding and deepening co-operation with Arab countries, especially those leading the boycott against Qatar.

The degree to which Israel reveled in the crisis between the Gulf States was evident in the enthusiasm of the Minister of War, Avigdor Lieberman, who argued that the demands of the countries placing it under embargo represent a set of common interests, which lay the ground for strategic co-operation.

The conclusions reached within strategic circles in Tel Aviv all centred around the assessment that the Gulf crisis increased Israel's chances of establishing an environment in which it had a greater number of tools to further restrict Palestinian resistance in the Gaza Strip.

Israel's disdain for the leaders of the countries besieging Qatar reached the point where they were calling on these leaders to use their financial leverage to entice the Palestinian resistance to cease its efforts to strengthen its military power – a goal that Israel has not been able to achieve after three wars and the imposition of a severe siege on Gaza.

The Israeli National Security Research Centre did not hesitate to urge decision-making circles in Tel Aviv to exploit the Gulf crisis, and specifically to ask the UAE to propose to Hamas, through the Fatah leader Mohammed Dahlan, to carry out reconstruction projects in the Gaza Strip (instead of Qatar) on the condition that the movement agrees to "stop manifestations of its increasing military power," according to Mabat Aal Magazine.

However, with the continuation of the Gulf crisis and the lack of signs that the end is in sight, there are clear indicators that Israeli confidence that this crisis will produce positive outcomes is waning, while more people are warning that some of the opportunities of the crisis are now becoming risks.

Almost all literature published by Israeli research centres and media is currently warning against the danger that the Gulf crisis will contribute to strengthening Iran's regional standing, rather than weakening it.

Read: We, Sunni Arabs, except Qatar, in the same boat, says Israel's Ya'alon

According to this literature, the crisis will make Israel's regional environment more complex and dangerous, as it could lead to a Turkish-Iranian national rapprochement that could create a new axis that would diminish Israel's ability to achieve its interests.

According to the Israeli National Security Research Centre, one of the serious repercussions of the Gulf crisis is the possibility that its continuation will contribute to the disintegration of the Gulf Cooperation Council, further weakening the Zionist entity's regional environment, considering that Israel benefited from the role of the Council as the only Arab regional system that worked against Iran.

As Israel sees the effective role of the United States in the region as one of the pillars of its national security – since Tel Aviv uses this role to deter other regional powers – some Zionist assessments warn that prolonging the Gulf crisis will weaken Washington and reduce its role in the region due to divisions among its allies.

The Begin Sadat Centre for Strategic Studies has expressed disappointment that the Trump administration, instead of throwing its weight behind ending the current crisis and thus ensuring stability in the region, is only interested in securing greater financial returns from arms deals with the countries of the region, which gives Iran the opportunity to strengthen its position and enable it to achieve its ambitions.

The Centre warns that if the Gulf crisis persists and American indifference continues, and if the economic situation within the countries of the region, particularly Saudi Arabia, becomes more problematic, Iran will not only devour Bahrain but will also share influence and control in the Arabian Gulf with Russia.

Regardless of how likely these scenarios are Israel's gambles on the outcome of the Gulf crisis have become less optimistic. Contrary to the calculations of the embargo countries influential Zionist elites see that the biggest mistake by the embargo countries lies precisely in their inaccurate assessments of Qatar's ability to withstand the embargo, as the right-wing orientalist Eyal Zisser concludes.

Another source of concern over the repercussions of the Gulf crisis shared in both Tel Aviv and Washington, which US and Israeli officials do not publicly express, is their lack of confidence in the ability of Saudi Crown Prince Mohammad Bin Salman to make wise decisions.

The former US ambassador to Tel Aviv, Daniel Shapiro (a researcher at the Israel National Security Research Institute), reveals that the major flaws in the conduct of the war on Yemen have not only reduced American and Israeli confidence in Bin Salman's ability to manage the crisis with Qatar, but have also led to Washington being determined not to allow him to take any steps against Iran that could adversely affect American and Israeli interests.

In an article published in Haaretz, Shapiro wrote, "If a situation arises in which Iran has to be confronted, the decision to confront it must be made in Washington and Tel Aviv, and not in Riyadh". The question is, do the embargo countries have a real response to the reasons behind Israeli concerns?

This piece was first published in Arabic in the New Khaleej on 20 July 2017.