Stepping up efforts to isolate autonomous Kurdish-held northern Iraq, whose people endorsed secession in a referendum on Monday that angered neighbouring countries, Baghdad demanded that foreign governments close their diplomatic missions in the Kurdish capital Erbil.

Final results released on Wednesday showed nearly 93 percent in favour of independence, and 7.3 percent against. More than 3.3 million people, or 72 percent of eligible voters, took part in Monday's ballot, according to the electoral commission.

The referendum has stirred fears of a new regional conflict. An Iraqi armed forces delegation headed to neighbouring Iran to coordinate military efforts, apparently as part of retaliatory measures taken by the government in Baghdad following the vote.

Iran and Turkey also oppose any move towards Kurdish secession and their armies have started joint exercises near their borders with Iraqi Kurdistan in recent days. Iraq and Turkey have also held joint military drills.

Foreign airlines began suspending flights to Kurdish airports after the Iraqi Civil Aviation Authority said on Wednesday that international flights to Erbil and Sulaimaniya would be suspended from 1500 GMT.

Kurdish authorities rejected Baghdad's demands that they should annul the referendum as a condition for dialogue and hand over control of their international airports.

On Wednesday evening, Kurdish Rudaw TV reported that the Kurdistan Regional Government had offered to hold talks with Baghdad about hosting Iraqi observers at Erbil and Sulaimaniya airports to help defuse the crisis.

Turkey, which has threatened to impose sanctions on the Kurds, said its border with northern Iraq remained open, although it may not remain so. The number of trucks passing through had however decreased.

Home to the region's largest Kurdish population, Turkey has been battling a three-decade insurgency in its largely Kurdish southeast and fears the referendum will inflame separatist tension at home.

For their part, Kurdish leaders in neighbouring Syria said the KRG referendum could bolster their cause for autonomy in negotiations with the Damascus government. Two meetings so far on the matter had gone nowhere, they told Reuters.

Turkish President Tayyip Erdogan and Russian President Vladimir Putin, who have stressed the need for Iraq's borders to remain unchanged, will meet in Ankara on Thursday.

Russia's interest in the region is growing. Oil major Rosneft is increasing investment in Kurdistan and the Kurds have been developing strong ties with Moscow.

The Russian Foreign Ministry warned Iraq and the Kurds against taking any steps that might destabilise the Middle East after the referendum.

The Kurds consider Monday's referendum to be an historic step in a generations-old quest for a state of their own.

Iraq considers the vote unconstitutional, especially as it was held not only within official KRG territory itself but also on disputed territory held by Kurds elsewhere in northern Iraq.

The United States, major European countries and nearby Turkey and Iran strongly opposed the referendum, which they described as destabilising at a time when all sides are still fighting against Daesh militants. 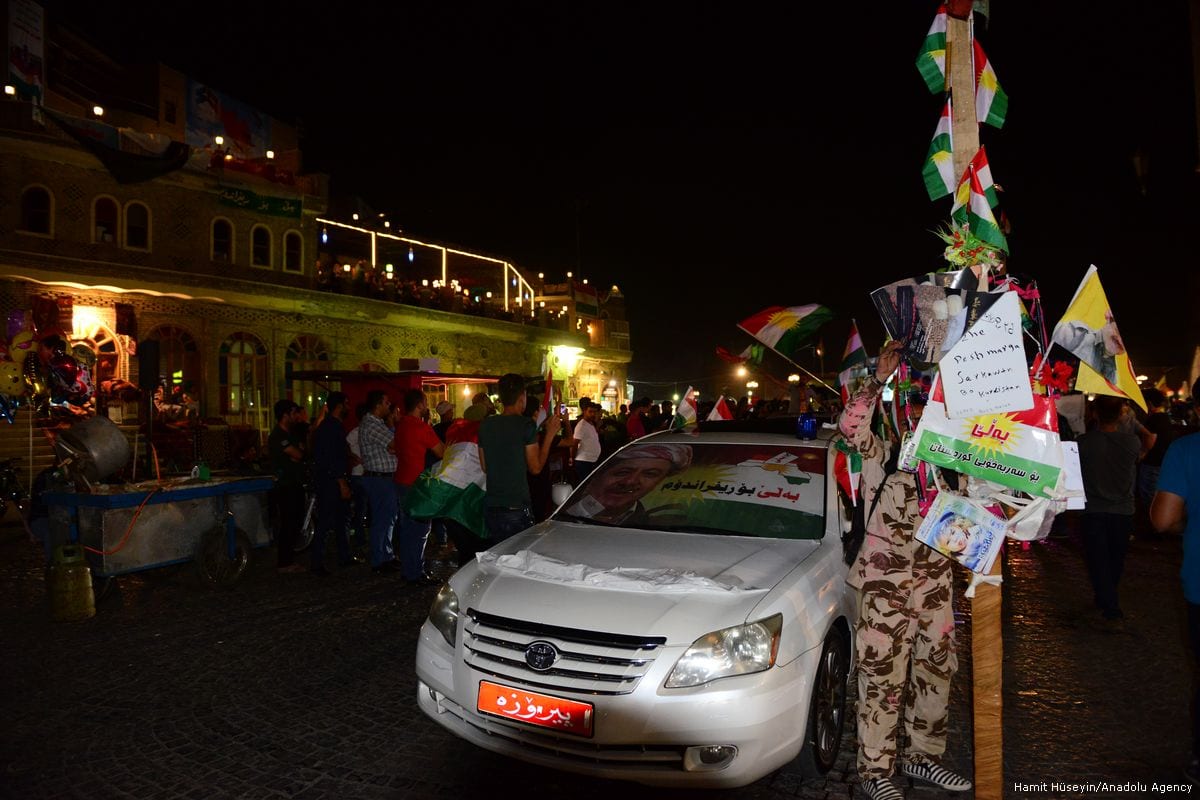 People take to the streets after the Kurdish referendum in Erbil, Iraq on 25 September 2017 [Hamit Hüseyin/Anadolu Agency]

The outcome has caused anger in Baghdad, where parliament, in a session boycotted by Kurdish lawmakers, asked Prime Minister Haider al-Abadi to send troops to the Kurdish-held region of Kirkuk to take control of its oilfields.

Kurdish Peshmerga forces took Kirkuk, a multi-ethnic region, in 2014 when the Iraqi army fled in the face of Daesh which overran about a third of Iraq. The Kurds prevented Kirkuk's huge oil resources from falling into the militants' hands.

"The government has to bring back the oilfields of Kirkuk under the control of the oil ministry," the resolution backed by parliament in Baghdad said.

The area, long claimed by the Kurds, is also home to Turkmen and Arab communities, who opposed the independence vote, although the KRG included the area in the referendum.

Barzani, who is KRG president, has said the vote is not binding, but meant to provide a mandate for negotiations with Baghdad and neighbouring countries over the peaceful secession of the region from Iraq. Baghdad has rejected talks.

Abadi, a moderate from Iraq's Shi'ite Arab majority, is under pressure to take punitive measures against the Kurds. Hardline Iranian-backed Shi'ite groups have already threatened to march on Kirkuk.

The Kurds were left without a state of their own when the Ottoman Empire crumbled a century ago. Around 30 million are scattered through northern Iraq, southeastern Turkey and parts of Syria and Iran.

The autonomous region they control in Iraq is the closest the Kurds have come in modern times to a state. It has flourished, largely remaining at peace while the rest of Iraq has been in a continuous state of civil war for 14 years.

Since the fall of Saddam Hussein, they have had to carefully balance their ambitions for full independence with the threat of a backlash from their neighbours and the reluctance of Washington to redraw borders.

In the past four years they achieved a measure of economic independence by opening a route to sell oil through pipelines to a port in Turkey. But that still leaves them at the mercy of Ankara, which draws a firm line at formal independence.

Read More: Why the Kurdish referendum means the end of Iraq

The Kurds say the referendum acknowledges their contribution in confronting Daesh after it overwhelmed the Iraqi army.

Iraq's Kurds have been close allies of the United States since Washington secured their protection from Saddam in 1991. But the United States has long encouraged the Kurds to avoid unilateral steps so as not to jeopardise the stability of Iraq or antagonise Turkey.

The US State Department said it was "deeply disappointed" by the decision to conduct the referendum, while the European Union regretted that the Kurds had failed to heed its call not to hold the vote.