Praise and protest: Reflections on how the Balfour centenary was marked 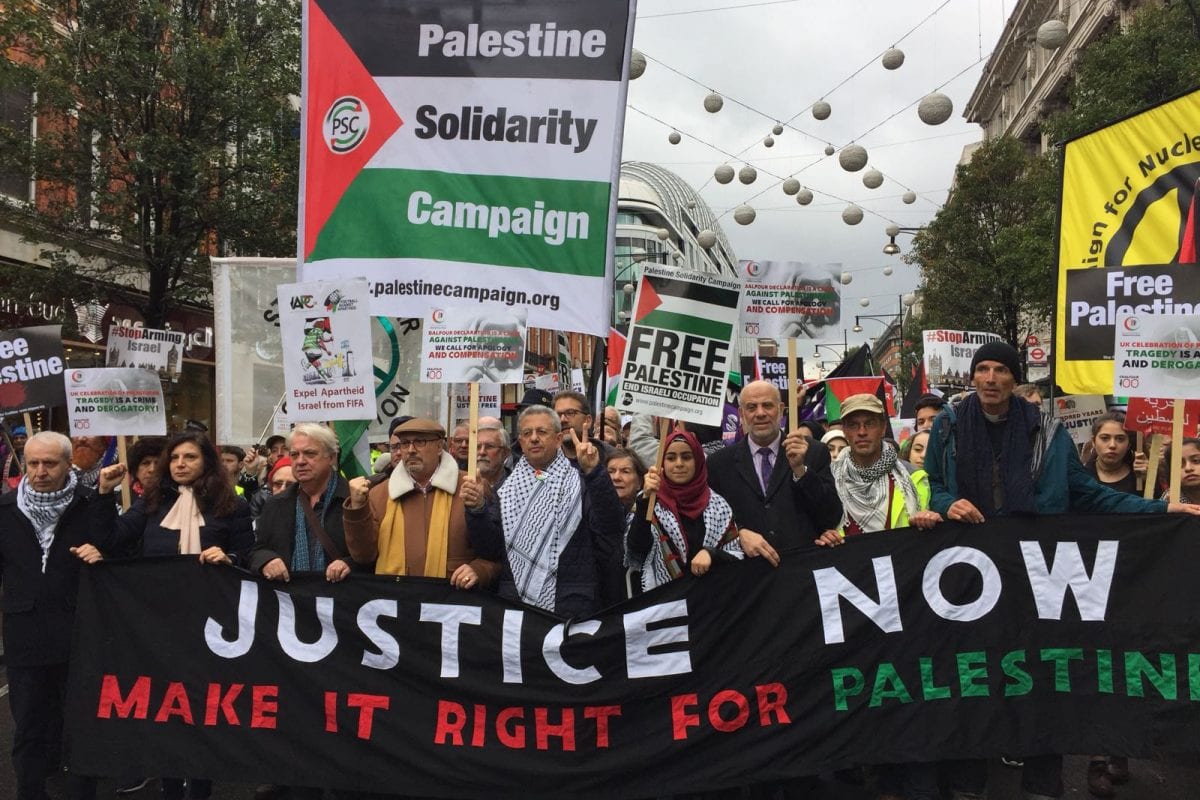 Londoners mark 100 years since Balfour Declaration in a protest to recognise the on-going oppression of Palestinians and calling for an apology from the British government, in London on 4 November 2017

Following a year of build-up, the Balfour Declaration centenary has now come and gone. After the campaigns, events, articles and protests, I want to take a moment to make a few observations about how the centenary was marked.

To my mind, there were two main aspects to the anniversary's significance.

First, it was an opportunity to examine an important historical chapter, and one that does not often get much attention – namely, the invaluable part played by the British Empire in supporting the Zionist movement and its goal of establishing a Jewish state in Palestine.

The British Empire certainly had differing, and sometimes clashing, priorities, and the Zionist movement indeed clashed with British authorities in the final years of the Mandate.

But the British occupation of Palestine lasted some 30 years, and it was during this time, thanks to the framework of the Mandate and the protection of British arms, that the Zionist movement was able to build up its own separate institutions, colonise land and prepare its militias.

Read: 100 years since the Balfour Declaration: Symbolic humiliation and the creation of tragedy

As Chaim Weizmann told Zionist activists in London in May 1917, a few months before the Balfour Declaration was formally issued, it was to be "under the wing of [Great Britain]" that they would be able "to carry out the Zionist scheme" in Palestine.

The British occupation was crucial in another way – by brutally crushing Palestinian Arab resistance to Zionist settler colonialism. For many, however, this grim record of punitive home demolitions, incarceration and executions has been forgotten, or goes neglected.

Second, and I believe that this has been key to the dynamics of both celebration and protest, the anniversary was significant because the past is not past.

Israel's colonisation of Palestinian land continues, its borders are undefined settler frontiers, Palestinian refugees remain dispossessed, and so forth. It is, as some describe it, an ongoing Nakba.

Israel, meanwhile, has not obtained the legitimacy it craves, from either the Palestinians or the wider region. You hear that anxiety in the demands to be recognised as a 'Jewish state', and it was audible in the justifications offered in recent days and weeks for the Balfour Declaration.

Read: 100 years since Balfour and foreign policy remains very much the same

For many, the centenary has been an opportunity to question current approaches to the situation, including what, if any, Britain's role should be going forward.

I believe there are two, main parts to this. First, with respect to the British government – and this goes for many other states too – there is an urgent need for Israel to be held accountable for its routine, daily, violations of international law and Palestinian human rights.

Too many governments, particularly in Europe, believe that "constructive engagement" and "private criticism" are the way to go, but this has proven completely ineffective, from settlement expansion to the conditions facing Palestinian children in military detention.

It was heartening, in this regard, to see leader of the opposition Jeremy Corbyn use the Balfour centenary to call for "increasing international pressure" on Israel: if, and when, this logic shapes government policy, it will be a game-changer.

Second, there is the bigger picture. Though one hundred years has passed since the Balfour Declaration, the document is an example of an approach that persists to this day, where Palestinian rights are subordinated to the demands of the Zionist movement (and now the State of Israel).

The Zionist movement demanded a "Jewish state" in Palestine – but there was no right to create one, which was always going to be at the expense of the country's non-Jewish inhabitants.

Unfortunately, there is still some way to go in helping politicians, policy-makers and opinion-formers understand this, though important progress has been made. Elucidating this distinction between "rights" and "demands" is a vital task going forward.

This brings us to the flaw in the rhetoric of "unfinished business", which even today's, very much Israel-supportive, British government felt comfortable using in marking the centenary.

Harnessed in support of calls for a "two-state solution", such language does not help us unpick, first, why Israel will not allow the establishment of a sovereign Palestinian state, and second, avoids the more fundamental reckoning that must take place, a hundred years later.

"To found a state in Asia and people it with a largely immigrant population drawn initially from Europe means depopulating the original territory," wrote Edward Said in 1979.

Yet, while "for the native Arab Palestinian and for the immigrant Jew who took his place, the mere fact of substitution has never really varied," he continued, "it is this fact with which the search for peace in the Middle East must begin, and with which it has not yet even begun to deal."

This, then, is some of the work that lies ahead, in parallel to insisting on practical measures of accountability for Israel's persistent, daily violations of the Palestinian people's rights.