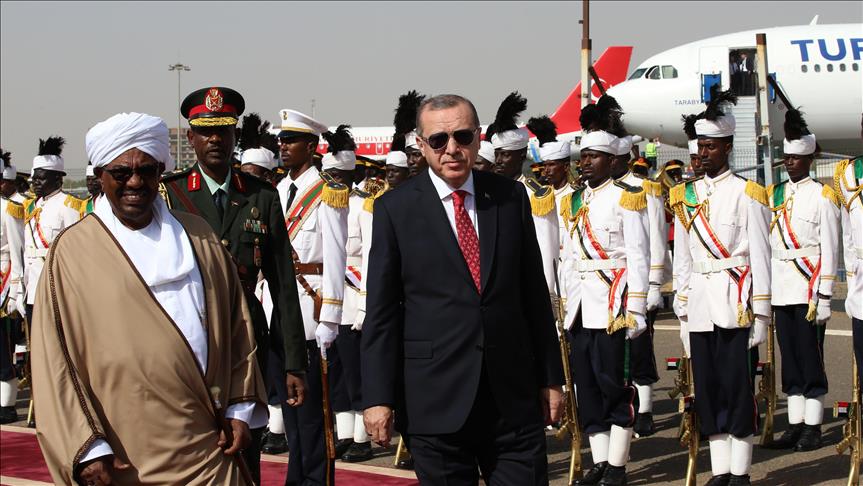 Turkish President Recep Tayyip Erdogan has arrived in Khartoum, Sudan, on Sunday for a two-day visit aimed at deepening the relations between the two countries.

Arriving in the Sudanese capital, the Turkish president kicks off a three-country regional tour. Erdogan will visit Chad and Tunisia between Tuesday and Thursday.

The visit, which is the first by a Turkish president in Sudan, will be dominated by business forums to discuss investment and the signing a number of agreements to strengthen the existing economic partnerships in the fields of agricultural production, higher education, environment, military, mining, energy, health and tourism.

During the trip, Erdogan is due to hold meetings with his Sudanese counterpart Omar Al-Bashir of Sudan, then he will address the Sudanese parliament on Sunday evening.

On Monday, the Turkish president will attend a Sudanese-Turkish business forum with Al-Bashir.

The current trade volume between Turkey and Sudan stand around $500 million, according to the Turkish Statistical Institute (TurkStat).

Turkey's exports to Sudan amounted to $328.5 million in January-October 2017, while imports from the country stood at $78.3 million.

The Turkish firms in Sudan operate in manufacturing, industry, energy, service, agriculture and machinery sectors and they help advance Sudan's economy by contributing to employment.

Erdogan's trip comes four days after the UN General Assembly's rejection of US recognition of Jerusalem as the capital of Israel.