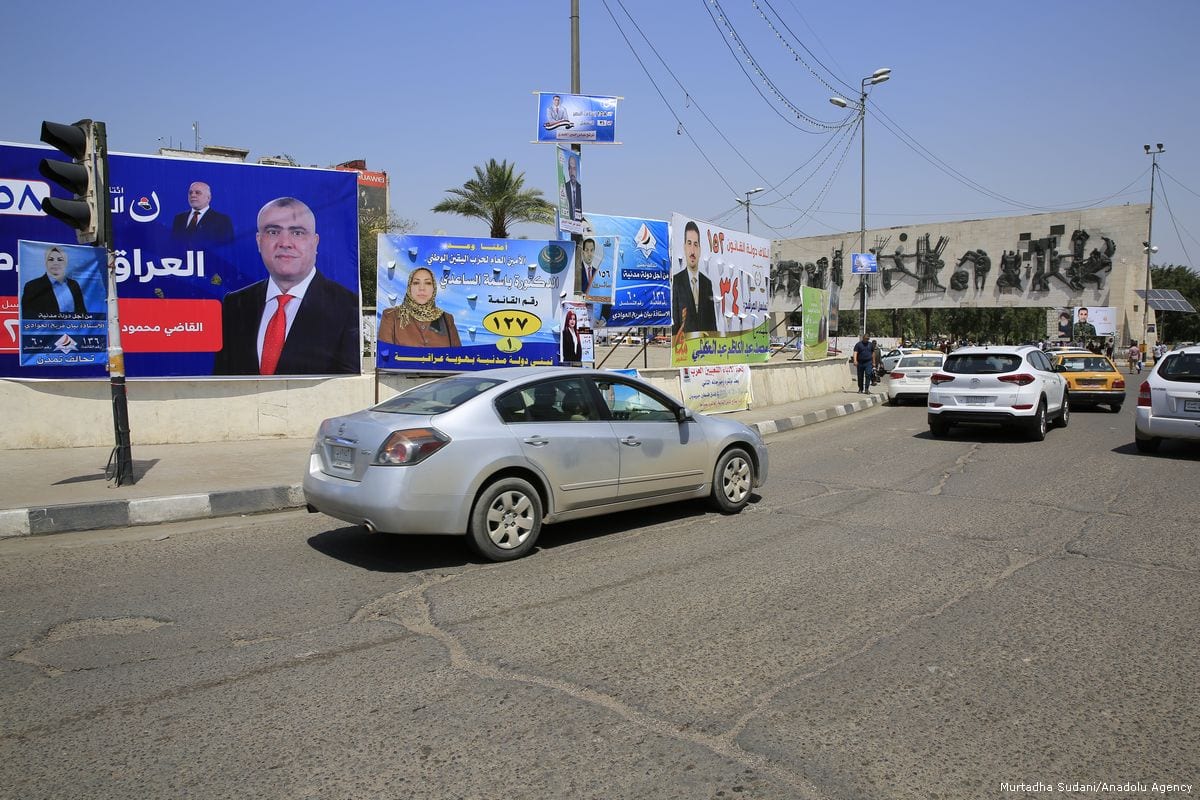 Posters of candidates are seen on billboards for the upcoming parliamentary election Baghdad, Iraq on 16 April 2018 [Murtadha Sudani/Anadolu Agency]

As Iraq's Election Day approaches, political campaign posters adorned by smiling candidates — secular and religious zealots alike — crowd the landscape. It seems that the masses do not share the political elite's merriment, though, with a growing trend of posters of defacing the billboard men. Political heavyweights stand out as the most popular targets of the latest whack-A-mole spree.

A shoe being thrown against a giant poster featuring former Premier Nouri Al-Maliki was one of the earliest but not necessarily the first such incident to go viral. Weeks before, billboard signs bearing the words "victory" and "Iraq's time" spread like wildfire, accompanied by images of Iraq's most powerful people, including Prime Minister Haider Al-Abadi and Iranian-backed Badr Corps commander Hadi Al-Ameri. Billboards basking in filth and mounds of trash while communicating messages of hope have been singled out and ridiculed.

The tearing, burning and theft of posters, Alsumaria pointed out last Tuesday has been a growing concern since the campaign began. An interior ministry official assured Alsumaria that action to curb the trend had been taken by Iraq's High Electoral Commission, one of several agencies that Maliki has infiltrated and which answer directly to him.

Candidates have lodged a total of 200 billboard-related complaints a month ahead of the scheduled elections. In spite of the countermeasures adopted, the ferocity of poster mutilation has not been tamed, suggesting that the time for damage control may have passed.

Read: Iraq and the fight against corruption

Citizens have been busy toppling billboards, stealing frames, cutting out the faces of candidates or tearing away their mouths. The heads of others have been removed, suggestive of decapitation. In other cases, names and slogans were redacted and some posters were even set ablaze. The fancier mobile billboard advertising offers the protection that traditional billboards lack, as the vans displaying the adverts can be spirited away for safekeeping.

"We should burn the electoral posters of all these cowards and opportunists," Facebook user Laith Al-Shommari told AFP, angered by such insulting behaviour which negates the sacrifices of PMU fighters.

Having lost their appetite for real change, defacement is being used by members of a disenfranchised society for settling scores. The symbolic victories they achieve represent, in the eyes of some, self-compensation in the absence of true justice. "Same faces, almost, that already occupy parliamentary seats," one man told Al-Araby TV.

In this context, the power of political persuasion driven by provocative promises has lost its prominence. The same message was delivered by singer Seyyed Baha' Al-Husayni in a newly released song called Menreedkum ("We don't want you"): "These parties must go. Pharaoh's portrait has to come down. Let them hear, let them hear, we cannot be tricked."

An unnamed official quoted by Alsumaria dismissed claims of an organised defacement plot conducted by rival candidates. "This is society's reaction to unattended promises," he said.

Attacks on the portrait gallery that the streets of Iraq have become, express the desire for change. Anger over what political failure is costing civilians was another prompt for attacks against physical spaces monopolised by Iraq's billboard men.

"People are tired," a Baghdadi resident told MEMO, "and are no longer interested in dialogue after 15 years of not being listened to."

Incumbent PM Abadi describes his "Victory Alliance" as cross-sectarian. He is standing against his predecessor Maliki, populist leader Moqtada Al-Sadr and his allied communist running partners, and a long list that forms Iraq's militia alliance, Al-Fatah, consisting of an estimated 20 PMU-aligned groups.

The finances needed to run their political billboard ads has received no mention in either Arabic or English language media. Such a revelation, perhaps, would reveal external sources of revenue used to purchase political relevance.

"Printing costs are $10 per square metre," explained analyst Ahmed Al-Mahmoud from the Foreign Relations Bureau of Iraq (FRB-I), a London-based opposition group. "That's for flex face material produced in Iran. Material from Turkey costs around $15. The cost of advertising is a little more complex, and depends on the support frame needed."

The market, he says, is controlled by Iraqi MPs, "each of whom monopolises an area." He gave the example of Sadrist MP Hakim Zamili. "Anyone doing any printing is fully accustomed to the rules," he added, "and knows which political office to pay."

An estimated 7,000 candidates are running in the poll slated for 15 May, forming 30 to 50 electoral alliances. The winning bloc must secure a minimum of 165 out of 328 parliamentary seats to form the next government.

The Iraqi public is less optimistic than in previous election cycles. They are venting their frustrations on the smiling faces of Iraq's billboard men.