Iranian President Hassan Rouhani yesterday threatened US President Donald Trump with "serious consequences" if he withdrew from the nuclear deal signed between Tehran and the P5+1 countries.

"I tell those in the White House that if they do not live up to their commitments, the Iranian government will respond firmly," Rouhani said in a televised address.

"If anyone betrays the deal, they should know that they will face severe consequences," Iran's Fars news agency reported Rouhani as saying.

Meanwhile, the Secretary of Iran's Supreme National Security Council, Ali Shamkhani, said yesterday that Iran may withdraw from the nuclear deal if Trump cancels it. 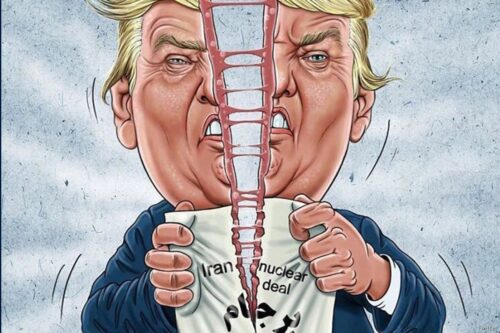 Shamkhani told reporters in Tehran that Iran's Atomic Energy Organisation is ready for some "sudden moves" if the nuclear deal is cancelled.

Trump announced last month during a meeting with Israeli Prime Minister Benjamin Netanyahu that Washington will withdraw from the nuclear deal if France, Germany and Britain did not agree to substantive changes to it.

Rouhani's remarks came hours before talks between Trump and his French counterpart Emmanuel Macron on several issues, mainly the nuclear deal with Iran.

German Chancellor Angela Merkel is expected to discuss the issue with Trump on Friday.