Chomsky and the dishonesty of the two-state 'solution' in Palestine 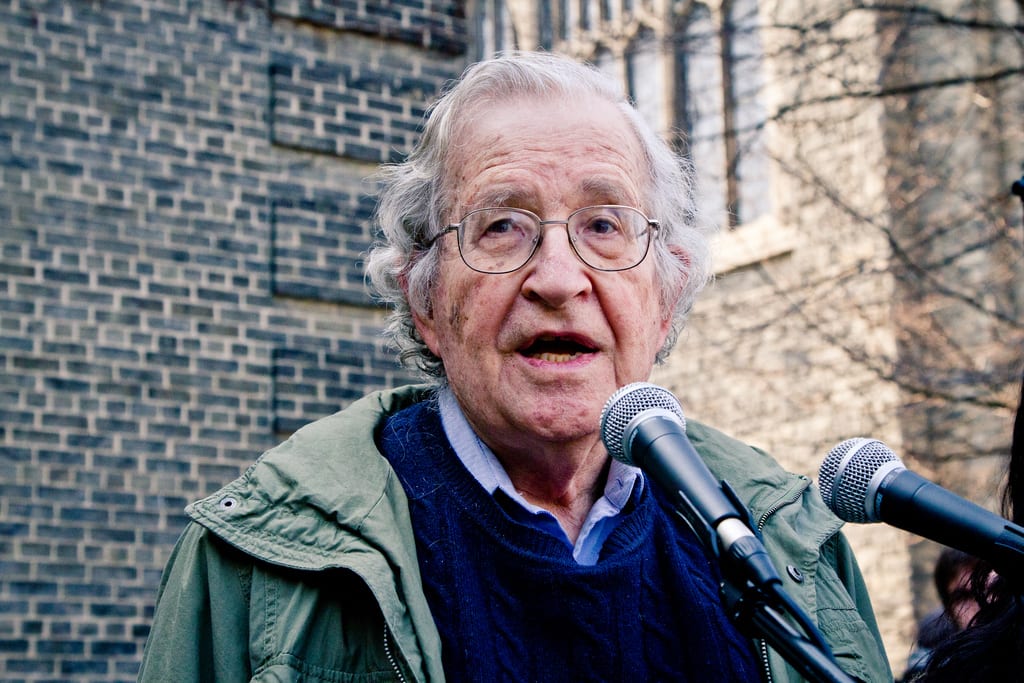 I first visited Palestine at the end of 2004. As well as being much younger then, my views were quite different in some respects to what they are today.

Then in my mid-twenties, and still something of a minor activist in the anti-war movement, a lot of my thinking on Palestine was influenced by Noam Chomsky, the dissident American political thinker and academic. Now nearing his nineties, Chomsky is someone whose work as a writer and public intellectual has had an immense influence on two to three generations of the Anglophone left. His searing criticism of the record of US imperialism; his constant questioning of official narratives; his intellectual rigour; and his belief in the capacity of human nature to do good have been in many ways invaluable tools.

In just one example of his debunking of dominant media narratives, Chomsky recently told Democracy Now! that the level of interference in the US democratic system of which Russia is accused pales into insignificance when considered against what Israel does, despite the current media hysteria about Moscow and US elections. He is entirely correct about that.

Chomsky is usually very good at diagnosing the illnesses inherent in US-led global capitalism – war, class inequality, racism and censorship, among others — but, in my view, he has often failed to prescribe a correct cure for these problems. He often makes the point, for example, that although he was long renowned as an opponent of America's war of aggression in Vietnam – which ended up killing more than 3 million Vietnamese – he was always against resistance to the draft in the US. Personally, I would argue that popular resistance to the draft was one of the main things that helped to bring that genocidal war to a close.

This sometimes poor strategic judgement also explains in part his past hostility to the Boycott, Divestment and Sanctions (BDS) movement, although his position has veered back and forth between opposition (particularly of the boycott of Israeli academic institutions) to qualified support for some aspects of this Palestinian-led movement for justice, equality, freedom and the right of return.

This takes me back to my opening anecdote about my 25-year-old self. In those days, although I definitely considered myself part of the radical left, and as such was sceptical of the entire concept of nation states (if not an anarchist, I was certainly a "fellow traveller"), mainly due to Chomsky's influence, I was broadly supportive of the so-called "two-state solution".

In all of Chomsky's (voluminous) work on Palestine (or "Israel and the Palestinians"), his prescription for what is to be done has not really changed for decades. He supports the idea of the state of Israel alongside a Palestinian state in the West Bank and Gaza Strip; the aforementioned misleadingly named "two-state solution".

In Chomsky's account – as also in the work of his acolyte Norman Finkelstein – reaching this "settlement" of the "conflict" would be relatively simple. "The entire world" supposedly supports this "solution", apart from Israel and its patron in Washington DC, that is.

By "the entire world", Chomsky and Finkelstein really mean "the entire world's governments" although even that is not really correct. The other settler-colonial states, such as Australia and Canada, are often very supportive of Israel in the UN, as are Britain and other former colonial powers in Europe. The EU's role is to provide typically toothless criticism of Israeli war crimes in the West Bank, while giving Israel a green light to carry on. States which were once colonised, though, are often vociferous in their opposition to Israel's modern settler-colonialism.

Right from the first time I visited Jerusalem and the rest of that remaining part of Palestine commonly known as the West Bank, I started to feel uneasy. I felt that I had been misled by the Chomskyesque image of an easily separated Palestinian "East Jerusalem" from an Israeli "West Jerusalem", and a Palestinian people who would be happy with the West Bank and Gaza alone, despite it being a mere 22 per cent of their historic homeland.

All it takes to see that the "two states" concept is unsustainable is to go from Ramallah to Jerusalem. Do that and you will see that the supposedly simple "solution" of the separation of the two peoples is an illusion.

On the ground, it is rarely clear where "East Jerusalem" ends and where "West Jerusalem" begins. I remember walking around with the copiously detailed maps printed by the UN's Office for the Coordination of Humanitarian Affairs trying to figure it out.

There are entire suburbs of Jerusalem which look exactly like the rest of "Israeli" Jerusalem but which are in fact illegal settlements built on stolen land in Palestinian "East Jerusalem". And that is even before you get into the entrenched reality of the other illegal West Bank settlements, or the more central issue of the Palestinian refugees' legitimate right to return to their land.

On that first visit, it was very clear to me that this was all permanent, and was very much meant to be so. The idea that re-partition into two states was the "pragmatic solution" began to crash against the hard reality of what my friend, the author and academic Ben White, correctly calls "the one-state reality".

In fact, there is already a unitary state between the River Jordan and the Mediterranean Sea, but it is an apartheid state controlled by Israel's brutal colonial regime. The only question is, will this state remain a radical, racist regime, lacking even the most basic democratic rights for Palestinians, as it is right now? Or will Palestinians ultimately be successful in their decades-long struggle for equality, freedom and the return of the refugees? This is the true question to be asked about the future of Palestine.

In 2009, after I read the seminal book One State by Ali Abunimah (now my colleague at The Electronic Intifada), I became a supporter of a democratic state in Palestine. This once supposedly radical idea is now gaining more and more support from Palestinians themselves, from people around the world, and even from a brave minority of Israeli dissidents.

The main problem with Chomsky's prescription for the re-division of the land of Palestine into a "Jewish state" and an "Arab state" (as was proposed by the UN Partition Plan in 1947, when it was a massive failure) has always been that it is totally unrealistic. More than anything else, it ignores the wishes of the Palestinians who are, after all, the indigenous people. If there is one issue that the entire Palestinian body politic agrees on more than any other, it is the right of return.

I came across the reality of this in the West Bank, especially when visiting refugee camps. You see the popular symbols, in street art, monuments and graffiti all pointing to one thing: the Return.

Handala, for example, the iconic Palestinian refugee child created by cartoonist Naji Al-Ali; and the symbol of the Popular Front for the Liberation of Palestine, signifying return of the refugees. More than any other return symbol, you cannot miss the keys that many refugees used to lock the doors of their homes during the ethnic cleansing process; they have always been the emblematic symbol of the Palestinian struggle.

Palestinians and their mothers, fathers, grandparents and great-grandparents, who were driven out from their homeland of Palestine – now called "Israel" by the racist occupation endeavour which stole their country and wiped it off the map – will never agree to abrogating the right of return in any kind of "settlement". For all the good that he has done in other areas, this is something that Noam Chomsky is radically wrong about. The "two-state solution" which he advocates, is inherently dishonest.