Nestled among the boutiques and cafes of London's Mayfair, the newly launched Stories Art Gallery offers art lovers, old and new, the opportunity to explore the work of contemporary Syrian artists. As Syria's civil war drags on towards its eighth year, curator Manas Ghanem decided to present a different side of her home country than the images shown in the media.

"Most of the artwork that we have here comes from artists who lived in Syria during the war, so that's what makes this artwork more unique and interesting," she says of the 20 odd pieces on display. Ranging from portraits to abstract paintings, drawings to watercolours, each artwork has a story, which Manas and gallery manager Natalja Vasina include in every tour they give.

"I like to visit all these exhibitions that celebrate Syrian art, but for the past seven years I kind of saw one colour, which was not fair. So, we and a group of friends teamed together to choose art that spoke a different message, gave an individual story to the human being through art – this is a language that everyone understands."

One of the first pieces seen upon entering the gallery is a canvas by Hammoud Chantout depicting the last supper of Jesus with his disciples. Painted in shades of black and grey, the piece still manages to emit light with gold accents around the heads of the figures and the table giving it a surreal glow. Chantout, an Aleppo native whose work has been sold at Christie's auction house, has also contributed several other pieces to the gallery as part of a project to capture the essence of a mud wall common to traditional Syrian houses. Textured with varying shades of brown, one piece depicts his grandfather's house, highlighting the Arab practice of future generations building levels on top of the original home to make space for growing families. In capturing his grandfather's wall, Chantout subtly stresses the relevance of the space as a base for an entire family name.

Another series of paintings by Damascene artist Boutros Al-Maari exhibits a notably different style. Almost cartoonish, each image depicts a Syrian couple in traditional dress spending time together; from flying a kite to a man giving his lover a rose, they emphasise that despite the ongoing struggles, love and hope for the future are emotions that still have a place in the lives of Syrians, humanising their experiences. 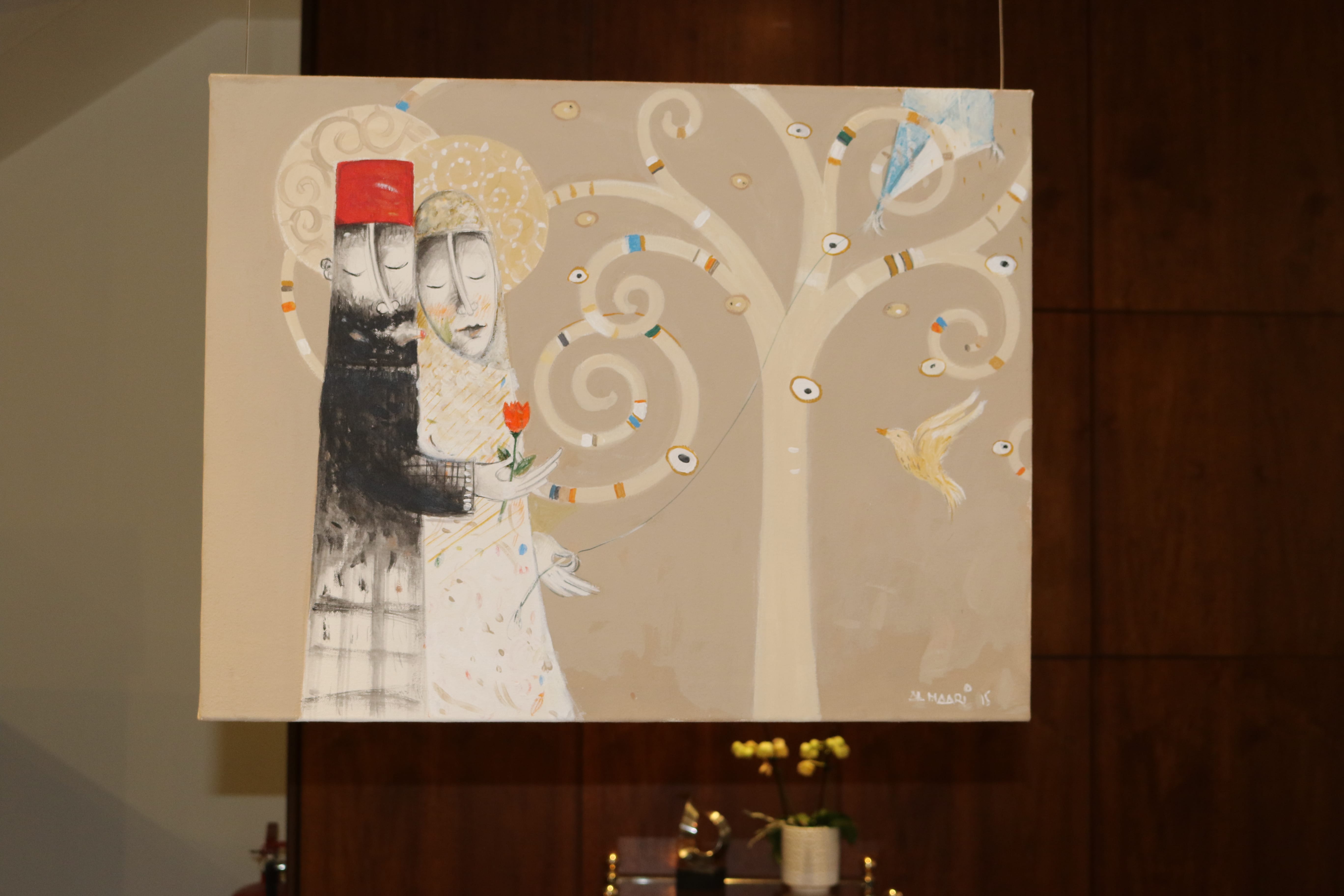 "The stories behind the paintings are all stories of resilience, of life loving individuals, we wanted that to also be seen and celebrated," says Manas.

Yet some of the works on display also reflect the traumatic experiences which the artists have suffered. Jomaa Nazhan was living in his hometown of Deir Ez-Zor when Daesh took control of the city in 2014. In his work, the brutal treatment of residents by the militants, as well as the ongoing battle for the area with the international coalition is depicted. A dark collage combining drawings and paintwork, the aura of the city during this time is depicted on paper, with leaning buildings and figures reflecting the pain and pressure inflicted by Daesh rule.

It is an image that persuaded Natalja to come on board when she was first introduced to the work by Manas.

"Manas was trying to persuade me for a few months to try and help and come on board with the project. We were walking with her to the framing shop … when she unwrapped them, I, a person who is not into art, had tears in my eyes and had goose bumps, because that is the first painting that touched my soul. I still have goose bumps when I talk about those particular pieces." 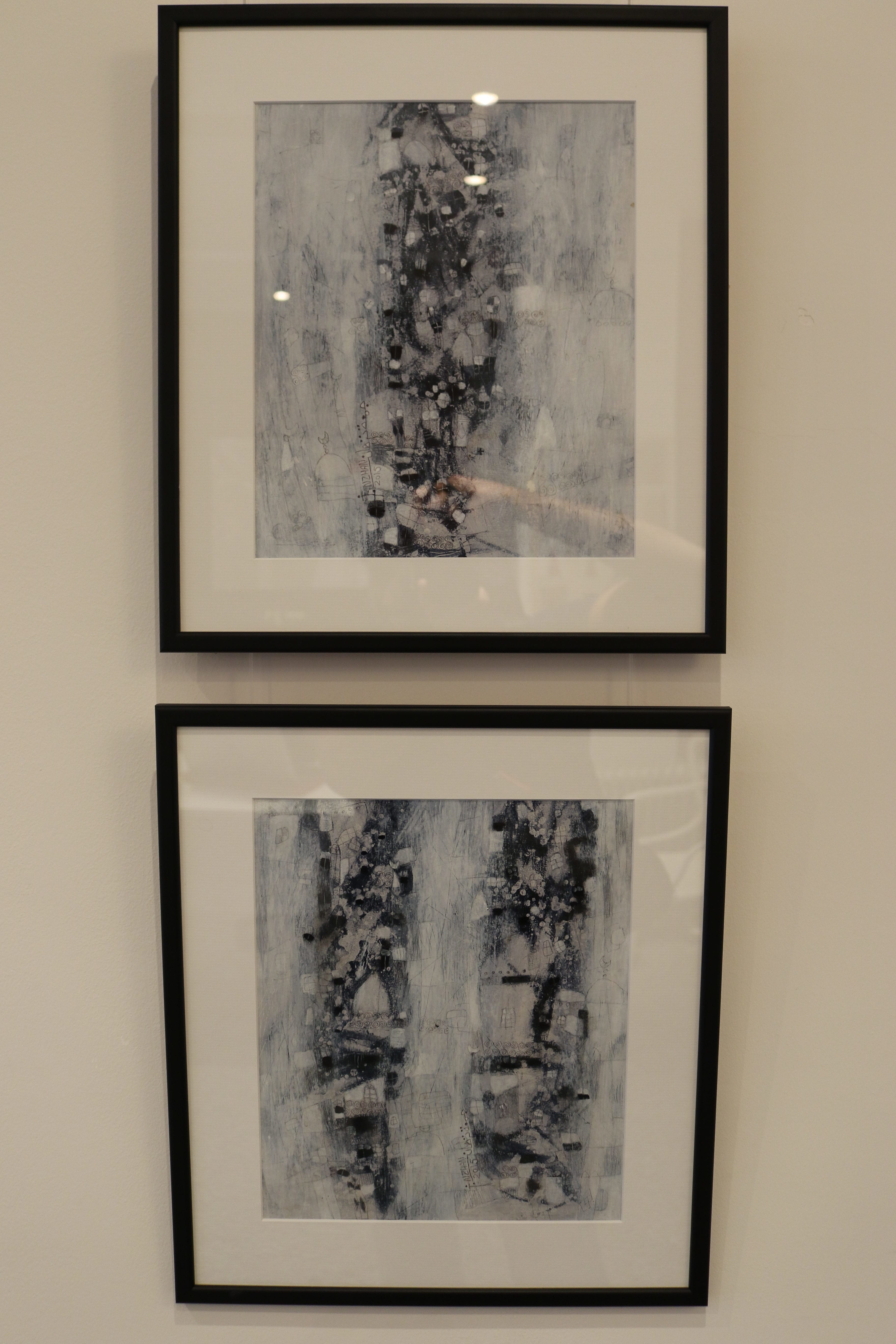 With the work hailing from artists now living around the world, some still in Syria, the logistics of organising the exhibition were tough at first for Manas.

"In the beginning we only got pictures and we celebrated that in Greece; we had two exhibitions that were very successful. They were very well received and we were very proud of them. We then had the idea of bringing this artwork to London where art is greatly celebrated and the audience will be of different opinions," she explains.

"We managed to gather momentum to get original art pieces. We managed to get pieces from Beirut because the art scene in Beirut also celebrates Syrian art … We also got artwork from artists who are Syrian but live in Berlin, live in Hamburg, live in Sweden."

With the universal language of art, the works on display at the gallery are a way for Syrians to address an audience who they cannot otherwise speak to. But for Manas, it's also a way to present a history of Syria often unexplored in the West.

"When you say Syrian art, people are actually surprised, although the Syrian art scene has been vivid since the 50s and the 60s and many of the Syrian artists, those that we are celebrating here, have been known internationally and have exhibited in many European countries before, including Paris, Rome, Vienna."

"Yet for the past eight years, it's as if that has just gone, and all that you hear about Syria is different. So we are trying to bring it back.

Even through there is a state of war, a state of pain, Syria is still a nation that contributes to international heritage.

Yet for Manas, the exhibition is in some ways bittersweet, given that most people will only have heard of Syria as a result of the ongoing war.

"Syria is famous because of the wrong reasons now," she muses. "When I studied in America when people were asking me where am I from and I would say Syria, they were saying 'Oh you mean Sierra Leone?' Now, they know exactly, every little village, the name, the location, because of the war, the atrocities, the migration and the problems."

"But these difficulties of seven years in the 7,000 years of civilisation cannot define a nation."

As a Syrian and as a humanitarian, I would love for the name of Syria to not be linked with blood, terrorism, war and refugees. I want it to be linked as it deserves: with kindness, with creativity, with generosity, with colours and very nice food.

The exhibition, that has been open for a month, has already been well received. Stories Art Gallery has hosted three receptions so far, and invited academics and businesspeople from various backgrounds.

"All of them were inspired and happy to see this different colour of Syria being presented in London. They wanted to hear more and wanted to know about our future events," Manas says. "We are hoping to have a new exhibition of four frontline Syrian artists, hopefully in the beginning of December."

It has also proved popular among the public, although there has been an element of surprise, with the majority being exposed to Syria's art scene for the first time.

"Especially because some of the pieces were done during the war, they ask 'Did they still create during the war?' and we said 'Yes they do, and they create beautiful pieces'," says Natalja.

With stories of Syrian refugees continuing to dominate the headlines, Manas appreciates the unique insight artwork gives into the lives and experiences of the artists.

"When you see art, because it is a very civil way of communication, you feel respect. You don't feel the pity that you feel or the overwhelming sadness that comes to you when you watch the news and you see an image of a starving child or rubble," she explains.

"Honestly it was very tiring emotionally to only see one image always when it comes to Syria, and it's repeated – again its Yemen now. It's always in the news. So I'm thinking now maybe our next project will be with Yemeni artists to see the bigger picture rather than focusing on just one narrow thing. "

However for Manas, the objective of her gallery is not political. It's to celebrate beauty and creativity that shows its face, even in the darkest times: "Art doesn't have to be understood, it has to be loved," she concludes.

If you are interested in visiting Stories Art Gallery, you can find out more on their website.