Media hypocrisy puts pressure on Arabs but not Israeli activists 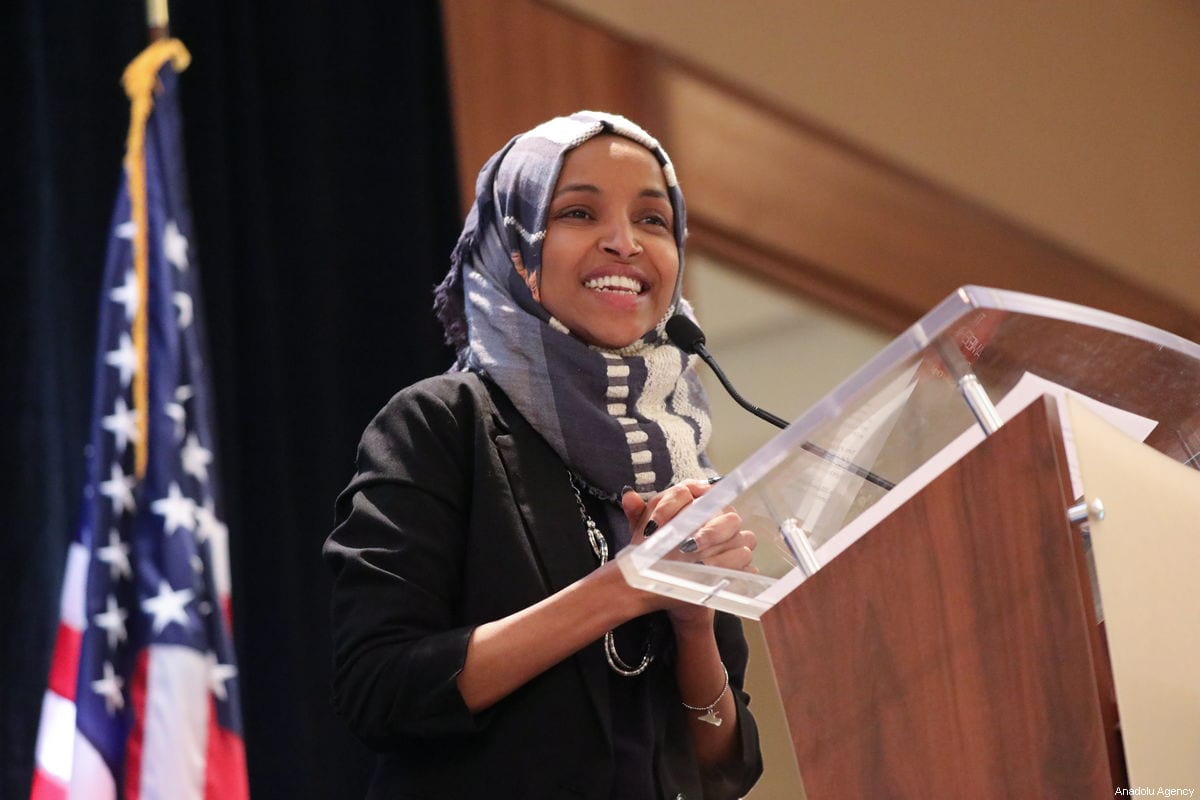 US congresswoman Ilhan Omar of Minnesota delivers a speech in Washington, US on 10 January 2019 [Safvan Allahverdi/Anadolu Agency ]

During the height of the 2012 Israeli war against the Palestinians in the Gaza Strip, Ilhan Omar published a tweet that read, "Israel has hypnotized the world, may Allah awaken the people and help them see the evil doings of Israel. #Gaza #Palestine #Israel"

Omar's comment reflected the anger many Arabs and Muslims around the world felt towards the government of Israel, which had intentionally started that conflict by killing dozens of Palestinian activists including Hamas leader Ahmed Jabari.

Israel launched a barrage of more than 1,500 high powered missiles (all donated by American taxpayers) and killed more than 293 Palestinians during the week-long fighting before a ceasefire was called by both sides.

But back then, Omar, a Muslim immigrant from Somalia, was only an employee of the Minnesota Department of Health and none of Israel's big guns bothered with her.

READ: 2018 was another year of BDS victories

After completing a year long investigation into the 2012 conflict, the Israeli Human Rights groups B'Tselem challenged Israel's assertions that it had surgically targeted militants and avoided injuring non-combatant civilians, proving it had attacked anything that moved during the weeklong assault.

Today, however, Omar is the Congresswoman for Minnesota filling the seat previously held by Muslim American Congressman Keith Ellison and she holds a lot of power. She is one of two Muslim women elected to Congress, the other being Michigan's Rashida Tlaib. Tlaib and Omar have raised public awareness of Israel's military attacks and oppression of Palestinians both in Gaza and in the West Bank and that is causing Israel some PR grief.

So pro-Israel columnists with dual loyalties including writers and editors at powerful newspapers like the New York Times have condemned Omar, claiming her criticism of Israel's actions are "offensive" to "Jewish Americans".

Let's be honest, all criticism of Israel is described as "offensive" to "Jewish Americans" by the legions of Israeli apologists working with dual loyalty in the American news media. But their attacks go far beyond normal discourse and are intended to bully, intimidate and demonise in the hopes of silencing those powerful human rights voices of justice for Palestinians.

Bari Weiss, a long time pro-Israel activist who started writing for the Jewish American media and now has a throne at the New York Times Op-Ed pages, slammed Omar in a 1,348-word column that invoked Nazism, the Holocaust, and anti-Semitism in vilifying Omar. Weiss also dragged Omar through the long and tortuous debate over the crucifixion of Jesus by the Biblical Jews, which many Jews find offensive and denounce as a "blood libel".

READ: US civil rights activist denied award due to support for BDS

In past columns, Weiss has denounced BDS as a "thinly veiled form of bigotry" and compared the BDS movement to the Nazi hatred of Jews. In the column she defends Lara Alqasem, a former BDS leader detained in Israel for weeks last year, as someone who should be allowed into the Jewish state so she can see the "truth" about Israel's "democracy". 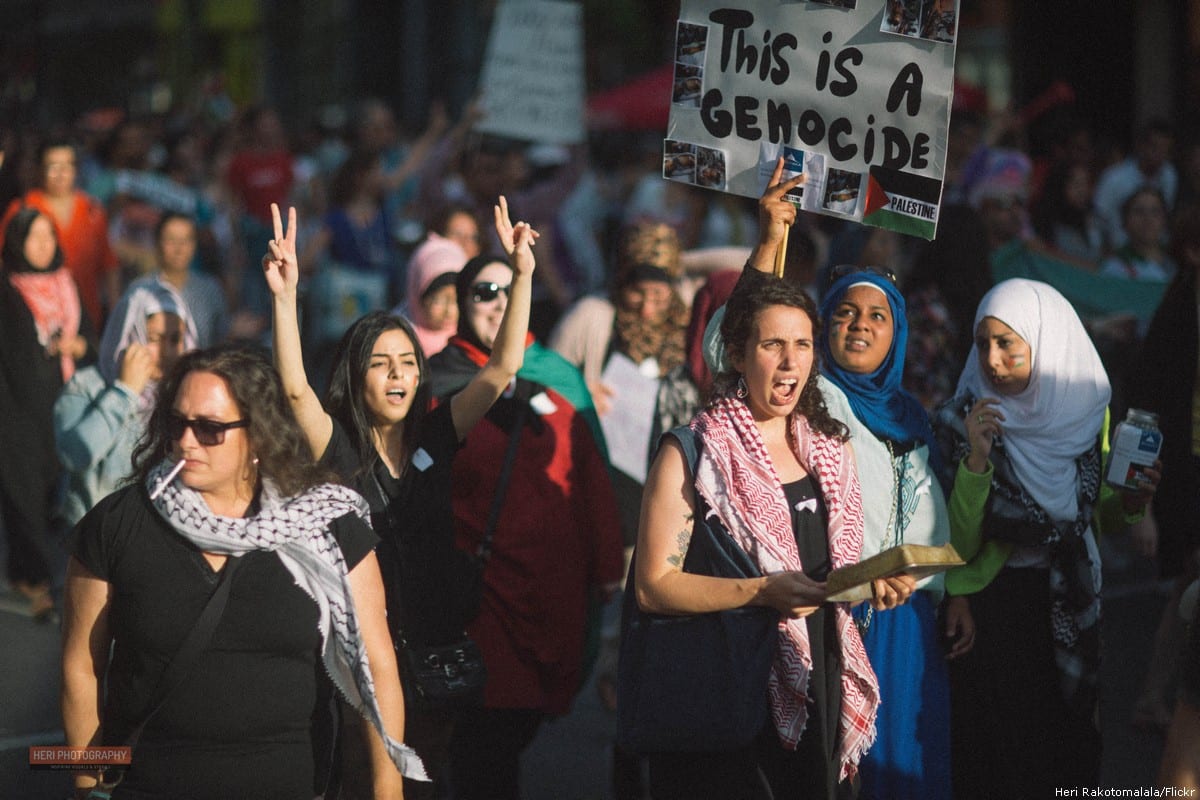 Israel violates the rights of Palestinians every day and pro-Israel propagandists like Weiss can't defend Israel's abusive conduct, so they avoid it by turning the debate instead to an attack against Israel's critics using the "Nazi defence".

Israel uses the war crime strategy of "extra judicial killing" to murder Palestinian activists in the West Bank to avoid habeas corpus, but the victims are the "Nazis".

Weiss isn't the only one to resort to the Nazi analogy to brutalise human rights principles when they apply to Palestinian victims. Attorney Alan Dershowitz is another pro-Israel apologist who doesn't mind trampling the truth in order to denounce Israel's critics.

This week in the Hill, an online news and opinion website, Dershowitz attacked Michelle Alexander, an esteemed African-American civil rights writer at the New York Times who used the anniversary of civil rights leader Rev. Dr. Martin Luther King Jr., to urge Americans to stand up for human rights everywhere, including in Palestine.

Dershowitz makes all kinds of ridiculous unsubstantiated assertions including that homes destroyed by Israel belong to terrorists, but never mentions that alleged terrorists are killed without trial and that family members who did not engage in the alleged violence are also living in the destroyed homes. It's called "collective punishment", which is considered an international war crime under Article 33 of the Fourth Geneva Conventions. As a lawyer, Dershowitz should know that, but conveniently tosses out things like international law when defending Israel's atrocities.

Alexander has come under assault from a barrage of pro-Israel writers and activists including by David Harris of the Arab-bashing American Jewish Committee (AJC) calling the esteemed civil rights activist's writing "flawed and polemical". She was also attacked by Bari Weiss, her New York Times colleague who writes Op-Eds far more frequently in the newspaper than Alexander.

Unlike pro-Israel writers who never apologise or clarify their writings, Omar was pressured into issuing a "walk back" in which she said she apologised for using the word "hypnotized" because, as her critics complained, holds an "ugly sentiment".

Yea sure. The idea that Israel's government has a far greater influence on American foreign policy and has most of the US Congress in a political headlock through millions of dollars in campaign contributions from pro-Israel PACs like AIPAC is so unfathomable!

The mainstream American news media is so biased in America when it comes to issues of Palestine and the Middle East, and never addresses that bias.

Pro-Israel writers and activists are given almost unlimited opportunities to write Op-Eds defending Israel and those columns are rarely challenged.

When a rare column defending Palestinian rights somehow makes it past the pro-Israel sentinels and ends up in the Op-Ed pages of a major newspaper like the New York Times, right away, the columns are countered by pro-Israel columns.

The assault on Omar, Alexander and others won't stop because the Israelis can't afford to allow mainstream writers and elected officials challenge and expose their lies or Israel's lies.

But Israel's lies need to be exposed at every opportunity. And instead of issuing even watered down apologies, Omar should double down and respond with the plethora of evidence that Israel is engaged in racist Apartheid policies that undermine the civil and human rights of Palestinians purely because they are not Jewish.