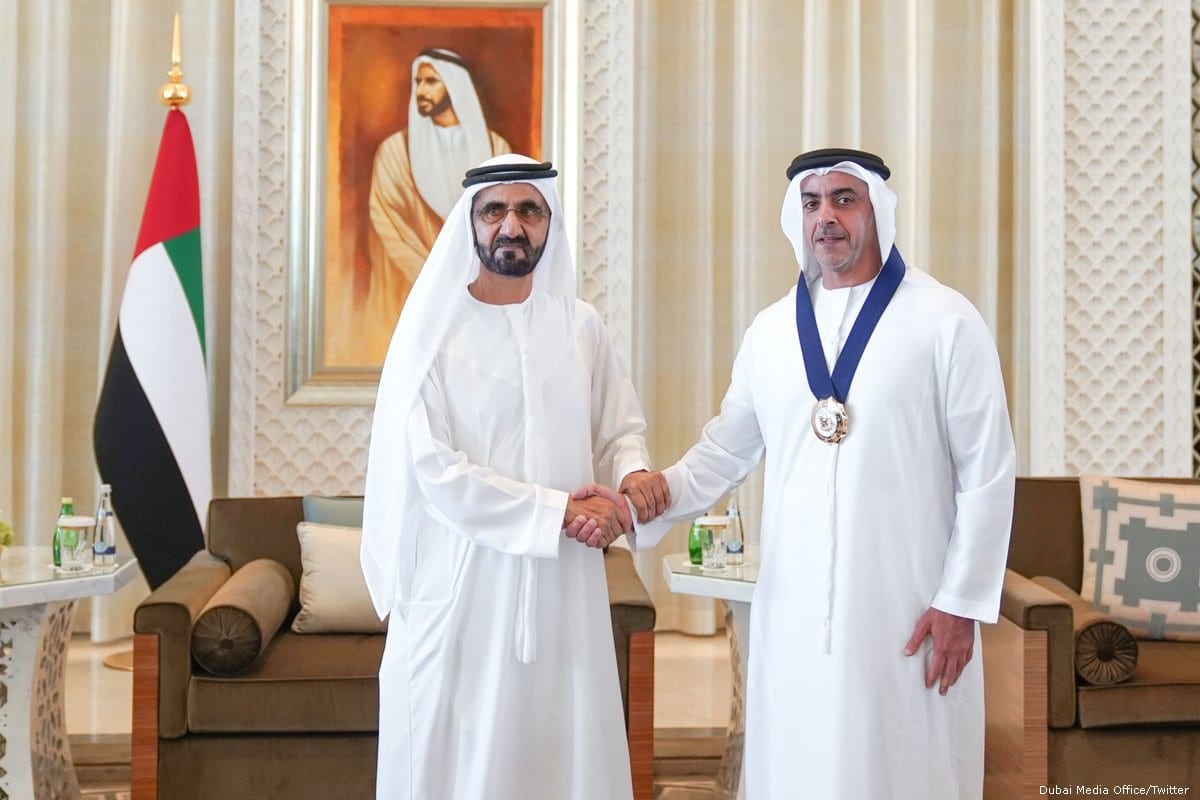 UAE Prime Minister and Emir of Dubai Sheikh Mohammed bin Rashid Al Maktoum (L) with one of the winners of the Gender Balance Index 2018 [Dubai Media Office/Twitter]
January 29, 2019 at 4:09 am

The United Arab Emirates (UAE) is being widely ridiculed after it emerged that the four prize winners for an initiative designed to foster gender equality in the workplace were all men.

. @HHShkMohd: We are proud of the success of Emirati women and their role is central to shaping the future of the country. Gender balance has become a pillar in our governmental institutions. #UAE pic.twitter.com/zKPkn9nTMd

Dubai's media office proudly shared photos of the ceremony on social media only to be met with ridicule and laughter.

The glaring omission became the source of an avalanche of mocking tweets. "There's something about all these winners of the UAE's "Gender Balance" Awards. I just can't put my finger on it," joked one twitter follower ridiculing UAE authorities for the obvious contradiction.

There's something about all these winners of the UAE's "Gender Balance" Awards. I just can't put my finger on it… https://t.co/L2z1iTqJZJ

With no women to be seen at the award on gender equality another incredulous twitter user was unable to hide their astonishment: "Something seems off here, but I'm not quite sure what, exactly".

Something seems off here but I'm not quite sure what, exactly 🧐https://t.co/LocqKeLSb7 pic.twitter.com/ObmEyn6eSI

Another pointed to the glaring irony that seemed to have been lost amongst UAE officials. "UAE show the world just how woke they are by awarding all four gender equality awards to men."

UAE show the world just how woke they are by awarding all 4 gender equality awards to men 👏🏽🙄👏🏽https://t.co/vQPv4l4mMU pic.twitter.com/OyiDoIVHxe

Some simply said: "I don't know if I should laugh or cry."

I don't know if I should laugh or cry #UAE #genderequality #Equalityhttps://t.co/DpHymyELyR

Others were more direct in their denunciation of the Gulf state, which is known to invest millions of dollars across the world to portray a polished image: "You can't make this shit up – UAE's gender equality awards won entirely by men."

Officials in Dubai, however, seemed oblivious to the apparent contradiction in celebrating what appears to be nothing more than self-promotion. Perhaps the country's media office expected applause after gloating that "gender balance has become a pillar in our government institutions." Unsurprisingly what they received instead was a barrage of mocking denunciation.