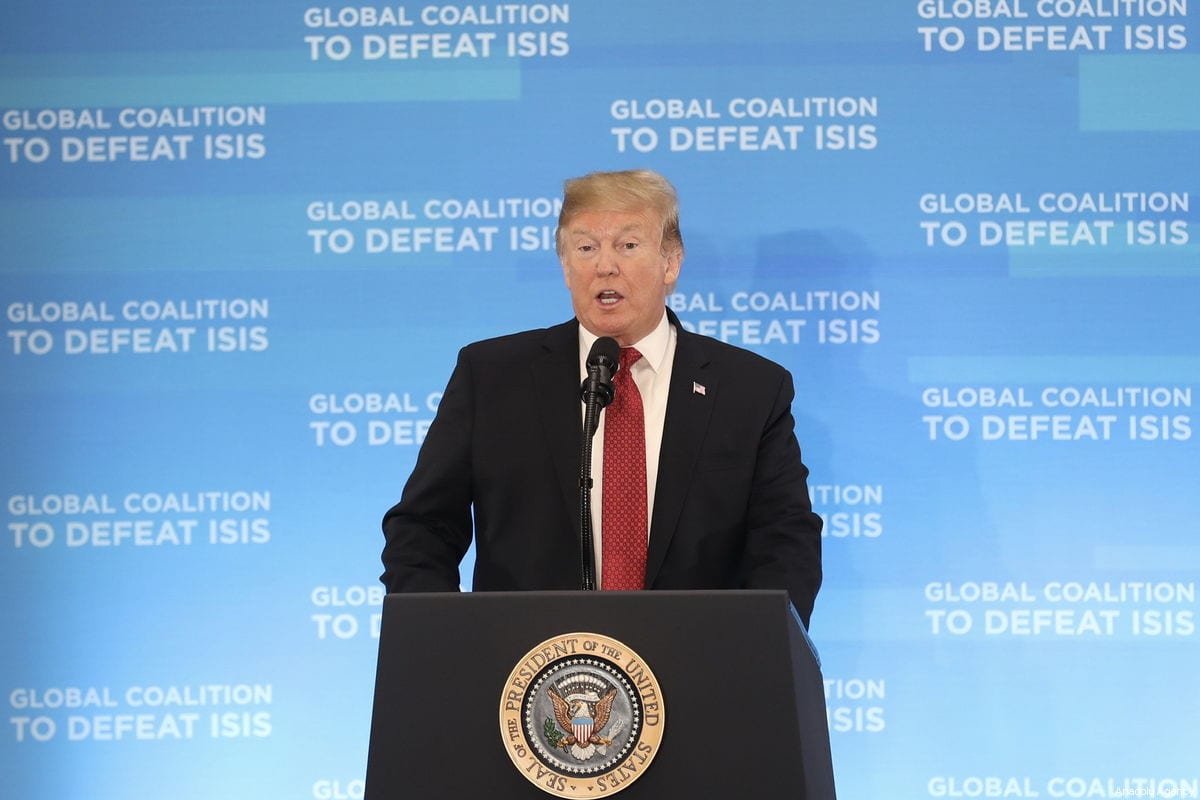 US President Donald Trump makes a speech during the meeting of the Ministers of the Global Coalition to Defeat Daesh, at the State Department in Washington, United States on 6 February 2019 [Mustafa Kamacı/Anadolu Agency]
March 15, 2019 at 6:45 pm

In the latest effort by lawmakers to shed light on the potential deal, Democratic Senator Bob Menendez and Republican Senator Marco Rubio asked the Government Accountability Office, or GAO, to investigate the talks as soon as possible. They also asked the GAO to review executive branch negotiations with Saudi Arabia on nuclear energy since 2009, when Democrat Barack Obama was president.

Rubio and Menendez, members of the Senate Foreign Relations Committee, want to ensure any agreement "includes rigorous nonproliferation safeguards and other conditions to prevent nuclear cooperation with Saudi Arabia from undermining or threatening regional or international security," said their letter to the GAO, a copy of which was seen by Reuters.

Saudi Arabia, which is seeking to build at least two nuclear power plants, has been in talks with the United States for years on importing technology.

The OPEC member, which is also in talks with countries including Russia, China and France, has at times resisted US standards on sharing nuclear technology that prevent uranium enrichment and spent fuel repossessing.

Both of those techniques are potential paths to clandestinely making fissile material for nuclear weapons.

Concerns in Congress rose last year after Saudi Crown Prince Mohammed bin Salman told CBS News his kingdom would develop nuclear weapons if archrival Iran did. The killing of journalist and US resident Jamal Khashoggi in a Saudi consulate in Istanbul last year has also sparked backlash against any deal.

READ: After the Senate vote, will Trump intervene to back his reckless ally in Saudi?

US Energy Secretary Rick Perry has had quiet talks with Saudi officials, including his friend, Energy Minister Khalid al-Falih, on nuclear power.

The Department of Energy and the National Security Council did not immediately respond to requests for comment.

The senators said the negotiations are occurring in a "very opaque manner" and that the Trump administration is not keeping their committee informed.

Perry has said he told Saudi Arabia it is important for the kingdom to be seen around the world as strong on nonproliferation. He also said that part of the talks center on making sure any nuclear inspections would not be intrusive for sensitive areas in the kingdom.

Perry told the Financial Times this week that talks with Saudi Arabia were at a pace "closer to one mile an hour than to Mach 1.2."

Last month, Democratic House members alleged in a report that top White House aides ignored warnings they could be breaking the law as they worked with former U.S. officials in a group called IP3 International to advance a multibillion-dollar plan to build nuclear reactors in the Middle East, including Saudi Arabia.