Hamas' weapons are the focus of Israel and the region's targets 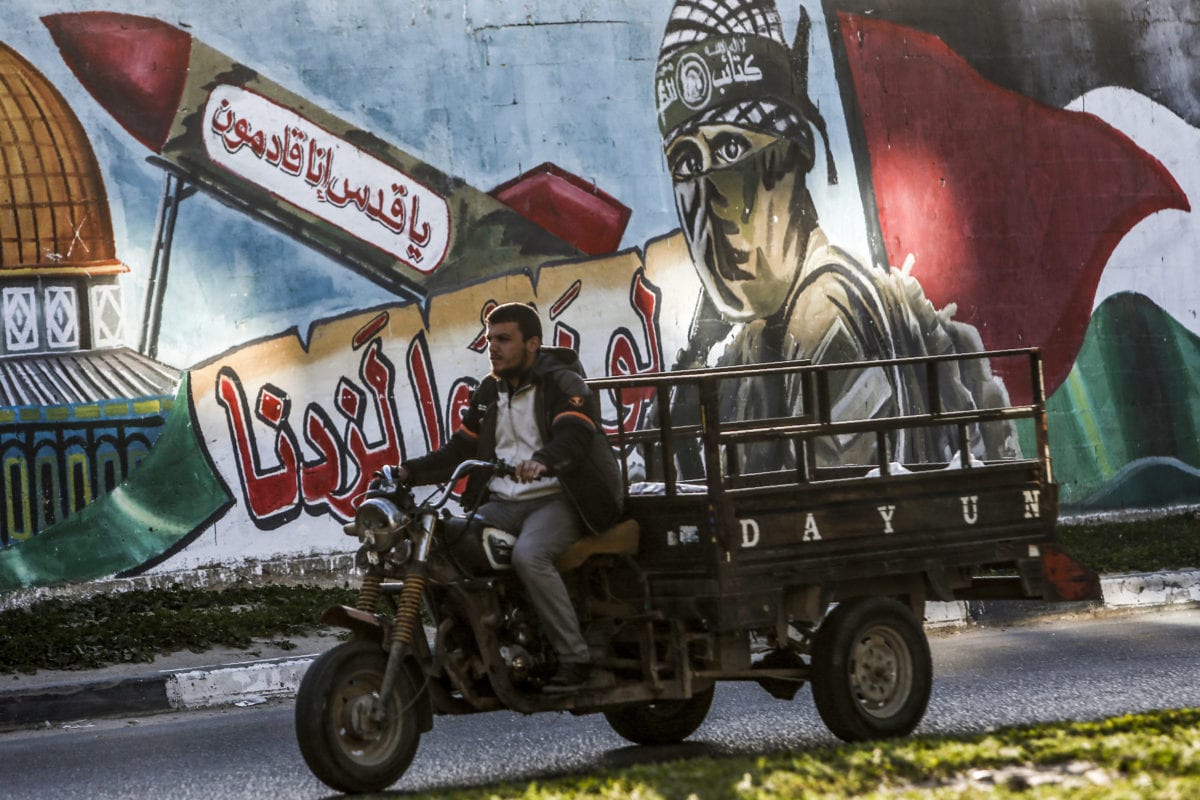 A Palestinian man drives a motorcycle cart past a mural depicting a masked fighter of the Qassam Brigades, the armed wing of the Hamas movement, next to a missile with a caption reading in Arabic "Oh Jerusalem, we are coming" and the Dome of the Rock, in a street in Rafah in the southern Gaza Strip on 14 March, 2019 [SAID KHATIB/AFP/Getty]
Dr Adnan Abu Amer
AdnanAbuAmer74
April 3, 2019 at 1:00 am

In coincidence with the latest round of military escalation between Hamas and Israel in Gaza after the rocket attacks on Tel Aviv, twice within ten days in the middle and end of March, Israel's talk about the future of Hamas' weapons and the extent of the danger posed by its remainder in Hamas' hands has increased. Israel has also discussed the potential of imposing international control over these weapons after having demanded in the past that they are eliminated and confiscated from Hamas.

In the following lines, I will discuss the increase in reports about Hamas' heavy weapons, the size of the weapons in terms of quantity and quality and the extent to which Hamas would accept UN control or rocket disarmament in exchange for a long-term truce with Israel. These reports also discuss the alternatives for Hamas if it does not hand over its weapons, as well as if pressuring Hamas would generate new convictions to accept this, even though organisational mobilisation within the movement is considered more important than anything else.

This Israeli campaign against Hamas' weapons began with the call by the Israel Defence magazine, which is closely affiliated with the Israeli Ministry of Defence, to subject Hamas rockets to international monitoring following the repeated bombing of Tel Aviv from Gaza. The magazine also demanded that Hamas' rockets be monitored by Russia or the UN, similar to what has occurred with neighbouring countries in the region in the past.

Meanwhile, the Associated Press published a lengthy report following the recent military confrontation in Gaza, which said that Israeli efforts against Hamas' intentions to acquire more weapons did not work, as the movement obtained a significant array of weapons including Qassam rockets, homemade R-160 rockets, Iranian Fajr-5 missiles, drones and mortars. Hamas also built offensive tunnels. The rocket fired from Gaza on 25 March was one of Hamas' most potent rockets, with a range of 120 kilometres.

Over more than a decade, Hamas has built a huge arsenal of rockets and missiles, which began with short-range missiles, and now it possesses rockets capable of striking anywhere in Israel. This is after the movement acquired a variety of advanced, accurate and effective weapons, including anti-tank and anti-aircraft missiles, which are shoulder-fired missiles produced by Russia, along with some drones.

Israel Hayom newspaper, which is closely associated with Prime Minister Benjamin Netanyahu, revealed the Egyptian-Israeli arrangements to launch a plan aimed at disarming Gaza in exchange for completely lifting the siege as part of the second phase of the truce with Gaza. The plan is based on the removal of all types of heavy weapons from Gaza, except cold weapons, which will be subject to extreme monitoring and control.

According to the proposed plan, internal affairs will remain in the hands of the Palestinian organisations headed by Hamas, or a unified political entity that includes all parties. As for the weapons remaining in Gaza and allowed to be used by the internal security forces, they will be cold weapons, limited in number and will be subject to strict control.

The newspaper claimed that security officials in the US are familiar with the details of the plan prepared by Egyptian and Israeli teams. This plan will be revealed after the Israeli elections, with the participation of other Arab countries such as Qatar, Saudi Arabia, Jordan and the UAE.

Amid this Israeli talk about the need to disarm Hamas, a poll conducted by the Palestinian Centre for Policy and Survey Research in the West Bank indicated that 71 per cent of Palestinians supports Al-Qassam Brigades' stay in Gaza, alongside the PA official security forces. This suggests that a large number of Palestinians support these weapons remaining in the hands of the military factions.

It is worth mentioning that these Israeli plans targeting Hamas' weapons coincide with the Egyptian public efforts to dry up Hamas' weapons sources through the demolition and destruction of all the border tunnels between Gaza and Sinai, especially since the phrase used by arms deals and Palestinian factions to describe the tunnels is "oxygen tube" to smuggle weapons.

Perhaps the significance of these tunnels is highlighted by the fact that the last war in Gaza, taking place in the summer of 2014, did not end until Egypt vowed to Israel that it would make great efforts to stop the smuggling of weapons via the tunnels, out of fear of Hamas' growing strength and its preparation for the next round.

After the destruction of the tunnels, it appears that Hamas and the other Palestinian factions have resorted to the use of the Mediterranean Sea, as the Gaza Strip has a sea coast of more than 40 kilometres, to smuggle some weapons. Israel has claimed several times that it has intercepted ships loaded with weapons and ammunition on its war to Gaza. Israel also claimed that not a day goes by without attempts being made to smuggle weapons in Gaza. While the military sources in Gaza have not confirmed or denied the use of the sea to smuggle arms as an alternative to the tunnels, it did say that it has the right to equip itself with qualitative weapons to confront the Israeli threats against it.

The Israeli Ministry of Defence claims that rockets and other weapons are smuggled into Gaza in special containers left by boats at sea, coming from Egyptian and Lebanese ports, by speedboats, or by placing barrels in the sea at a specific distance from the coast. These locations are in line with accurate and precise measures of the water and air currents, which bring the barrels to the shore of Gaza. It is very difficult to stop these operations because Israel cannot monitor every centimetre of the shore in search of small canisters.

Israeli navy boats are also hunting down Palestinian fishers due to suspicions that they are cooperating in the process of smuggling weapons, which has not been proven in any of the arrests of fishers in recent months. However, the Israeli army said that Hamas was carrying out maintenance work for the destroyed tunnels and building new tunnels because there are no alternative options for delivering weapons to Gaza.

Read: Hamas calls on Brazil to backtrack on opening trade office in Jerusalem

Israel has spoken through many military spokespeople and generals about Hamas' intentions to obtain Chinese-made C-704 missiles, anti-ship missiles with a range of 35 kilometres, and missile-guided radar systems that would change the military situation in Gaza and disrupt the military balance between both parties. This is because it would target ships sailing in the area and Israeli gas facilities.

Al-Qassam Brigades, the military wing of Hamas, organised military demonstrations in Gaza City, during which they presented SAM-7 anti-aircraft missiles in a move that would change the rules of any new confrontation with Israel. This is the first time Hamas has exposed this type of weapon. Moreover, Palestinians in Gaza occasionally hear ongoing sounds of explosions in various areas, later revealed to be military exercises and rocket tests by Hamas military operatives to confirm the accuracy of their weapons and equipment, especially rockets and improvised explosive devices.

Perhaps the biggest shortage of weapons inside Gaza due to the demolition of tunnels is evident through a review of the most important weapons used by Hamas in the previous confrontation with Israel, the most important of which is the Grad rocket smuggled from abroad, which is an improved Katyusha rocket with a range of 40 kilometres. Other weapons used by Hamas in the past are the Iranian-made Fajr missile, which has a 75 kilometres range, Hamas-made M75 rocket, mortar shells, anti-tank bombs, explosive belts, 150-metre hand grenades, RPGs, light machine guns and anti-aircraft guns.

The current and future logistical stage for the resistance factions in Gaza, specifically Hamas, is focused on the development and manufacture of weapons and the development of the combat mentioned above equipment after the destruction of the tunnels.  Hamas and its military partners in Gaza are seeking to make up for the great shortage of weapons by innovating alternative means of efficiency. It has managed to make great leaps in this regard, in terms of bombs, explosive devices, and missiles. It has also obtained anti-aircraft and anti-tank weapons, as well as explosive devices and bells that are capable of hindering Israeli ground advancement in any expected confrontation.

Since the end of the last war in Gaza in 2014, Hamas has taken precautions to store large quantities of weapons, so that if there is another attack, it can withstand and fight, depending on the means and equipment available. It has succeeded in preparing and storing large quantities of them.

Israel has issued a warning recently regarding the intensive efforts of Hamas' so-called "scientific department" which has managed to produce special rocket-propelled grenades with ignitable head, which can be used to set fire to Israeli areas. Hamas has been concerned for some time with Israeli military, naval, and city targets, but has not succeeded yet in implementing its plan because the naval forces succeeded in thwarting the work of Palestinian swimmers as well as barrels and boats carrying explosives.

Israel is also making another effort with the US using a memorandum of understanding related to combatting arms smuggling to Hamas. A group of Western countries was created to carry out intelligence work, thwart the smuggling of weapons by sea to Gaza and confiscate arms shipments by sea. However, there are many smuggling routes, and a large number of means of weapons were smuggled by sea, making arms suppliers increasingly use the sea routes. Weapons are shipped via international shipping companies and European ports, involving the extensive use of fake companies and false documents.

While Israel has been secretive regarding the routes used to smuggle arms to Hamas in Gaza, it has claimed that a considerable number of the smuggled weapons come from far away, and wonders how they even reach Sinai despite the vast distance, let along Gaza, as the distance exceeds 2,000 kilometres.

While aerial activity in the area is under the control of the Israeli Air Force, it has not concealed its fears of new smuggling routes to Gaza being opened in the sky. As soon as Israel deals with one breach, it faces another, along with new ships, emerging fake companies, and improvised routes, new and new clients. It is an endless intelligence war that requires the use of the international military, political, and intelligence pressure on smuggling routes in the region to Hamas in Gaza.