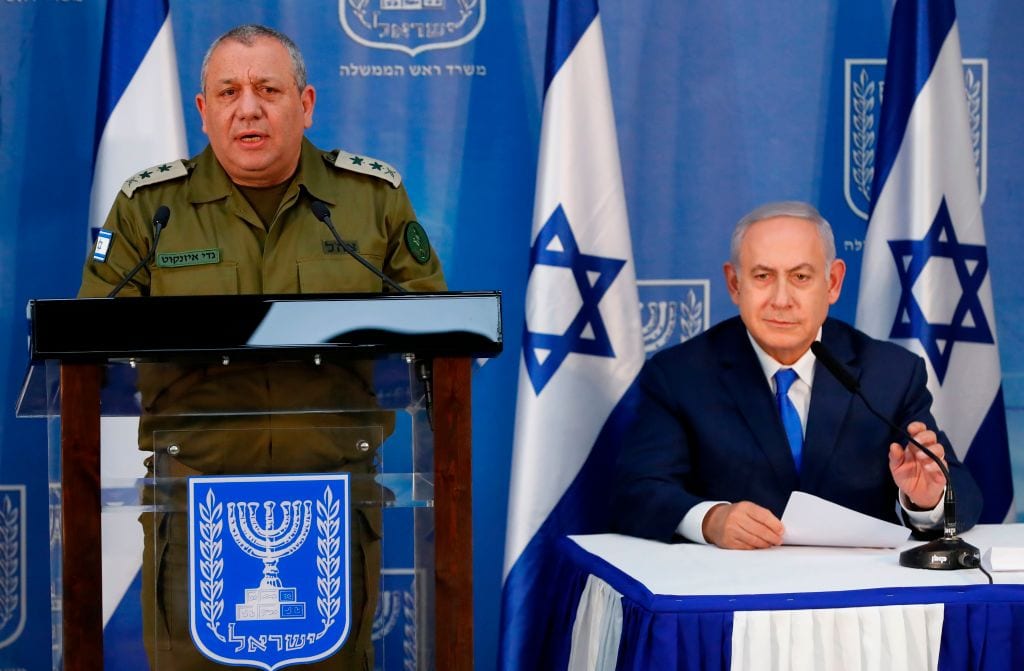 Israeli Prime Minister Benjamin Netanyahu and Israeli Chief of Staff Gadi Eizenkot (L) give a press conference in Tel Aviv, on 4 December 2018 [JACK GUEZ/AFP/Getty Images]
May 16, 2019 at 11:10 am

Former Israeli military chief Gadi Eizenkot has stressed the importance from Israel's point of view of the "security coordination" with the Palestinian Authority (PA), declaring that it prevents daily confrontations between Palestinians and Israeli occupation forces.

Speaking for the first time since leaving his post earlier this year after four years in charge, Eizenkot told an audience in Washington D.C. that Israeli forces and the PA work together on a daily basis.

"Without the coordination it will be a lot of friction," Eizenkot said, adding that Palestinian President Mahmoud Abbas "understands what will be the situation without coordination and cooperation".

"It's a Palestinian interest and an Israeli interest," Eizenkot said.

"We want to allow them a better life, and to maintain the coordination between the IDF [Israel army] and the Palestinian forces. It's a common interest."

Eizenkot explained that when the Israeli military learns of "threats" emanating from Palestinian cities in the occupied West Bank, "we try to share the information with them [the PA]", but that "if we recognise a ticking bomb, we send our own troops".

"So without coordination, there will be clashes every day, in several places. It's very important".

Eizenkot was speaking at the Washington Institute for Near East Policy, where he is now a visiting fellow. This was his first public appearance since retiring.

According to reports of his remarks, the former military chief said that in the absence of a comprehensive plan to resolve disagreements between Israelis and Palestinians", in the short-term "we need…to strengthen the coordination between the military and the Palestinian apparatus".