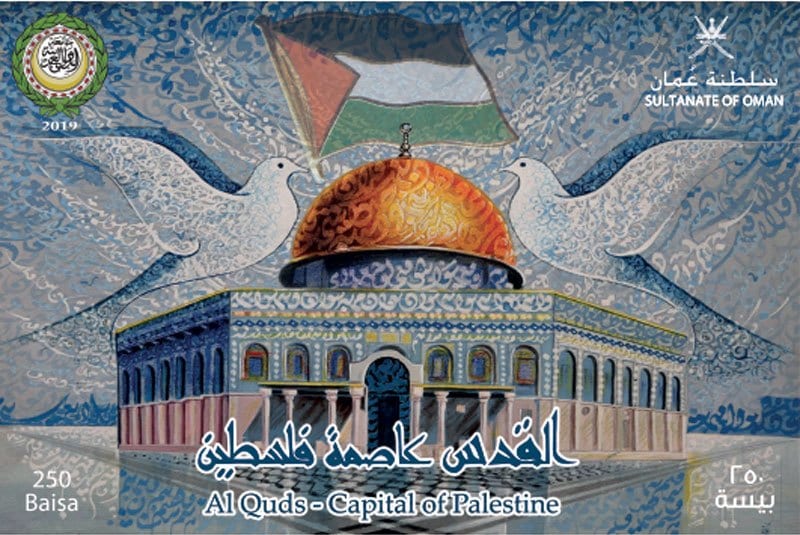 Oman is honouring Palestine and its capital Jerusalem by issuing commemorative stamps that read "Al Quds – the Capital of Palestine" as part of a collaboration with the Arab Permanent Postal Commission.

The initiative was established by the Arab League in 1954 to represents the Arab world's support for the Palestinian cause.

The stamps launched by Oman Post yesterday feature an image of the Dome of the Rock Mosque which sits in the Al-Aqsa Mosque compound in Jerusalem and the flag of Palestine, along with a white dove symbolising peace.

Abdulmalik Al Balushi, CEO of Oman Post, said: "Oman has always been a supporter of the Palestinian cause, and this new stamp not only very beautifully depicts the Dome of the Rock, but also delivers a united message to the entire world."

"We hope that philatelists and people who are interested in the historical and cultural significance of Al Quds, will enjoy the stamp and be reminded of our wish for a better future for the Palestinian people and peace around the world."

This show of solidarity comes two weeks after US President Donald Trump unveiled his so-called "peace plan" to end the Palestine-Israel conflict. Dubbed the "deal of the century" it has been slammed for giving Israel everything it wants while providing Palestinians no rights, ensuring that they are forever subjugated by the occupation.

The Arab League has rejected Trump's plan, but some Arab countries, such as the United Arab Emirates (UAE), have already given their support. Moreover, the ambassadors of the UAE, Bahrain and Oman were at the White House during the launch of the plan.

Khalid Bin Hilal Al Mawali, Omani speaker and chairman of Majlis Al Shura (advisory council), delivered a speech during the 30th emergency meeting of the Arab Inter-Parliamentary Union in which he pointed to Oman's stance and support to the Palestinian cause and the establishment of their own independent state.

Al Malawi also pointed to the "peace plan", supported by Israel, to be an unacceptable deal as long as it does not consider Jerusalem as the capital of Palestine, the return of refugees and establishment of an independent State of Palestine.

READ: Speaker of Kuwaiti Parliament throws 'Deal of the Century' in the bin