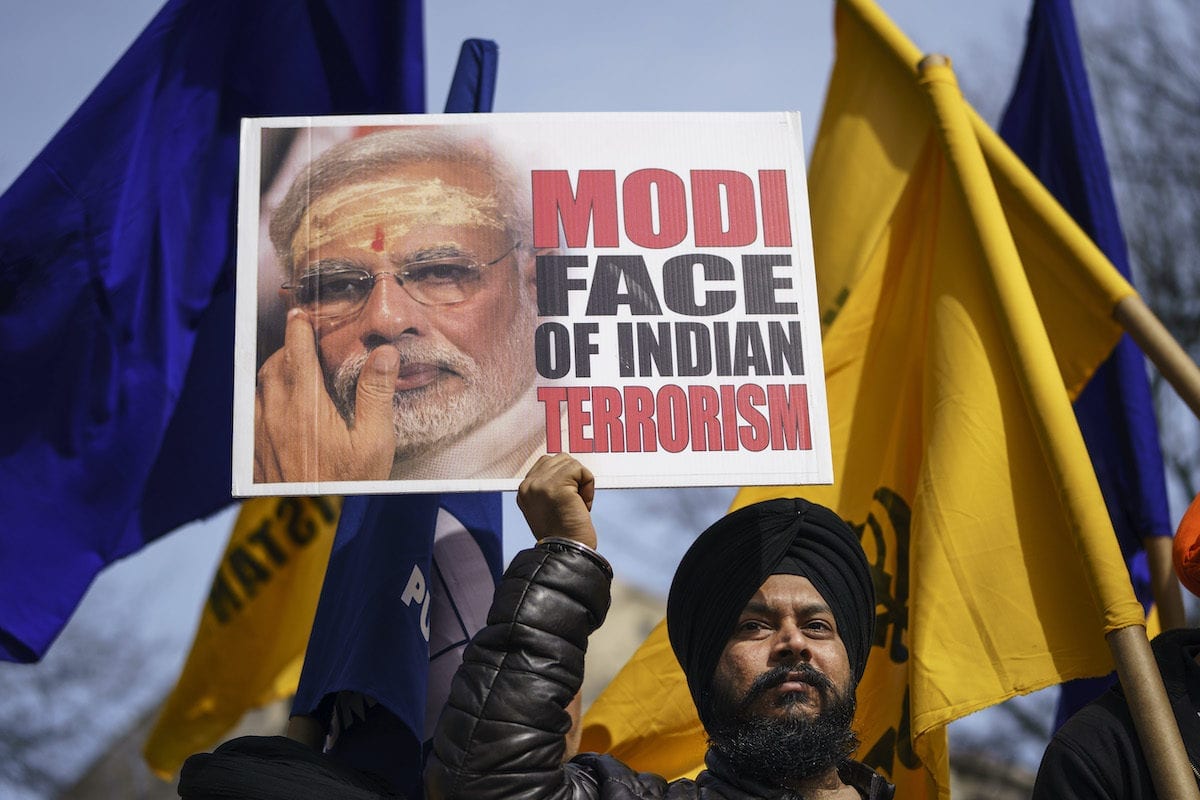 Members of Sikhs For Justice rally against Prime Minister of India Narendra Modi in Lafayette Square across the street from the White House on 18 February 2020 in Washington, DC. [Drew Angerer/Getty Images]

The UN decision to seek India's assistance in resolving the Palestine-Israel conflict is not only inexplicable, but also shows an incredible lack of judgement. Injecting some new blood into the so-called peace process — which, let's be honest, has been a spectacular failure — may well be a good idea, but surely there are better candidates than a country led by a Prime Minister with hands covered in Muslim blood and pushing an ideology built upon Hindu supremacy.

The context of the proposal could not be worse. Only a matter of days separated the UN delegation to New Delhi and the deadly sectarian violence targeting Muslims in the Indian capital. The violence over three days and nights killed 46 people, mainly Muslims, as mobs of Hindu supremacists rampaged through the streets in what looked distinctly like a murderous pogrom.

"The brutal and unchecked violence growing across Delhi cannot continue," said the head of the US Commission on International Religious Freedom (USCIRF), Anurima Bhargava. The commission was founded in 1998 to keep a check on religious freedom across the globe. Bhargava called on the Indian government to take "swift action to ensure the safety of all of its citizens," and expressed concern at reports that the Indian police stood by as mobs attacked their Muslim neighbours. Prime Minister Narendra Modi's government was accused of "failing in its duty to protect its citizens."

The USCIRF also raised wider concerns over what it described as attempts by the ruling Bharatiya Janata Party (BJP) government to "disenfranchise Muslims across the country, in clear violation of international human rights standards."

This appeared not to unsettle the UN delegation, which stressed India's long tradition of supporting the Palestinians. During their two-day visit, the UN delegation led by Senegal's permanent representative to the UN, Cheik Niang, met with senior ministers in the Modi government. Speaking to journalists on Tuesday, Niang said that there was no weakening of India's support for the Palestinian cause.

At the same press conference, Palestinian diplomat Majed Bamya dismissed claims that India had changed its position on Palestine in favour of Israel. He explained that Israel wanted to give the impression that there would be a "major shift" in India's policy but that was not the case. "We have to acknowledge as reality that it has not happened," he is reported as saying.

Such sanguine remarks are actually a world away from reality. India, enthralled as it is by Hindu supremacism, has discovered political, economic and, more importantly, ideological affinity with Israel that make any claims about its ability to play a neutral role in the conflict preposterous. Some have even suggested that India's relations with Israel are such that it is now deeply "complicit in Israel's regime of military occupation, settler colonialism and apartheid." 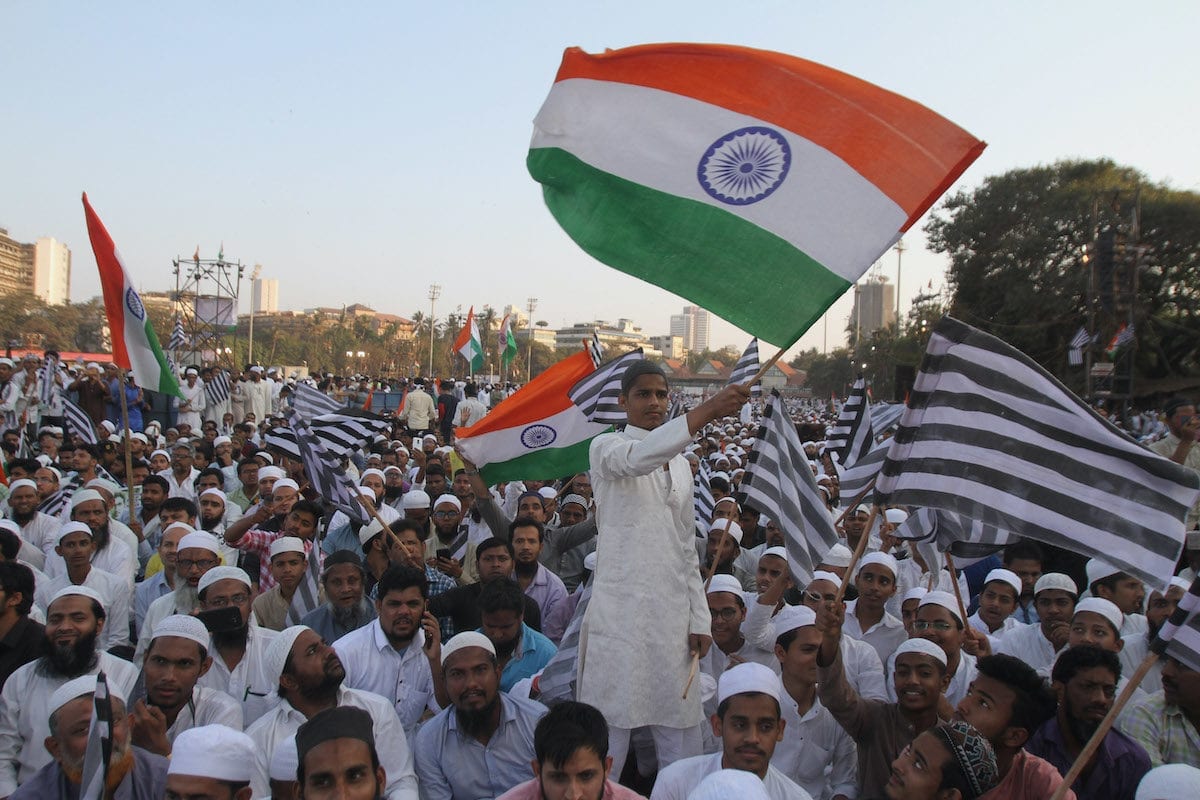 Calling on India to mediate between Israel and Palestine in the aftermath of such riots undermines everything the UN claims to stand for. India under Modi is not the same India that joined 72 other nations to vote in favour of the 1975 UN Resolution denouncing Zionism as "a form of racism and racial discrimination". At the time, India was part of the Non-Aligned Movement during the Cold War and played a trailblazing role in the isolation of Israel's close collaborator, Apartheid South Africa.

Nor is today's India the same as that of the country's founding father, Mahatma Gandhi. The revered leader had opposed the Zionist state believing it to be a colonial enterprise. He considered the idea of a Jewish national home in Palestine, as espoused by Zionism, to be an expression of ethno-nationalism, inimical to the values of secular liberal democracy.

The inspiration for the extremist who assassinated Gandhi in 1948, just a few months after India achieved its independence from Britain, was the same as that now espoused by Modi: the Hindu supremacism of Hindutva. "The roots of Hindutva and Hindu Rashtra," as explained here, "lie in an attempt to create a Hindu nation modelled on the European nation-state through the enforced cultural homogenisation of the entire population, especially religious minorities."

READ: Hindu nationalists are seeking the Israelification of India; they must be stopped

Echoing Nazism, Hindutva devotees deplore India's diversity and seek to create a nation out of a common race, a homogenous culture and civilisation. Just as the Nazis believed that Jews could not belong to the German people, Hindu supremacists reject Muslims and Christians as outsiders.

Highlighting the extent to which India has turned its back on the universalist vision of Gandhi is its solidarity with extreme versions of Zionism represented by Benjamin Netanyahu who, with a coalition of far-right parties, has become the longest serving Prime Minister of Israel.

Zionism and Hindutva are cousins, as I argued in a previous article. Both are political ideologies and subscribe to the same concept of a far-right ethno-nationalist movement that uses religion to achieve its aims. Furthermore, both misrepresent history to justify atrocities against minorities in pursuit of an exclusivist and discriminatory political vision. 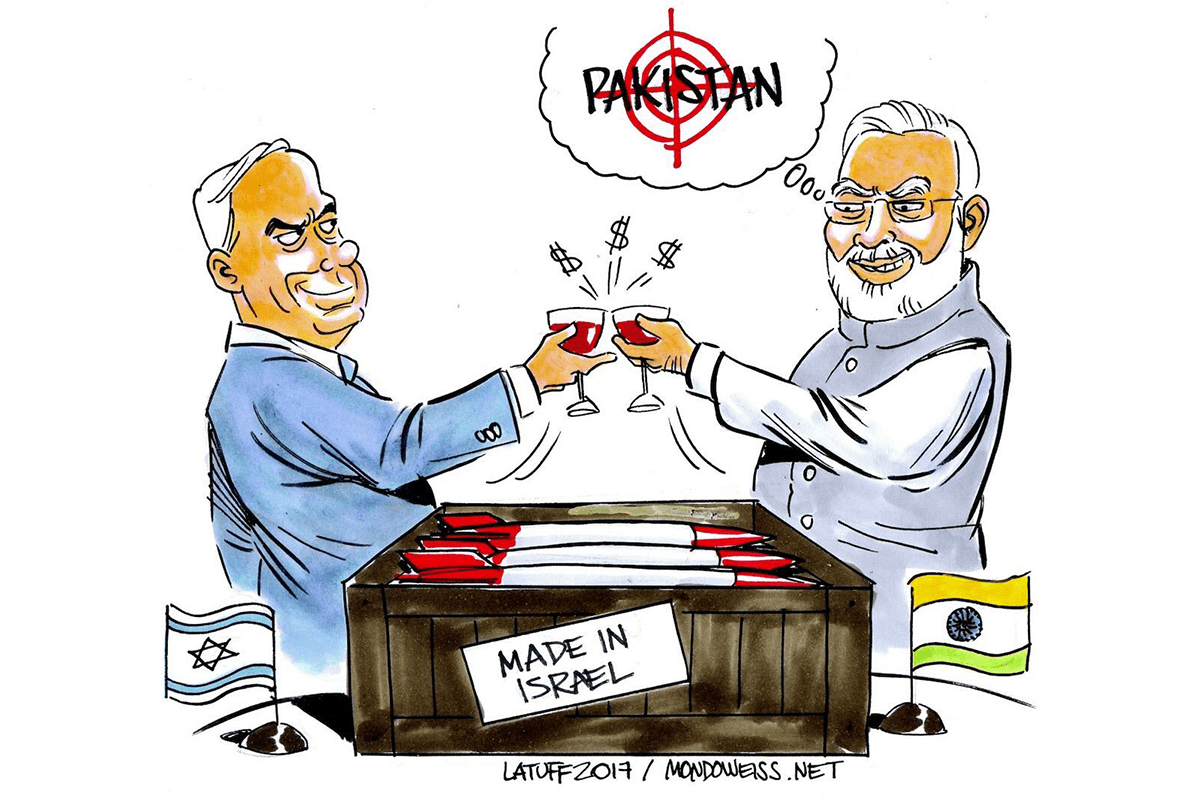 Netanyahu and Modi: Kashmir and Palestine are punchbags for their occupiers – Cartoon [CarlosLatuff]

Hindutva members, like their ideological counterparts in Israel, speak openly of ethnic cleansing and expelling minority communities. For extremist Hindus in India that includes Dalits, Muslims, Christians, Sikhs, Ravidassias and Buddhists. In Israel, it's the Christian and Muslim Palestinians. Their shared vision is rooted in fascism and white supremacy. Hindutva is identified commonly as the guiding ideology of the Hindu Nationalist Rashtriya Swayamsevak Sangh (RSS) of which Modi is a member.

A profile of RSS ideology shows that its leaders draw their inspiration from right-wing, fascist European groups and their leaders, including Hitler and Mussolini. Its long-time chief, M S Golwalkar, is said to have openly admired Hitler's "final solution" and wanted to apply the same approach in India to eliminate the country's minorities. This makes the strong bond between Modi and Netanyahu even harder to understand although the Israeli leader, just as paradoxically, has strong links with the current crop of far-right extremists in Europe and America. This perhaps confirms Zionism's racist tendency.

While the two countries under their current rulers can be said to enjoy an ideological affinity and subscribe to the exclusivist political vision of the far-right, both are also locked in a struggle with a large minority group challenging a long-term military occupation and human rights abuses, thus making them allies in ways that are rare on the global stage. Relations between the two countries have never been better. India is now the largest weapons market for Israeli arms manufacturers; the two countries carry out joint military exercises; and Israel uses the Negev Desert to train Indian soldiers in the best tactics for suppressing civilian populations, expertise learned through the suppression of Palestinians in the occupied Gaza Strip and West-Bank.

India in the grip of Hindu supremacism and Israel built upon Zionism are ideological bedfellows. In seeking India's help in Israel-Palestine, the UN is making a major mistake to the detriment of the people suffering under Israeli occupation. In doing so, it is diminishing yet further the organisation's standing in the world.