Exhibition of posters at gallery [Hareth Yousef]
Naima Morelli
naimamorelli
March 17, 2020 at 10:02 am

Palestinian ambassador Ali Kazak arrived in Australia in 1970, at the peak of the Palestinian revolutionary political and military activity. He found that the Zionist narrative was prevalent in public opinion, propagating a biased portrayal of the events unfolding in occupied Palestine. He decided to engage in efforts to provide a counter-narrative to refute the false claims being made by the Zionists, and requested materials and posters issued by the Palestine Liberation Organisation and Fatah departments of information. He began to circulate them in Australia, as well as collect them.

After many years in the diaspora, Kazak's poster collection finally made its way home to Palestine. Part of the collection is to be found in an exhibition at the Palestinian Museum in Birzeit, curated by Adele Jarrar. Called "Glimmer of a Grove Beyond", the show aims to outline the links between landscape representations and historical circumstances, through the medium of political posters.

Such posters came to prominence in Palestine between the mid-1960s and late-1980s as a means of motivating and mobilising political support in the national movement and revolution, and its armed struggle. In 1965, their proliferation was bolstered by the PLO's National Arts and Culture Unit, led by artist Ismail Shammout.

The ideology of the Palestinian freedom fighters in the armed struggle was mainly left-wing nationalist, socialist or communist. Its aim was to defeat Zionism, reclaim Palestine and establish it as a secular, democratic, non-sectarian state.

"These ideologies and then-political projects were interpreted as a visual language and subject, or even contained in the short lines written on the posters," explains Adele Jarrar. "That era also witnessed the recreation of a Palestinian identity, including a visual identity using characteristic symbols and subjects." 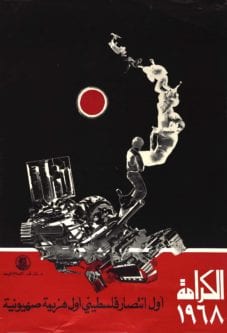 Published by the Palestinian National Liberation Movement (Fateh) on the anniversary of al-Karama Battle in 1977, this poster features an artwork by Emile Men'em with a caption that reads, "Al-Karama Battle, the First Palestinian Victory, the First Zionist Defeat." [Fateh]

The themes included the beauty of the stolen land, armed struggle and the fedayeen, memorialising the revolutionary Shaheed (Martyr), the brutality of the Israeli settler-colonial project and the plight of Palestinian refugees. The iconic symbols employed included the map of Palestine; the olive, pomegranate and orange; the keffiyeh and traditional Palestinian dress; the key (representing the return of refugees); weapons; Palestinian embroidery; birds, especially the dove; the farmers; flowers; and the anemone. Each of these symbols holds a special sentimental value in the Palestinian collective imagination and cultural heritage.

The decision to be focusing on the landscape arose for two main reasons. The collective importance of land for colonised Palestinians, for example, was due to the political situation. "Palestinians found themselves denied access to their land either because they were expelled to the diaspora, or because they are still living in different areas in historic Palestine but denied entering others," Jarrar tells me. "Today the contemporary Palestinian identity is being articulated in fragmented geographies."

The other reason is that the vision of the Palestinian Museum is to build up its own exhibitions. The previous show was "Intimate Terrains" curated by Tina Sherwell, which explored the landscape through Palestinian artists and the themes of erasure, fragmentation, distance and belonging, in a spectrum of artworks.

"Glimmer of a Grove Beyond" is divided into seven sections, classified according to iconography: Sowing Liberation; Agency and Sanctity; Devastation as Landscape; Manifesting Palestine; Fida'i (freedom fighter); Flowers and Anemones; and Reclaiming the Orange. Each section highlights distinct methods in which symbols or topics were employed, and sheds light on their relation to landscape. The seven sections have 32 posters in total.

Published by the Palestinian National Liberation Movement (Fateh) circa 1988, this poster features an artwork by A. Zulfikarpašić and M. Mikanović. The piece combines a glimpse of a wrecked house; amidst the rubble appears a painting of a new coloured bicycle laid over a destroyed one.

Published by the Palestinian Liberation Organization on the UN Palestine Day in 1985, this poster features nine drawings highlighting the universal right to homeland, the just claim Palestinians are denied to realise.

Published by the Palestinian Liberation Organization circa 1976, this poster features an artwork by Muʿīd ar-Rāwy with a photograph of Tel al-Zaatar Palestinian Refugee Camp, Beirut.

Published by the Popular Front for the Liberation of Palestine on the Nakba Remembrance Day in 1989, this poster features an artwork by Marc Rudin. The artwork depicts two bayonets; one rips through an orange fruit, the other is broken as it stabs a stone [Popular Front for Palestine]

The concept of orientalism, as well as lost geography or as fantasy of a Palestine that never existed are key aspects of the show. Here the original orientalist photographs are subverted into a new use. "The use of orientalism, for example, such as in a poster on Land Day, is to promote the reclamation of Palestine including our imagination, even though it has a photograph by the orientalist David Roberts," says Jarrar.

READ: These Chains Will Be Broken. Palestinian Stories of Struggle and Defiance in Israeli Prisons

From the very title of the show, which is quoting Jean Genet, to the names of the different sections, it is clear that a socio-political vision is accompanied by high poetic value.

"The poetic and humanitarian existentialist beauty of our aspiration to liberate our lands, is often unconsciously dropped out of our collective memory and contemporariness," Jarrar points out. "Taking into consideration that if this conscience was not crystallised into humanism, it would come to a dead end very quickly. This humanism and spirit of the Palestinian revolution and struggle inspired various anti-colonialist and anti-imperialist political movements and revolutions around the world."

This solidarity is highlighted in many posters in the show, designed by international artists, which also contributes to the significant richness in the different schools and styles. 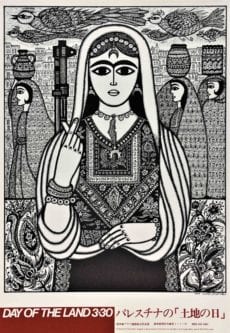 Designed by Toshio Sato and published on the Land Day in 1990, this poster features a painting by Palestinian artist Burhān Karkūtly. The artwork depicts a Palestinian woman wearing a Palestinian thobe and a Palestine map necklace

Media and Marketing coordinator Haneen Saleh says that the Palestinian Museum operates with an international vision: "We want to promote and spread the narrative of the Palestinians locally and internationally, and to present stories of resistance, persistence and hope, which are absent from the global Palestinian narrative."

The show opened on the 25 February and quickly attracted attention. Because of the precautionary measures taken against COVID-19, however, the Palestinian Museum is now closed until further notice. Nevertheless, the team at the museum is working on an online tour for the show soon.

"With this show, the Palestinian Museum adds another dimension to its important digital and transnational project," adds Director Adila Laïdi-Hanieh. "We take the international audience to a different, and deep, understanding of Palestinian history."