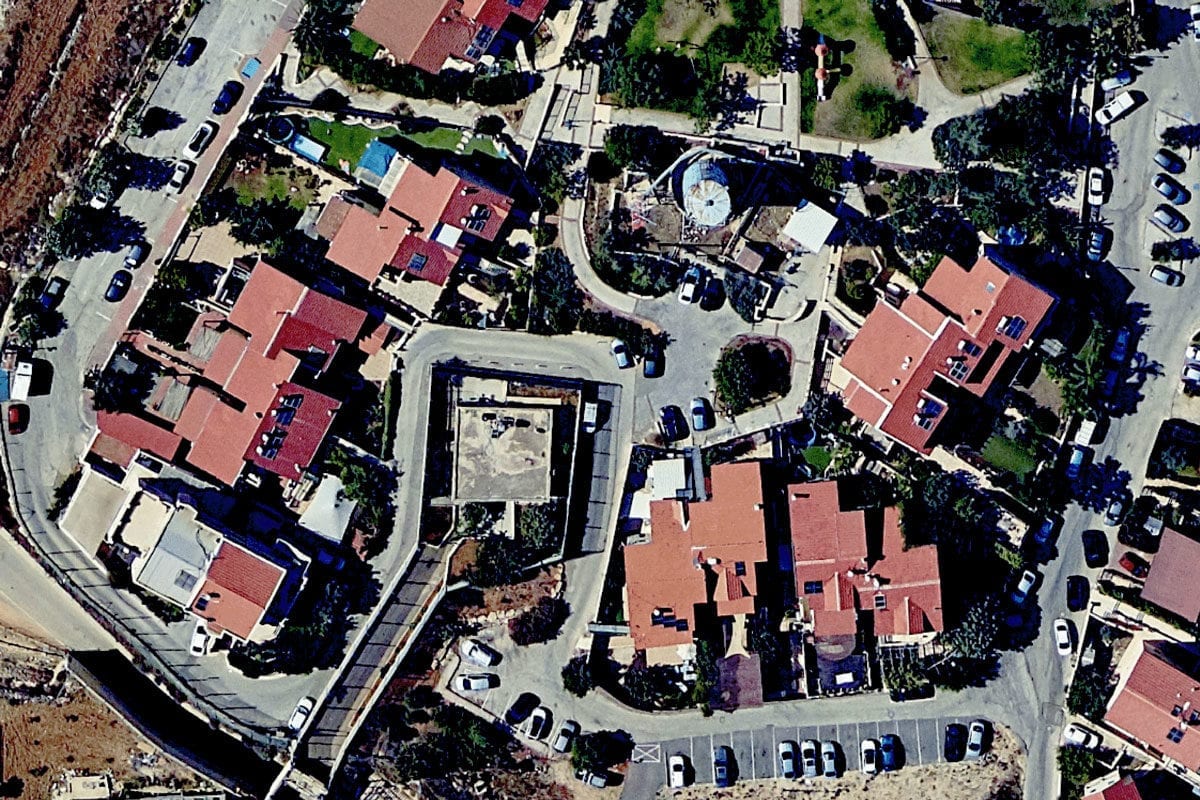 The Gharibs' house in Beit Ijza, caged by a fence and surrounded by the Israeli settlement of Givon Hahadasha, as seen here in a 2018 satellite image, west of Jerusalem [screen grab from Geomolg]
April 4, 2020 at 1:51 pm

Palestinian Saadat Sabri Gharib, 38, had never imagined that his house, which was built by his father in 1979, would be turned into a very narrow cage surrounded by barbed wire and surveillance cameras.

Gharib's house is located in the Biet Ijza neighbourhood, west of occupied Jerusalem. It was surrounded by about 100 dunams of land owned by Gharib's father. However, the Israeli settlers stole all of this land and kept the house, which is only 500-metres square.

Gharib told Anadolu Agency, that since 2008, his house has been turned into a very small cage surrounded with concrete walls and located in the middle of an Israeli settlement. It has only a very narrow passage with 12 cameras monitoring it.

Gharib, his mother, his wife and three children live in this house. "Our house is a real prison," he explains, adding:

"We are subjected to stone throwing, live bullet shooting, insulting and burning," Gharib, who owns all the documents that prove the ownership of the land, revealed.

In 1979, the settlers offered his father a large amount of money for the land, but he refused and said:

If you give me all of Israel's money, I would never concede an inch of my land.

Later on, the Israeli occupation stole it with its settlement power.

Putting pressure on Gharib in order to leave his house, the Israeli occupation prevents him from planting any trees near his house, from carrying out any renovation works or from making any repairs.

A few months ago, the water tank was damaged and I wanted to change it, but Israel refused. They want to push us to leave our house. But if the house was demolished, I would live in a tent. I will never leave my family's house to the settlers.

"We live a very difficult life. The gate of the passage leading to my house is controlled by the Israeli occupation and could be closed any time. In 2008, it was closed for three consecutive months, but we fought until it was opened 24 hours a day."

This neighbourhood is one of many others which were isolated from Jerusalem by the apartheid wall, so they were connected with the occupied West Bank through tunnels or bridges.

According to the Palestinian Bureau of Statistics, more than 50,000 Palestinians holding Jerusalem's ID cards were isolated by the apartheid wall and deprived from living in Jerusalem.

In 2002, Israel decided to build a 710-kilometre wall to separate the occupied West Bank from Israel and the illegal Israeli settlements in the depths of the occupied territories.