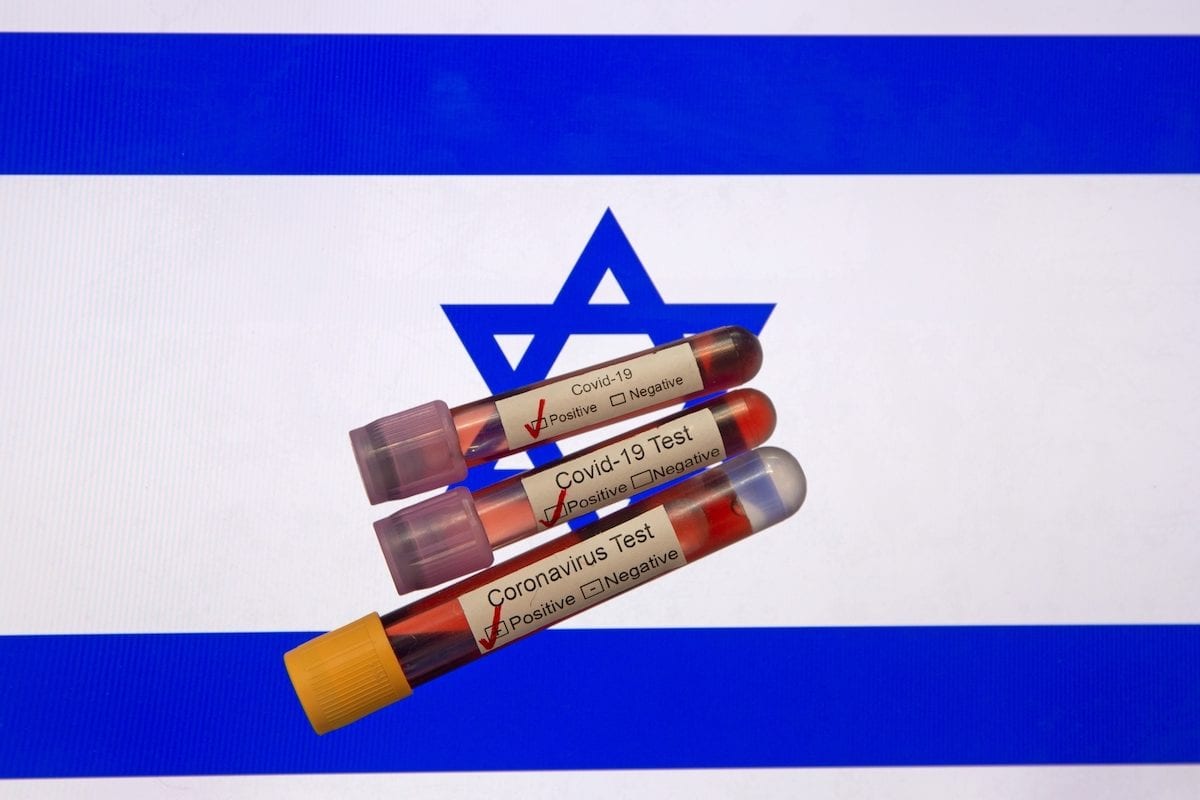 In this photo illustration coronavirus (COVID-19) positive blood samples are seen in front of a computer screen displaying the flag of Israel on 6 April 2020 in Izmir, Turkey. [Mehmet Emin Mengüarslan - Anadolu Agency] 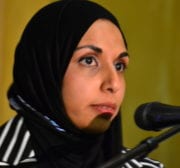 On 10-11 March several hundred guests gathered at the Divine Restoration Ministries on the outskirts of Bloemfontein, the capital of the Free State province in South Africa, to attend the Jerusalem Prayer Breakfast (JPB). The JPB is a prayer movement that aims to bring together government leaders, politicians and Christian leaders to – according to its website – "answer God's command and the Knesset's [Israeli parliament's] call to the nations to pray for the peace of Jerusalem and the prosperity of Israel."  Ending Israel's illegal occupation of Palestine is not part of this call to prayer.

Church-goers came from all over South Africa to attend various events as part of this faith-based pro-Israel advocacy initiative, which is supported by the Israeli parliament. About 480 people attended an evening worship session on 10 March. A group of 225 people attended the breakfast event the next morning, followed by a dinner prayer session attended by 160 people. JPB co-ordinator, Albert Veksler, was among the two Israelis, two Americans and a French national who were in attendance and who were carriers of COVID-19 but didn't know.

'Something very significant had happened'

Veksler dismissed the coronavirus, calling it a "distraction". He added that holding the JPB just as the World Health Organisation (WHO) had declared COVID-19 a global pandemic was "a great victory". "Something very significant had happened and we were witnesses and participants," Veksler told Gateway News in an interview immediately after the end of the event. He was right.

During the JPB in Bloemfontein, participants discussed how to lobby for Israel in South Africa using churches and political movements, shared prayers and sumptuous meals, and – unknown to anyone – the coronavirus. The faithful then scattered across the Free State province and South Africa, taking COVID-19 with them. Fifty-seven-year-old entrepreneur, Angelize de Lange, returned to Johannesburg. Member of Parliament and leader of the African Christian Democratic Party (ACDP), Reverend Kenneth Meshoe, who was a keynote speaker at the event, returned to his parliamentary duties in Cape Town. A couple who are pastors went back to the Northern Cape province, with others returning to KwaZulu-Natal and the Eastern Cape. Church leaders returned to their congregations.

On 16 March, the five foreign guests were tested for COVID-19 after South African President, Cyril Ramaphosa, announced that all international guests in South Africa must undergo tests before leaving the country. All five tested positive. The rush was now on to trace and test every person that came into contact with them.

Tracking teams were forced to expand their search beyond the borders of the Free State into five other provinces. The Health Department's tracing efforts were assisted by hundreds of Red Cross volunteers, as well as experts from South Africa's National Institute of Communicable Diseases. Mobile testing units were sent to the Free State to ensure every church member was tested. "We knew that it was vital to act quickly in the Free State and mobilize resources to the area for large scale testing, track and tracing and quarantine," said Health Minister, Zwelini Mkhize. By 2 April, Mkhize reported that 1,600 out of 1,700 contacts in six provinces had been traced and tested.

The fallout from the JPB gathering was widespread and unprecedented in terms of local transmission. The Free State province did not have a single known case of the coronavirus when the JPB began on 10 March. By 31 March, there were 74 cases – more than 67 were a result of the JPB. By 8 April, it had risen to 88.

Six days after leaving the JPB, Meshoe – unaware that he was exposed to COVID-19 – met with President Ramaphosa, Deputy President David Mabuza and the leaders of various political parties in Cape Town to discuss South Africa's response to the coronavirus pandemic. This sparked a flurry of testing among political leaders. Ramaphosa tested negative.

The Duduza Clinic, which serves impoverished communities in east Johannesburg, was shuttered indefinitely from 2 April after a nurse tested positive. She had been at the JPB in Bloemfontein.

Pastor Mohau Rammile represented the Global Reconciliation Ministries at the JPB, he passed the virus on to fellow GRM minister, 86-year-old John Hlangeni. Hlangeni died on 30 March. On 8 April, as South Africa entered Day 13 of a 21-day lockdown, Mondli Mvambi, spokesperson for the Free State Department of Health confirmed the deaths of 76-year-old Willem van Tonder and 55-year-old Frans Thafeni. Both deaths were connected to the JPB event.

The JPB event is an example of a "super-spreader" event since many of those who attended later came into contact with large numbers of people when they returned home. With high unemployment and poverty levels, HIV and Tuberculosis being so rife in communities around Bloemfontein and so many people therefore being immune-suppressed, this was catastrophic for the Free State province. Many live in overcrowded townships and informal settlements, where social distancing and lockdown regulations are difficult to enforce, and basic hygiene is difficult to observe.

The central question is why were the Israeli organisers so desperate to hold the JPB in South Africa despite the lethal spread of coronavirus? The answer lies in Israel's urgent need to find new friends.

Benignly described as a "church gathering" in South African media, and with a mission statement peppered with Biblical references, the Jerusalem Prayer Breakfast claims that its objective is simply to pray for peace. In reality, the JPB – clothed in religious garb – is a vital part of Israel's political lobbying efforts in Africa.

JPB's Director, Albert Veksler, headed up the Israel Empowerment Lobby (IEL) between 2012 and 2014. A key component of IEL's work is "Spiritual Diplomacy" which leverages a common belief of many Christians – particularly from Evangelical, Pentecostal and Charismatic churches – that the State of Israel is special to God and a fulfilment of Biblical prophecy. Veksler now uses the JPB as a vehicle to capitalise on the centrality of Israel in Christianity, especially in Africa. As Israel faces a growing international backlash for its military occupation of Palestine that is increasingly being compared to apartheid South Africa, this sentiment has proven useful.

READ: Israel failure to deal adequately with the pandemic could have long-term effects

Israel has had to look beyond its traditional Western allies for support. Prime Minister Benjamin Netanyahu's regime has turned to sub-Saharan Africa in an effort to build new alliances, fight off a global Boycott, Divestment and Sanctions (BDS) campaign, and win support at the United Nations (UN). Throughout Africa, Israel is using Christian evangelicals to spread its propaganda, neutralise criticism of Israel's human rights violations, and gain sympathy and loyalty for Israel in Africa. Israel's partnership with African churches forms part of a continent-wide diplomatic effort, aimed at dissolving Africa's traditional support of Palestinian self-determination and justice. The JPB is not just about praying, it's about political lobbying.

Ghana hosted the first JPB in Africa in September 2018. In May 2019, the movement moved to East Africa and Uganda. Recognising South Africa's political and moral value on the continent, and the need to gain a presence in southern Africa and neutralise South Africa's growing boycott movement, the JPB was brought to Bloemfontein in 2020. With the South African government already beginning the process of downgrading relations with Israel, there was widespread desperation in Tel Aviv. Not even an unprecedented global pandemic was going to stop Israel's advocates from trying to gain a foothold in South Africa.

Israel already has a toxic history in South Africa. But its desperate insistence on lobbying in the country and holding the Jerusalem Prayer Breakfast during the coronavirus pandemic has now become deadly. Israel's brutal occupation of Palestinian life and its general approach to governance is to sacrifice the weak. In Bloemfontein, South Africans experienced that first-hand.