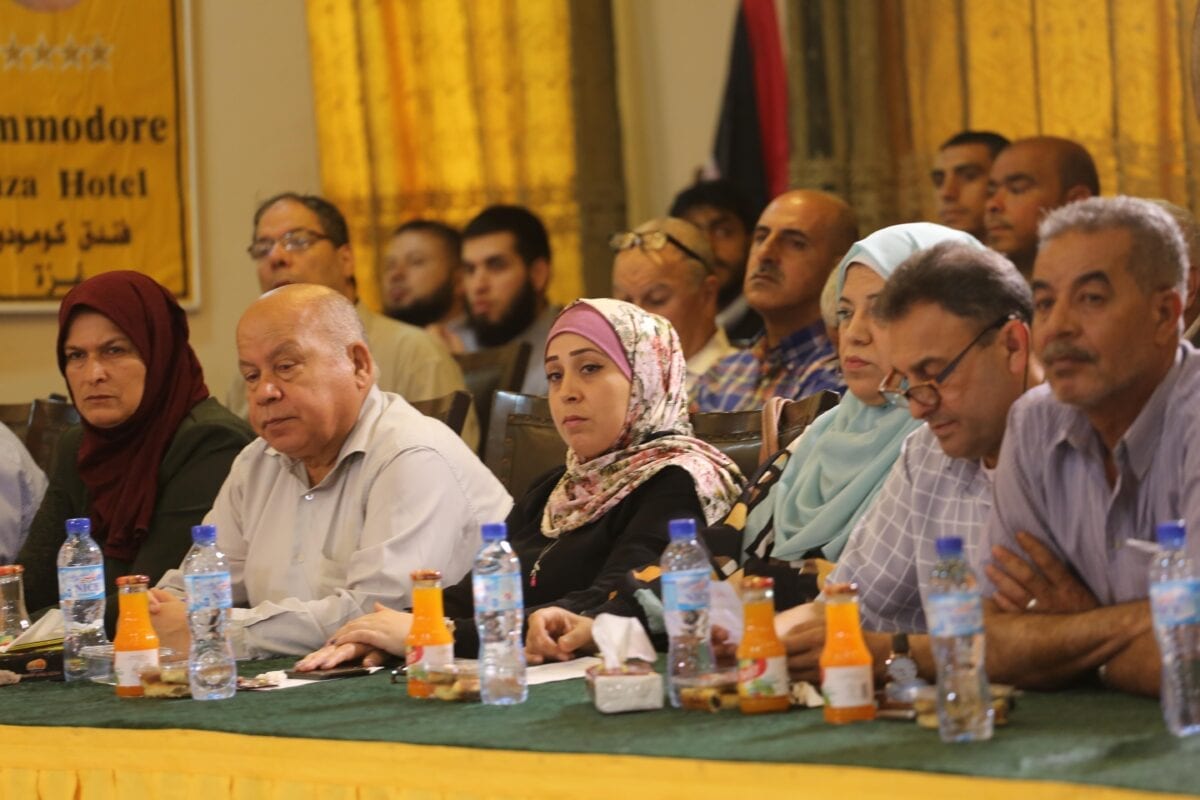 The national and Islamic forces and factions in Gaza, including Hamas and Fatah, reach an agreement on a unified national plan of action to confront the US' 'deal of the century' and Israel's annexation plans on June 28, 2020 [Mohammad Asad / Middle East Monitor]
Dr Adnan Abu Amer
AdnanAbuAmer74
July 9, 2020 at 7:01 pm

Recent meetings between representatives of Fatah and Hamas have had major coverage in the Israeli media. They are a source of great concern in case they provide Hamas with political and security cover in the occupied West Bank enabling it to resume resistance operations against Israel if the Palestinian Authority stops its own persecution of the movement.

The most recent online meeting was between Jibril Rajoub, Secretary General of Fatah's Central Committee and the former head of the Preventive Security Force, and Saleh Al-Arouri, the Deputy Head of the Hamas Political Bureau, whom Israel describes as the "orchestrator of the armed attacks in the West Bank." Israelis believe that the meeting gives Hamas the green light to operate in the West Bank, even though Mahmoud Abbas does not want the return of armed resistance. The Rajoub-Al-Arouri meeting was followed by another between Ahmed Helles, the Fatah official responsible for the Gaza file, and Husam Badran, the head of national relations for Hamas. Israel fears that this may signal an end to the relatively calm situation on the ground.

Over the past decade we have witnessed many meetings between Fatah and Hamas, and many hugs, smiles and handshakes. On almost every occasion — too numerous to count — we heard from Gaza, Cairo, Beirut, Doha and Moscow, as well as secret locations, that a new leaf was being turned in their mutual relations. However, what all of these announcements have in common is that nothing came out of them. Can we expect anything different this time?

READ: International opposition to Israel annexation must not be underestimated, warns Israel official

The Israelis noted two new things about the recent meetings: neither Rajoub nor Al-Arouri made any public statements about ending the division, forming a unity government or holding new elections; and the party which encouraged the veteran leaders to speak to each other was Israel. From the Israeli point of view, the PA had a clear purpose in the post-meeting press conference, and it was not reconciliation with Hamas. It only wanted to anger Israel after stopping its security coordination. However, giving Hamas the green light to operate in the West Bank is the next step in the anti-annexation campaign. Of course, they did not call it that, but that was the conclusion when we heard phrases such as "a common struggle in the field". Rajoub declared, "We have no enemy but Israel" and Al-Arouri seemed happy with the opportunity and called for a joint struggle in the West Bank.

Despite all of this, the Israelis are confident that Abbas will stick to his policy of opposing armed struggle. I presume that he does not really want to see the green flags of Hamas appearing on every corner in the occupied Palestinian territory. However, when Rajoub spoke of Hamas in terms of a joint fight against Israel's annexation plan, with the man responsible for establishing the military infrastructure of Hamas in West Bank sitting in the virtual chair next to him, he runs the risk of riding the tiger. This move by Fatah and Hamas may have immediate consequences on the latter's motives for carrying out armed attacks in the occupied territory.

Discussion groups in Israel, meanwhile, insist that the Rajoub-Al-Arouri meeting signals a partnership between Fatah and Hamas. Such cooperation distresses Israelis because, no matter how limited it might be, it remains a major development as far as their country is concerned. The speed with which agreement between the two movements was achieved has surprised Israel's security services, although they would not have been blind to the possibility as soon as Benjamin Netanyahu announced his annexation plan.

The Israelis do not pay much attention to what is said in Palestinian press conferences held jointly by Fatah and Hamas, because what is important is what is happening on the ground. This depends on the PA announcing that it will not arrest Hamas members and will grant them permission to operate in the West Bank.

When talking about these Fatah-Hamas meetings, the Israelis provide some background information about those taking part. Rajoub, for example, is one of the main contenders to succeed Abbas, and has allied himself with the former head of intelligence, Tawfik Tirawi, and Yasser Arafat's nephew, Nasser Al-Qudwa. He even reconciled to some extent recently with his old rival Mohammed Dahlan, who was deported from occupied Palestine and lives in exile in Abu Dhabi and Serbia, and still tries to buy friends and influence within Fatah's ranks.

READ: Opposition to Israel's annexation plans must be followed by an end to its favoured status

According to these Israeli discussion groups, Rajoub is not Abbas's choice for his successor nor that of the PA. However, the PA leader chose Rajoub to coordinate protests against Israel's annexation plans, and Rajoub is also promoting himself as the only man in Fatah able to reach an understanding with Hamas. Rajoub's brother, Sheikh Nayef Rajoub, by the way, is a senior Hamas executive official in the West Bank.

Al-Arouri is a sharp and sophisticated man, who was quick to understand the benefits of a meeting with Rajoub. He is now convinced that Hamas will be able to organise large demonstrations in the West Bank, something which Fatah has been unable to do. Hamas activists will be immune from arrest by the Palestinian security forces and can regroup, at least in political circles.

The Israeli reading of this is that the Fatah and Hamas meetings may create a positive situation in the Palestinian arena, with clashes between the movements' leaders replaced by coordination and mutual guarantees. That is the last thing that Israel wants.