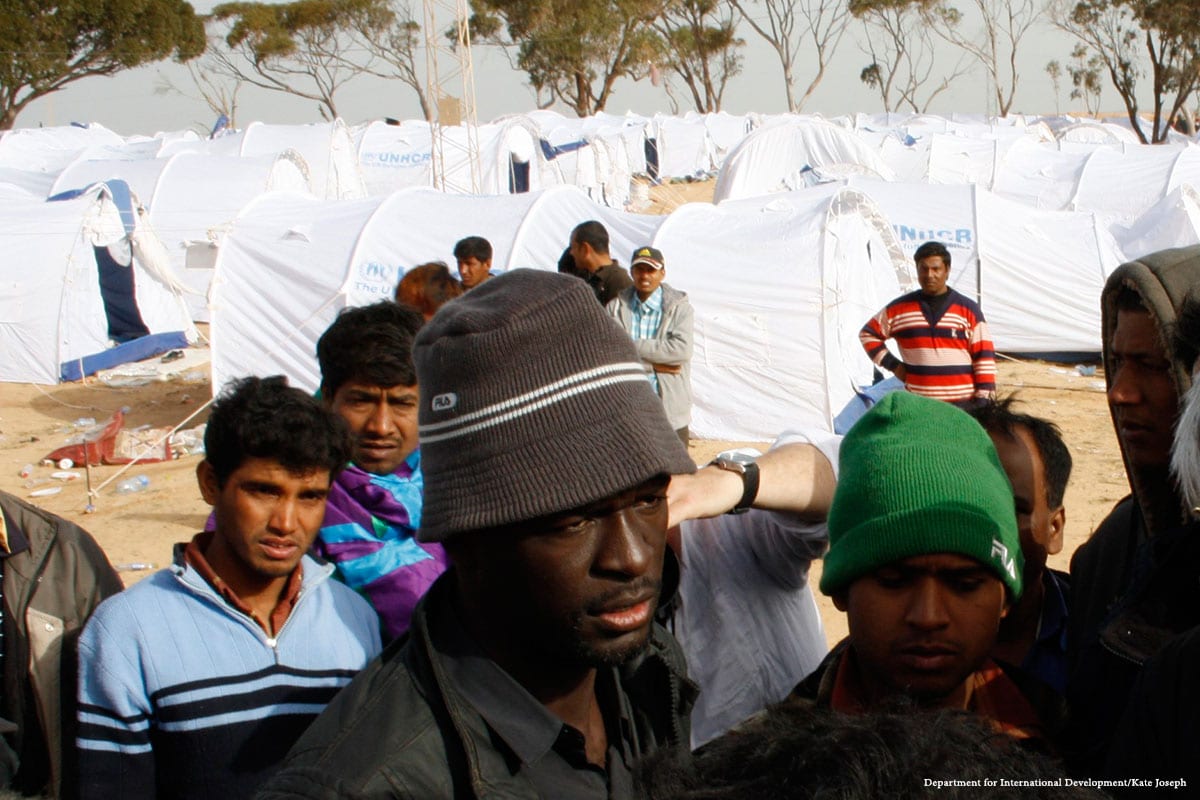 Migrants can be seen at a shelter in Libya, 30 January 2018 [Department for International Development/Kate Joseph]
October 8, 2020 at 3:48 pm

A Nigerian migrant was burned to death in Tripoli on Tuesday, Reuters has reported. According to the Libyan Interior Ministry, three Libyan men have been arrested on suspicion of attacking and killing the migrant worker, who has not been named.

Witnesses said that the suspects forced their way into the factory where the victim was working and set him on fire. The UN has described the man's death as "another senseless crime" in Libya.

"We are horrified by the killing of a Nigerian migrant worker in Tripoli, Libya by three men [on Tuesday]. The young man was burned alive, in yet again another senseless crime against migrants in the country," tweeted Federico Soda, the head of the UN's International Organisation of Migration (IOM) mission in Libya. "Those responsible must be held to account."

We are horrified by the killing of a Nigerian migrant worker in Tripoli, #Libya by three men yesterday.

The young man was burned alive, in yet again another senseless crime against migrants in the country.

There are half a million migrants in Libya according to the UN mission, some of them having worked in the oil producing country before it descended into chaos in 2011. Others are passing through the North African country en route to Europe. The IOM and the UN refugee agency (UNHCR) have both said repeatedly that Libya should not be classified as a safe place for migrants.

According to a report published by Amnesty International last month, tens of thousands of refugees and migrants in Libya are trapped in a vicious cycle of cruelty with little to no hope of finding safe and legal routes out. Thousands have attempted the perilous sea crossing to Europe this year, and hundreds have drowned.

In July, three migrants from Sudan were shot dead by Libyan authorities while trying to escape from detention in Khums. In May, some 30 mostly Bangladeshi migrants were shot dead in a southern desert town after being abducted by a local gang. Moreover, in August, the Libyan Red Cross recovered the bodies of 22 immigrants off the coast of Zuwara in western Libya.

Today, 22 bodies were retrieved by the Libyan Red Crescent in Zwara, #Libya.

These painful deaths are the result of the increasingly hardening policy towards people fleeing conflict and extreme poverty, and a failure to humanely manage migration flows. pic.twitter.com/s0oW0EVGwx