Qatar to cooperate with Amnesty over violations against domestic workersÂ

Qatar announced on Tuesday that it is willing to cooperate fully with Amnesty International to investigate violations against domestic workers revealed in a report issued by the rights watchdog.

"If proven to be true," said the government communications office, "the allegations made by the individuals interviewedâ€¦ constitute serious violations of Qatari law and must be dealt with accordingly." The official statement added that the Ministry of Administrative Development, Labour and Social Affairs is ready to work with Amnesty to investigate the allegations and ensure that "all guilty parties are held to account".

It pointed out that labour policies in Qatar are subject to constant review, including those related to domestic workers, and noted that the recommendations in the Amnesty report include several initiatives that are already or about to be implemented. "Since the 2017 Domestic Workers Law came into force, Qatar has made more effort than any other country in the region to deal with the needs and concerns of domestic workers." 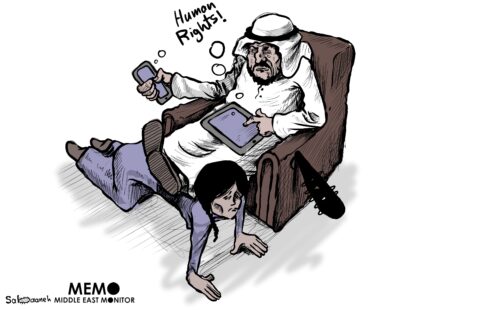 Maids being abused in the Middle East – Cartoon [Sabaaneh/MiddleEastMonitor]

Earlier on Tuesday, Amnesty International said that female domestic workers in Qatar are being subjected to extreme levels of abuse, including physical abuse, degrading treatment and exploitative working conditions. The workers have described how abusive employers belittled them by pulling their hair and spitting on them, and revealed that they have been beaten, kicked and punched.

Amnesty interviewed 105 women, of whom 85 per cent said they regularly work more than 14 hours a day and rarely or never get days off. Their employers, meanwhile, confiscate their passports.

There are almost two million migrant workers in Qatar, most of them from poor countries such as Bangladesh and Nepal, as well as India. According to Amnesty, about 173,000 women work in the domestic service sector in the Gulf State, half of them in private homes.

As the host country of the 2022 FIFA World Cup, Qatar has been under the international spotlight over its treatment of migrant workers. The government in Doha has recently started to reform working conditions for foreign workers by implementing a minimum monthly wage of 1,000 Qatari riyals ($275) and allowing foreign workers to change jobs without the consent of their previous employer.

"[These reforms] are not likely to significantly reduce abuse or improve conditions for domestic workers without additional measures taken to enhance protection and ensure implementation," insisted Amnesty.