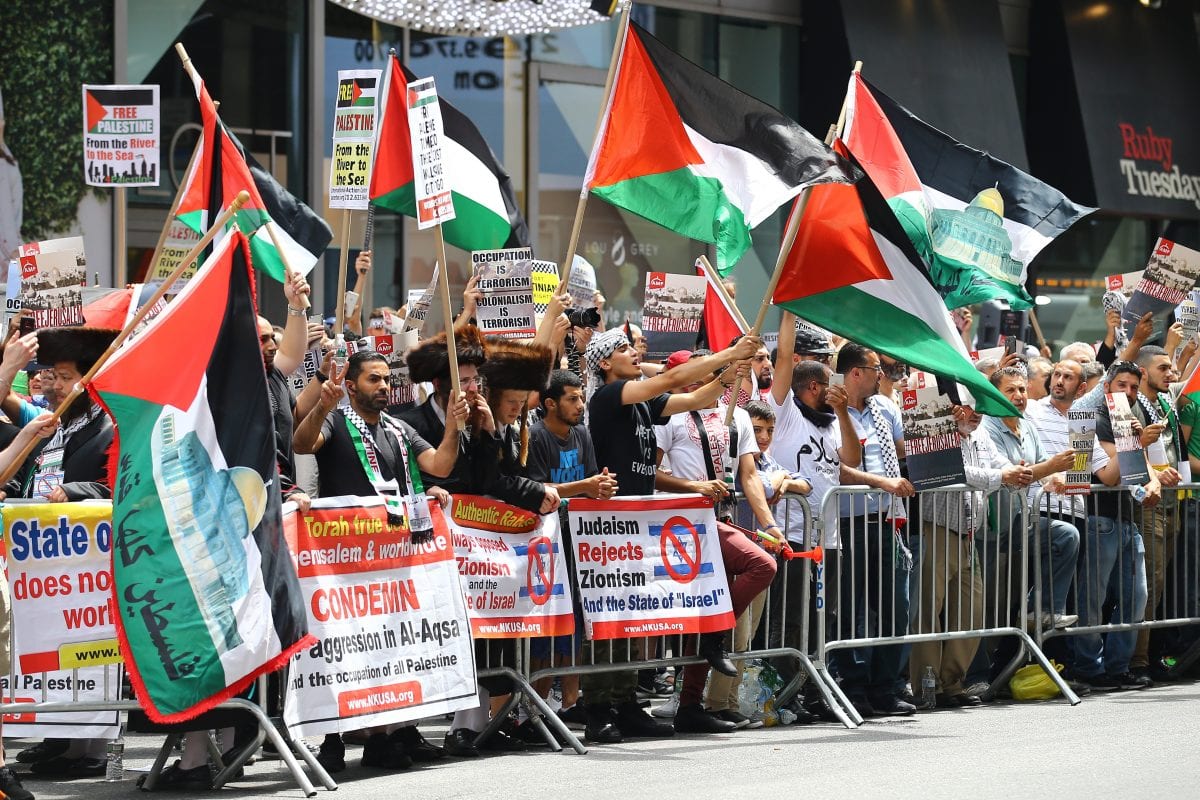 People hold banners and flags during a protest against Israel in the United States on 22 July 2017 [Volkan Furuncu/Anadolu Agency]
October 21, 2020 at 2:09 pm

Pro-Palestinian groups in America have won a famous victory after a three-year legal battle against a lawsuit holding them responsible for an act of terrorism carried out in 1996. A federal court ruled that American Muslims for Palestine (AMP) and Americans for Justice in Palestine (AJP) are not liable for the $156 million in damages sought by Stanley and Joyce Boim.

The husband and wife, whose teenage son David Boim was fatally shot in 1996 at a bus stop near Jerusalem, was awarded $156 million in damages in a 2004 legal case under the Anti-Terrorism Act. The Boims attempted to collect the sum from the defendants to the original lawsuit, however these entities had become defunct.

In 2017 the Boims went after AMP and AJP claiming that they were "alter egos" of the defunct groups that a jury found liable in 2004 for the death of their 17-year-old son David. The two entities did not exist at the time. AMP was formed in 2009 as a national education and grassroots-based organisation, dedicated to educating the American public about Palestine and its rich cultural, historical and religious heritage. AJP is the legal business name for AMP.

AMP Chairman Dr Hatem Bazian dismissed the 2017 lawsuit as "frivolous" saying that it was an attempt to use "the Islamophobic environment we are in to try to tarnish and defame an organisation that is in good standing, and has been working diligently to provide a perspective on the Palestine cause to the American public."

In their complaint filed in a Chicago federal court, the Boims said they had collected only a "small fraction" of the judgment, and the defendants should be held civilly liable for the rest under the federal Anti-Terrorism Act. They also continue to insist that "it never was their intention to get rich" from the lawsuit.

The federal court dismissed the suggestion that AMP was in any shape or form liable. The eight-page judgement seen by MEMO says that the Boims "do not present evidence that AMP and AJP and the defunct Boim defendants had substantial continuity in operations, ownership, leadership, the same business purpose or that there was a transfer of assets – nor do they set forth evidence of unlawful motive".

The judge accused the Boims of offering "speculative allegations" centred mainly around Bazian, who they claimed "fully subscribed" to Hamas. Dismissing their allegations, the court refuses to infer that because Bazian had supported Palestinian issues he was somehow connected to Hamas, as the plaintiffs suggest.

Lawyers from the Constitutional Law Centre for Muslims in America (CLCMA), which defended AMP, spoke of the significance of the victory. "We are thrilled for our clients after this long and hard-fought battle," commented Christina A. Jump, Civil Litigation Department Head for CLCMA.

"Without CLCMA's ability to work for non-profits like AMP free of charge, due to the generosity of our operating grant funded by many small donations from across the country, a blameless non-profit would have been forced out of existence solely because of the nationality of its members and the culture which it works to preserve. The right legal decision came through today, after many years, many depositions, and a lot of fishing expeditions in discovery – which all led nowhere. Today we celebrate on behalf of our clients, and look forward to being able to do so even more often in the future."