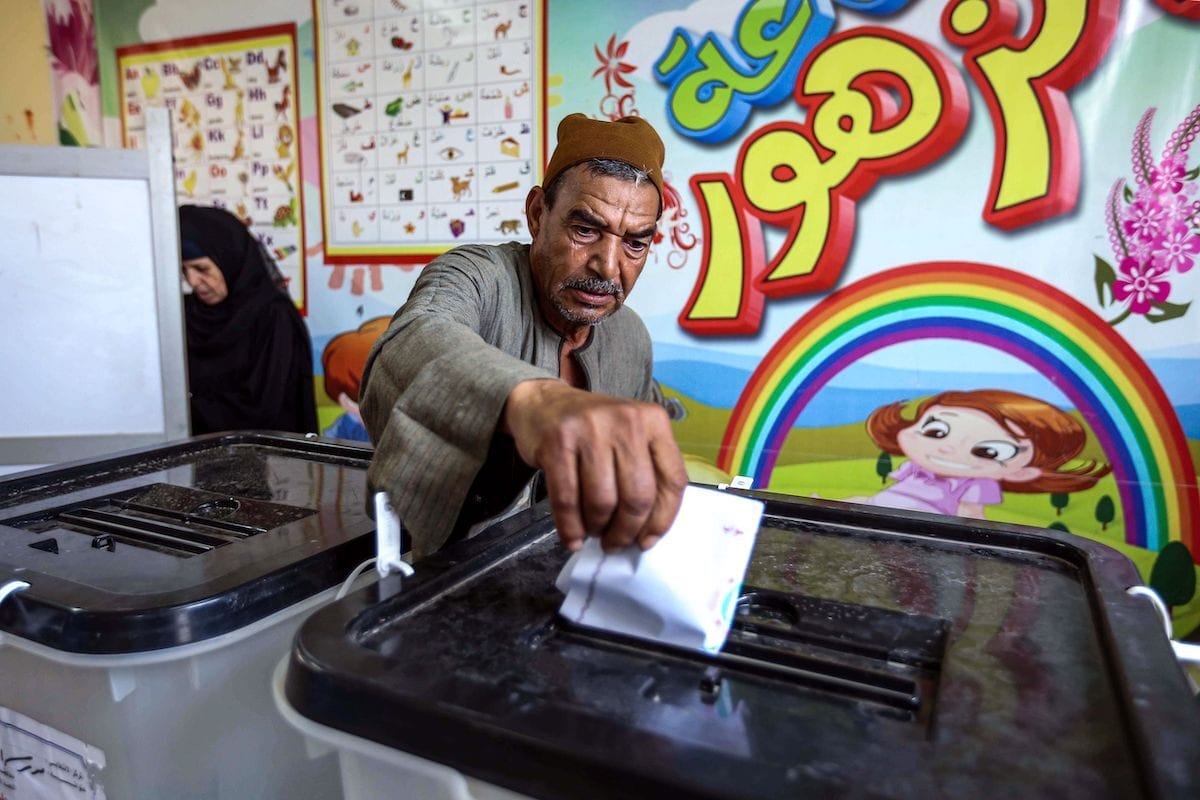 A man casts his ballot at a polling station in El-Ayyat, south of the Egyptian capital on 24 October 2020, during the first stage of the lower house elections. [KHALED KAMEL/AFP via Getty Images]
October 25, 2020 at 1:15 pm

Polls opened in Egypt on Saturday for parliamentary elections that will stretch over several weeks and are set to be dominated by supporters of President Abdel Fattah al-Sisi, Reuters reports.

A first-round of voting will end on Sunday, with a second-round on Nov. 7-8. Run-offs will take place in late November and early December.

The polls are being held with a new electoral law under which 50% of 568 contested seats will be allocated to pre-selected lists that take all the seats in an electoral area if they win a majority of votes. Opposition politicians say that lists led by pro-government parties are tightly vetted and hard to compete with.

The remaining contested seats will be allocated to individual candidates, and Sisi can appoint up to 28 legislators directly.

Mostaqbal Watn (Nation's Future), which in August won nearly three-quarters of the contested seats in an election for Egypt's Senate, an advisory body, is the favourite to come out top.

The party has no formal ties to Sisi but enthusiastically backs his programme.

As Sisi has consolidated control, interest in politics has dropped, with electoral turnout gradually declining.

As he voted on Saturday, Prime Minister Mostafa Madbouly celebrated the "democratic climate" in Egypt and called on Egyptians to participate.

"We must vote for the best, in order to uplift ourselves and be a great country," said Mohamed Abdel-Aal, a pensioner voting in the neighbourhood of Imbaba in Giza.

READ: Al-Sisi's Egypt is a land without justice

Another man, who declined to be named, said he was voting to avoid a 500 Egyptian pound ($32) fine which state media has reported could be imposed by the election authority on non-voters. He said he didn't trust any candidate and had cast a blank ballot.

Five voters out of the dozens at one polling station in Imbaba told Reuters that they were promised 50 or 100 pounds ($3.20 or $6.40) by people describing themselves as representatives of a Nation's Future candidate, if they voted for him.

People wearing T-shirts with the party logo could be seen handing out coupons that voters said could be exchanged for cash to a crowd near the polling station. Reuters could not independently verify if there had been promises of cash for votes.

Asked about this, Ahmed al-Shaer, a senior Nation's Future official, said the party rejected using money to influence voters and would investigate any violations, adding that other candidates may be using the party's logo to gain votes.

Sisi has overseen a sweeping crackdown on political dissent since leading the ouster in 2013 of the Muslim Brotherhood's Mohamed Mursi, who was freely elected in 2012.

Both Islamists and liberal opponents have been targeted.