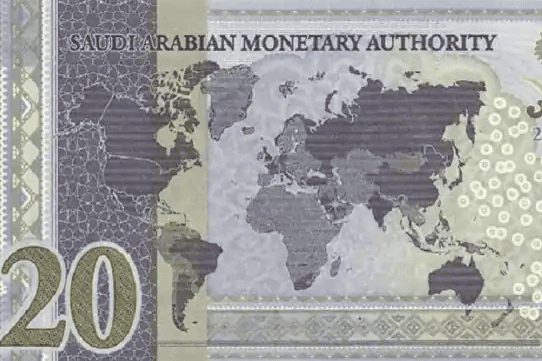 Saudi Arabia has angered both India and Pakistan after leaving Kashmir out of its map of the two countries on its new banknotes, leaving both countries confused and outraged at a move that gives the disputed region symbolic independence.

The new banknotes carry images of world maps to commemorate Saudi Arabia's presidency of this year's G20 summit. On the new 20 Riyal banknote, the disputed region of Kashmir seems to be independent and belonging to neither of the rival South Asian states.

The map on #SaudiArabia 🇸🇦newly issued 20 Riyal banknote shows #Kashmir, #Jammu, and #Ladakh are not #Indian 🇮🇳territories. The banknote released to mark Saudi Arabia's presidency of the #G20 grouping. pic.twitter.com/afKP8vo1Ai

Anger erupted in New Delhi yesterday because of the new note. External Affairs Ministry spokesperson Anurag Srivastava said that India has conveyed its "serious concern to Saudi Arabia, both through their ambassador in New Delhi as well as in Riyadh, for this gross misrepresentation of India's external territorial boundaries on an official and legal banknote of Saudi Arabia and asked the Saudi side to take urgent corrective steps in this regard."

The Saudi banknote also removed the areas of Gilgit-Baltistan and Azad Kashmir from Pakistan's territory, leaving it bereft of its claimed sovereignty over those regions.

Riyadh's controversial move comes at a time when its relations with its two allies have shifted markedly recently. The Kingdom has built closer ties with the Indian government under Prime Minister Narendra Modi while being colder towards Pakistan.

Riyadh and Islamabad have for decades had strong cooperation and bilateral relations in finance, trade and the military, but they have largely broken down over the past year. Saudi Arabia, for example, refused Pakistan's request to convene a special meeting of the Organisation of Islamic Cooperation (OIC) over India's occupation of a large part of Kashmir.

Foreign Minister Shah Mahmood Qureshi said in August that if it keeps refusing to hold the meeting, then Pakistan would take matters into its own hands. "If you [Saudi Arabia] cannot convene it, then I'll be compelled to ask Prime Minister Imran Khan to call a meeting of the Islamic countries that are ready to stand with us on the issue of Kashmir and support the oppressed Kashmiris."

The Saudis responded by ending a huge loan and oil deal with Pakistan, and snubbed its efforts to mend relations when Crown Prince Mohammed Bin Salman refused to meet Pakistan Army Chief of Staff when he visited the Kingdom.

This is not the first time that such tension has affected relations between the two long-time allies. Pakistan was pressured by Saudi Arabia not to attend a major summit in the Malaysian capital Kuala Lumpur in December last year due to the participation of the Kingdom's regional rivals Iran and Turkey.

A China-Iran deal could provide Pakistan with windows of opportunity