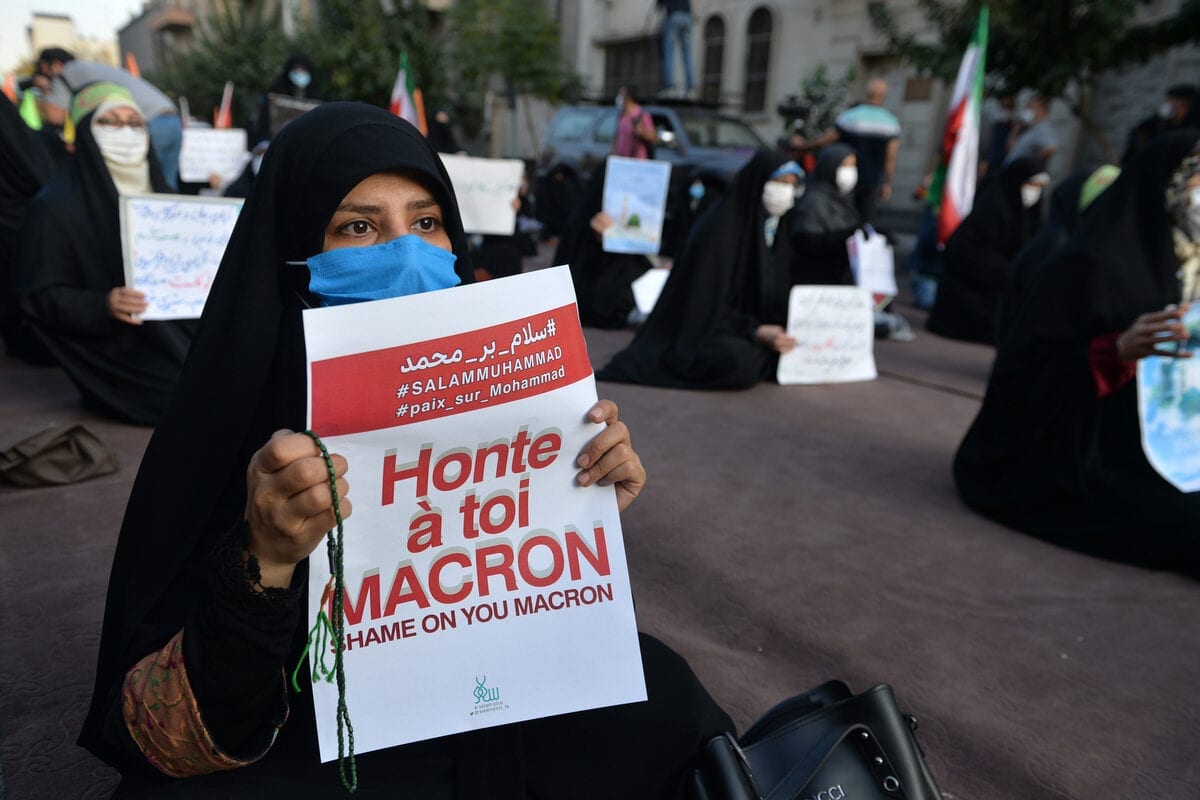 Demonstrators gather in front of Embassy of France in Tehran during a protest against the publication of cartoons of Prophet Muhammad in France and against President of France Emmanuel Macron over his anti-Islam remarks, on October 28, 2020 in Tehran, Iran [Fatemeh Bahrami/Anadolu Agency]

There is no moral or ethical justification for the killing of innocent people, anywhere. Therefore, the murder of three people in the French city of Nice on October 29 must be wholly and unconditionally rejected as a hate crime, especially as it was carried out in a holy place, the Notre Dame Basilica.

However, we would be remiss to ignore the political context that led a 21-year-old Tunisian refugee to allegedly stage a knife attack against peaceful worshippers in Nice. While it is fairly easy to recognize the individual culprit behind such a violent event, it takes much introspection, let alone honesty, to identify the true culprits, who, often for political reasons, fan the flames of hate and violence.

Since his advent to the Elysée Palace, in May 2017, French President Emmanuel Macron has led an aggressive foreign policy abroad and an equally contentious domestic agenda. These choices were not random, as Macron was dogged by numerous domestic challenges: rising inequality and unemployment, mass protests led largely by the 'Gilets Jaunes' – Yellow Vests –  Movement and the unhindered rise of right-wing, anti-immigrant populist movements, such as the National Front (FN) of Marine Le Pen.

It is important that we recall the political atmosphere through which Macron was elected, for the man was meant to be the sensible choice propelled forward by the once-ruling Union for a Popular Movement (UMP).

The latter's candidate, François Fillon, failed to acquire the necessary votes to decisively win the elections on April 23, 2017. Instead, it was Macron, a relative political 'outsider' from the one-year-old En Marche (EM) Party that had the chance to stop the progress of Marine Le Pen's racist and chauvinistic FN. Indeed, Macron won the second runoff elections on May 7. His victory was decisive.

Judging by the mass protests that soon followed Macron's election, later exacerbated by the economic crisis that resulted from the COVID-19 pandemic (which, thus far, has killed over 36,000 people in France alone), Macron is no longer popular among his people.

With new elections scheduled for early 2022, Macron and France's ruling elites are quite nervous. The French economy is unlikely to recover anytime soon, not only because of the coronavirus pandemic – the destructive impact of which is expected to persist over the coming months and years – but also because, in the last three years, there has been no serious structural overhauling of the French economy with the stated aim of sting the pandemics of inequality, unemployment, racism, and political corruption.

As is often the case with inept leaders, Macron has invested in creating political distractions at home and abroad, manufacturing crises, and provoking unnecessary confrontations.

The French leader has seized on the opportunity presented to him as a result of the American retreat from various Mediterranean conflicts, namely Libya, Syria, Lebanon, and the East Mediterranean gas dispute. The shift in US foreign policy priorities, coupled with the British abandonment of the European Union – scheduled to go into full effect at the end of this year – led Macron to behave as if the de facto leader of Europe.

Racism in France is rife, and the electoral successes of the various right-wing nationalistic parties are a testament to this assertion. Instead of confronting this protracted disease which has afflicted the French body politic for far too long, Macron has labored to find some kind of a balance, where he continues to appeal to the liberal forces in his country without fully alienating the right-wing chauvinistic constituency. To achieve this delicate balance, Macron has opted for the most politically – and, to state bluntly,  cowardly –  convenient option: targeting France's most marginalized and impoverished French Arab and African communities in the name of fighting for the 'values' of the Republic against 'Islamic terrorism' and the dark forces that are lurking within his country. 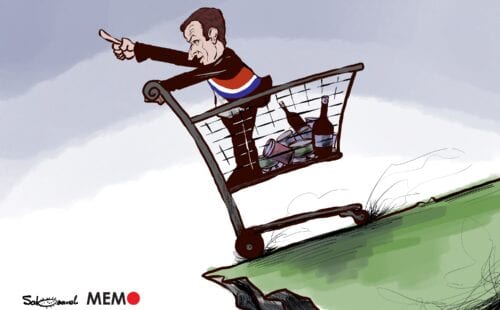 This is not to argue that domestic terrorism is not a major problem deserving attention and counter-strategies. However, judging by recurring statements made by French officials and media – which tend to demonize entire groups of mostly immigrant populations and their religious values – it seems as if the French government is leading a crusade of sorts against its own Muslim population. It appears as if Macron, himself, is leading a populist march against Islam and Muslims in France and elsewhere. This pathetic display of bad, opportunistic leadership was the true catalyst of today's crisis.

This brief timeline is sufficient to link Macron to France's latest violence:

On October 2, Macron assumed the role of the scholarly theologian lecturing his countrymen on Islam. "Islam is a religion which is experiencing a crisis today, all over the world," he said, laying out a plan to combat Islamic "separatism" in France. This provocative statement had an international dimension which, expectedly, raised the ire of Muslim governments and populations the world over. The domestic component of his comments was even more dangerous, as he practically declared French Muslims a fifth column, whose ultimate aim is to destabilize and to break up the French Republic.

More provocations followed, once more the berating of Islam and the mocking of Prophet Mohammed, African and Arab immigrants, and so on, in the name of French values, democracy, and freedom of expression. Judging by the bloody attack on the Charlie Hebdo's magazine in January 2015 and the violence and mosque burning of over 30 mosques in its wake (though the latter received little or no media attention), it should have taken no particular genius to deduce that the latest government-led provocations and anti-Muslim incitement were also doomed to result in violence and counter-violence.

Indeed, on October 16, a French teacher, who displayed images that mocked Prophet Mohammed, was reportedly killed by an 18-year-old Chechen Muslim refugee. The teacher was later declared a French hero and celebrated for his supposed sacrifice for French values. 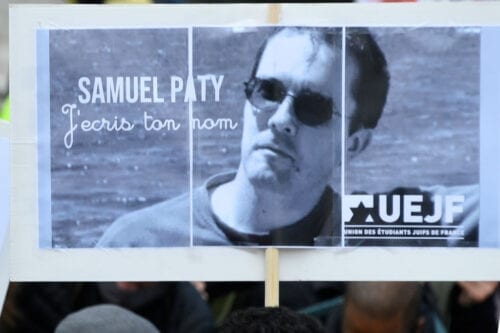 A person holds a placard with the portrait of history teacher Samuel Paty as people gather on Place de la Republique in Paris on October 18, 2020 [BERTRAND GUAY/AFP via Getty Images]

More mockery and insults of Islam and Muslims continued this time on a much larger scale. The anti-Muslim incitement was accompanied by acts of violence against French Muslims, particularly women. Again, this kind of violence received little attention in the international media and was hardly seen in France as an expression of a mass movement reflecting religious or nationalistic ideas.

With Turkey, Pakistan, and political movements representing every Muslim-majority country in the world jumping into the fray, Macron has managed to make himself the center of international attention as the indefatigable fighter for Western values and democratic ideals – with a subtle emphasis on being the champion of Christianity, as well.

The true crisis is not a crisis in Islam, but in French politics. If anyone deserves mockery, it is not Prophet Mohammed – whose message of nearly 1,500 years ago was that of peace, justice and equality – but, rather, Macron himself, who continues to distract from his unmitigated failure as a politician by pitting the French people, religious or otherwise, against each other. Hopefully, Charlie Hebdo will be satirizing that reality sometime soon.

OPINION: Macron uses freedom of speech as an excuse to insult Islam and Muslims, but it's not the reason