Palestine's contaminated vegetables: From farm to table, without regulation 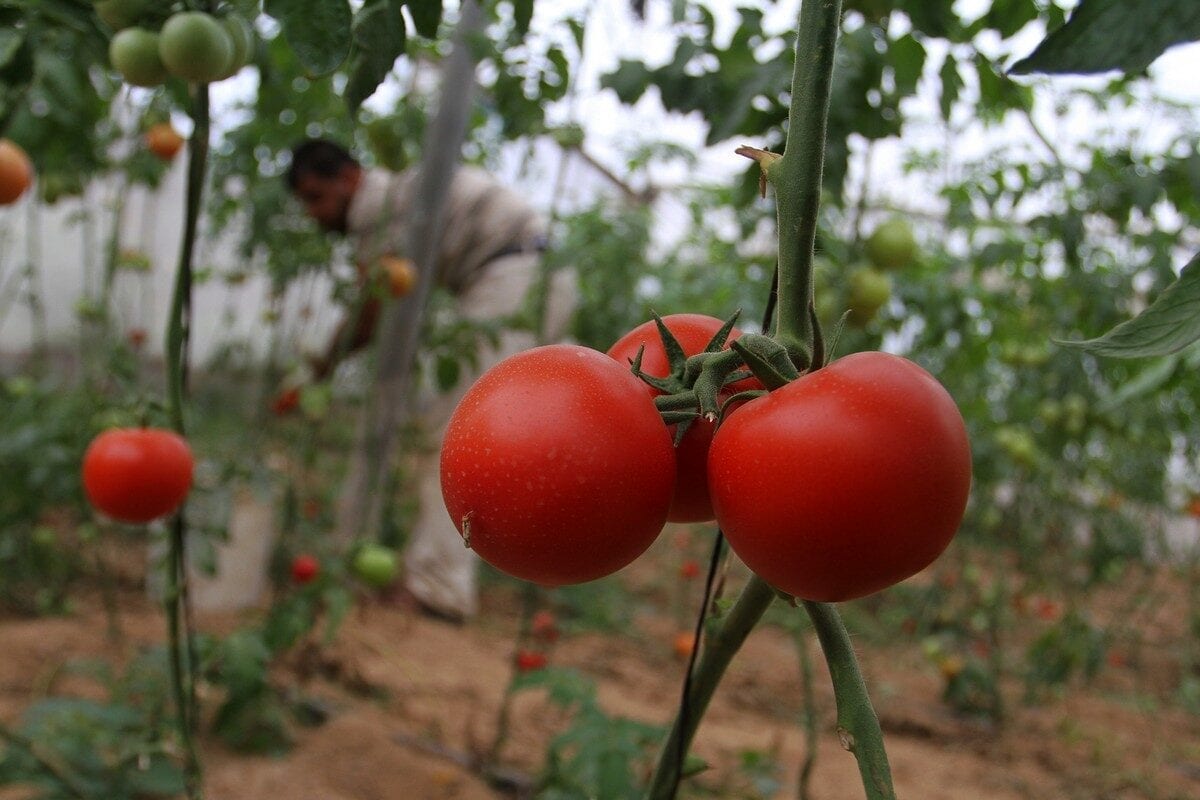 The bright, colourful vegetables of Palestinian markets conceal secrets that only laboratory equipment can uncover.

The secrets buried in the two main crops on the Palestinian table; tomatoes and bell peppers, began to unravel in 2017. That year, 20 samples of both crops were taken from West Bank cities for examination at the Laboratory Testing Centre at Birzeit University. At the time, the regulatory authorities promised to reform the agricultural pesticide sector and to develop a formula that would allow them to conduct periodic vegetable checks.

Three years later, nothing has really changed; not control procedures, nor the random use of pesticides. To confirm this, in early 2020, the ARIJ conducted another series of tests on eight samples of tomatoes and bell peppers from the northern, central and southern parts of the West Bank.

Test results showed no improvement in regulation. In fact, the situation had worsened. Over the course of three years, the investigation revealed that vegetables being sold to Palestinian consumers contained high levels of agricultural pesticide remnants. These levels violate the specifications and standards of Codex Alimentarius, issued by the Food and Agriculture Organisation (FOA) and the World Health Organisation (WHO), and can harm consumer health.

Palestine's vegetables: Away from censorship

One morning in December 2017, an ARIJ reporter travelled from Ramallah towards the Palestinian side of the Jordan Valley – also known as "Palestine's vegetable basket" as it produces 60 per cent of the country's total vegetable production. The warmer weather, fertile soil and abundant water resources due to its location on the country's main water basin, means the land can be cultivated throughout the year.

The Jordan Valley constitutes a quarter of the area of the West Bank. It has 50,000 citizens and produces 50% of the crops in the total agricultural areas and 60% of the total vegetable output. The area has 280,000 dunums of arable land, that is, 38.8% of the Valley's total area.

Muhammad Abu Al-Sheikh, 52, is a farmer from the village of Bardala. "I'm telling you, never in my life have I seen anyone from the Ministry of Agriculture on my land, not to provide any kind of guidance, nor to take samples for examination. Honestly… I have never seen them. I know that the Ministry of Agriculture must come to inspect the farm and monitor pesticides and their use. If the Ministry, which is the concerned party, does not care, how am I supposed to bother as a farmer? They should just take samples and check them. If there is anything wrong with them, they can hold me accountable," he told ARIJ.

Samih Khdeirat reaffirmed this. Standing in the middle of his farmland planted with bell peppers, he said: "No one from the Ministry of Agriculture has come for the purpose of inspection or guidance. Farmers use pesticides as they wish, and they count on their own personal experiences. For example, if we spray a pesticide that does not eliminate a specific disease, we increase the concentration of the pesticide to take care of it. "

According to farmers and vegetable market stall holders, regulations are non-existent.

"No one is watching. Never before has the Ministry of Agriculture or any other party taken samples for examination purposes," one vendor told ARIJ.

The majority of vendors we interviewed agreed that they are not responsible for the presence of any materials or residue on vegetables and fruits. They hold the Ministry of Agriculture responsible.

One of the vendors located in Al-Fara'a Market near the city of Tubas told ARIJ that "the Ministry of Agriculture is the one that should examine and guide farmers, you see. Cancer cases that are happening are all due to pesticides."

Fresh tomatoes picked at a farm in the West Bank, 3 November 2020

Greenhouses at a farm in the West Bank, 3 November 2020

Fresh tomatoes picked at a farm in the West Bank, 3 November 2020

"The Ministry of Agriculture is responsible, of course. The way it should be is that the Ministry follows up and monitors farmers, what they plant and what they put on the vegetables. I am a shop owner; I am not the state or the ministry to follow up on this matter," a stallholder in Hizma, north Jerusalem, said.

The laboratory results of the 29 samples of tomatoes and bell peppers that were taken from various cities in the West Bank showed that 72.4 per cent were contaminated, meaning they contained one or more types of pesticide residue. The results also revealed that 55.1 per cent included precipitates, meaning they contained residues of chemical pesticides that are higher than the maximum limit permitted internationally by the WHO.

Over 72% of the samples examined were contaminated

The percentage of samples in which pesticide residues were less than the permitted limits did not exceed 17.2 per cent, or just five samples. The percentage of completely clean samples that are free of pesticides was eight samples.

George Karzam is a researcher and environmental expert who also heads the Studies Unit at the MA'AN Development Centre. He believes the percentage of samples which are free from insecticide residues is very low.

"The most dangerous thing revealed by the results is that there are some insecticides that have been detected in the laboratory which are either banned internationally or in Palestine. For example, the insecticide known by its scientific name "Endosulfan Thionex" has been banned globally for many years, and residues of this pesticide have been detected in the samples. What's more, is that all the contaminated samples in particular contain a mixture of compounds, meaning that they contain more than one compound, in twos, threes or fours with the exception of one sample. This is extremely dangerous because it is clear that the motive for making the mixture of the chemical compounds and the active pesticide ingredients is to increase the extent of toxicity," he said.

Research was done on the methodologies followed in Palestine in determining permissible and prohibited pesticides. Immediately noticeable in the process was the chaos and lack of clear scientific methodologies. For example, the same pesticides once prohibited, are now allowed on the official lists adopted by the government. One example is the insecticide "MANCOZEB", on which Resolution No. 14 of 2011 was issued by the Minister of Agriculture, banning a group of pesticides by this scientific name and its active ingredients.

According to Karzam, the ban should be on the active ingredients and not on the brand names. For example, MANCOZEB was banned under its various brand names. However, this pesticide group became permissible after 2011 and despite the official ban. They appear on the list of agricultural pesticides permitted for use in the areas under the Palestinian Authority (PA)'s administration.

READ: Ramallah's Farmers' Market is taking a stand against annexation

Likewise, Chlorfenapyr, an insecticide also known by its trade name of "Berat", was banned under the same 2011 resolution. This pesticide was banned under its commercial name, and yet the official 2016-2017 list allows its use.

Karzam told ARIJ, that "sometimes the use of pesticides under their brand names is prohibited, but the use of the same active ingredients of these different pesticides is still permitted. This is an insult to people's intelligence. The principal action should be to define the scientific method on the basis of which to prevent or allow pesticides."

Responsibility for inspecting agricultural crops in fields and markets is shirked due to conflicts between the Ministries of Agriculture and Health. The Ministry of Agriculture has only 13 inspectors in the West Bank. Their role is limited to monitoring pesticide stores and following up on licensing and import processes, but does not cover monitoring agricultural goods after they leave the fields.

This means that the vegetables and fruits offered to Palestinian consumers are not subject to any kind of checks. Instead, they are taken from the fields to the market and then to the consumer without regulations, and this exposes people to diseases that manifest in the long run.

Spokesperson and Director of the Pesticides Department in the Ministry of Agriculture, Abdel-Jawad Sultan, says that the ministry's task ends in the fields. He assigns the role of inspecting and ensuring that agricultural crops are free of pesticide residues to the Ministry of Health.

"Vegetables are agricultural goods, and our responsibility ends after the crop leaves the farm. Herein lies the role of the Ministry of Health, which has the task of inspection since the powers to inspect markets are within its authorities," he told ARIJ.

Ibrahim Attia was the Director of Environmental Health until he passed away in March. He stressed that the responsibility of the Ministry of Health is limited to agricultural products that moved to the stages of processing and packaging. Examples include thyme after it is milled and tomatoes once they are cooked and turned into tomato paste.

While the Ministries of Health and Agriculture continue to disagree over who is responsible, the General Administration of the Consumer Protection Department in the Ministry of National Economy says the status quo does not achieve a state of market discipline in agricultural production. This is especially the case since there is a lack of clarity in the division of powers between the two authorities.

According to the Director of Consumer Protection, Ibrahim Al-Qadi, there is a Palestinian strategy for food safety that was prepared by the ministries of Health, Agriculture and Economy to control animal and agricultural products.

It added that the responsibility of the Ministry of Agriculture extends from the farm to the market – from farmer to consumer. According to the Director of Consumer Protection Department, Ibrahim Al-Qadi, what is missing is an agreement between the ministries.

Dr. Aqil Abu-Qare', a researcher in the field of pesticides, was horrified by the chemical pollutants found in the tomatoes and bell peppers examined, especially as some contain pesticides which are banned in Palestine. But what worried him more, was the presence of more than one pesticide in each sample, leading to an increase in toxicity.

"There are short-term harms such as immediate toxicity as a result of which symptoms such as nausea appear. If the concentration is high, it may lead to paralysis or to death."

"The consequences of the exposure of the human body to small quantities begin to appear over time, and these cause great risks," he adds, "The most significant of these is cancer, which is the second cause of death in Palestine."

The World Health Organisation warns of the same, saying: "Pesticides are among the leading causes of death due to self-poisoning, especially in low- and middle-income countries."

"Since pesticides are toxic by nature and spread slowly in the environment, their production, distribution and use require tight regulation and control. Also necessary is the regular monitoring of pesticide residues in foods and in the environment."

"Handling large amounts of pesticides may cause severe poisoning or long-term health effects, including cancers and adverse effects on reproduction."

The use of pesticides in Palestine is not only negatively affecting consumers, but famers and market stall holders may be putting themselves at risk as they continue to be exposed to these harmful and potentially deadly chemicals. Continued chaos on the ministerial level means little will change in the near future.