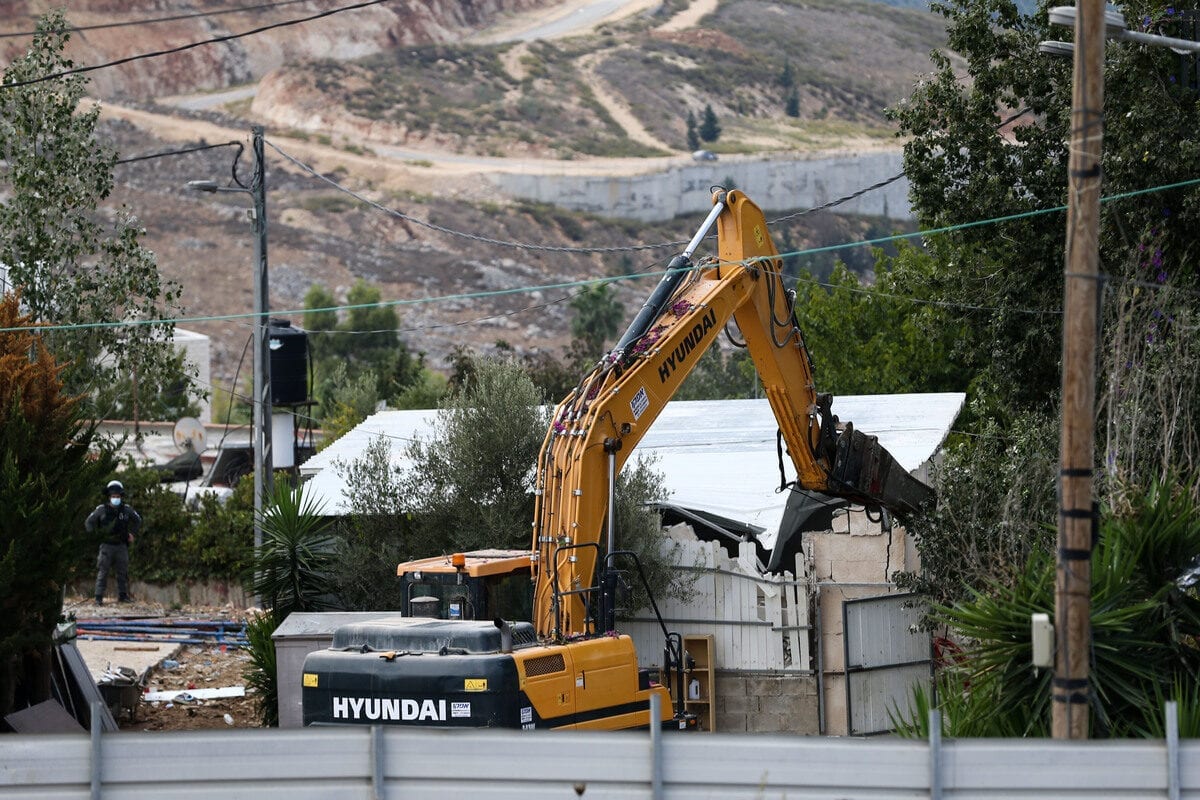 Heavy duty machines of Jerusalem Municipality demolish a house accompanied by Israeli security forces with the order of Israeli authorities claiming that the house, which belong to a Palestinian family, was unlicensed in East Jerusalem on November 03, 2020 [Mostafa Alkharouf - Anadolu Agency]
Yousef Al-Helou
YousefAlhelou
November 9, 2020 at 11:02 am

Last week, Israeli occupation forces carried out the largest demolition in years in the occupied West Bank. Some 76 Palestinian-owned properties, tents, sheds, structures and animal fodder were destroyed in the occupied Jordan Valley village of Khirbet Humsa. Almost 80 people, including 41 children, were displaced as winter approaches in the middle of the Covid-19 pandemic.

What happened to this community is de facto annexation facilitated under Donald Trump's "deal of the century". It is also a consequence of the normalisation deals between Israel and the UAE, Bahrain and Sudan, which have emboldened the occupation state.

The Bedouin and herding committees in the Jordan Valley and Jerusalem areas are the main target of such demolitions and subsequent expulsion from their land. Since the beginning of this year, 689 structures, properties and animal shelters have been bulldozed and destroyed by the Israelis. This year has seen the most demolition of Palestinian-owned property since 2016. It's a cruel, racist and inhumane policy through which Israel wants to drive Palestinians off their land. The Zionist state is greedy for more land for illegal settlements and military bases, and so the ethnic cleansing which began in earnest in 1948 to force the indigenous population off the land continues unabated.

Condemnations of Israel's actions, while appreciated, actually mean little as far as the Palestinians are concerned. They know that they do not deter the occupation state from doing what it wants in the absence of any sense of accountability. It has ignored UN Resolutions for years, so why should Israel's impunity be threatened by a statement from the UN Secretary General's spokesman? Such is the level of the double standards at play in the international community that Israel can, literally, get away with murder.

READ: Does Biden come bearing gifts for the Palestinians?

According to the United Nations, Israel has demolished more than 55,000 Palestinian homes, dwellings and other structures since 1967. This figure does not include the destruction caused by the Zionist state's military offensives against civilians in the Gaza Strip. Such demolitions are, the UN points out, a "grave breach" of international law.

"I remind all parties that the extensive destruction of property and the forcible transfer of protected people in an occupied territory are grave breaches of the 4th Geneva Convention," said Yvonne Helle, the Humanitarian Coordinator ad interim for the occupied territory at the UN Office for the Coordination of Humanitarian Affairs (OCHA). "The humanitarian community stands ready to support all those who have been displaced or otherwise affected."

The Israeli Information Centre for Human Rights in the Occupied Territories, B'Tselem, tweeted that, "While you were eagerly following the US elections, Israel has demolished an entire community's residential compound, leaving 74 people, 41 of them minors, homeless." This was echoed in a message from Palestinian Authority Prime Minister Mohammad Shtayyeh.

Despite Benjamin Netanyahu's cosy words of congratulations for US President-elect Joe Biden, "a great friend of Israel", it is my belief that the Israeli Prime Minister is racing to destroy as many Palestinian properties as possible while the man responsible for "bringing the American-Israeli alliance to unprecedented heights", Donald Trump, is still in office. Yet more despicable and illegal facts on the ground are being established, just in case Biden decides to change US foreign policy in the region. Coming so soon after the normalisation deals, Netanyahu knows that the green light for more illegal activity may soon change to amber, but probably not red.

As is often the case, Israel has ready-made justifications whenever it displays its open contempt for international law. In the latest demolition case, the Israeli military body in charge of civilian affairs in the West Bank claimed that the "enforcement activity" was carried out against seven tents and eight pens that were "illegally constructed" in a firing range. Do such dwellings and sheds pose a threat to Israel's security? And why was a firing range sited where indigenous people have been living and grazing their animals for centuries? It's yet another excuse to drive the people off their land.

Joe Biden is apparently opposed to Israel's planned annexation of large swathes of the West Bank. It remains to be seen if he will defend Palestinian rights when he enters the White House in January, and put an end to Israel's ability to act with impunity.