Lebanon and its embezzled state funds are a major issue 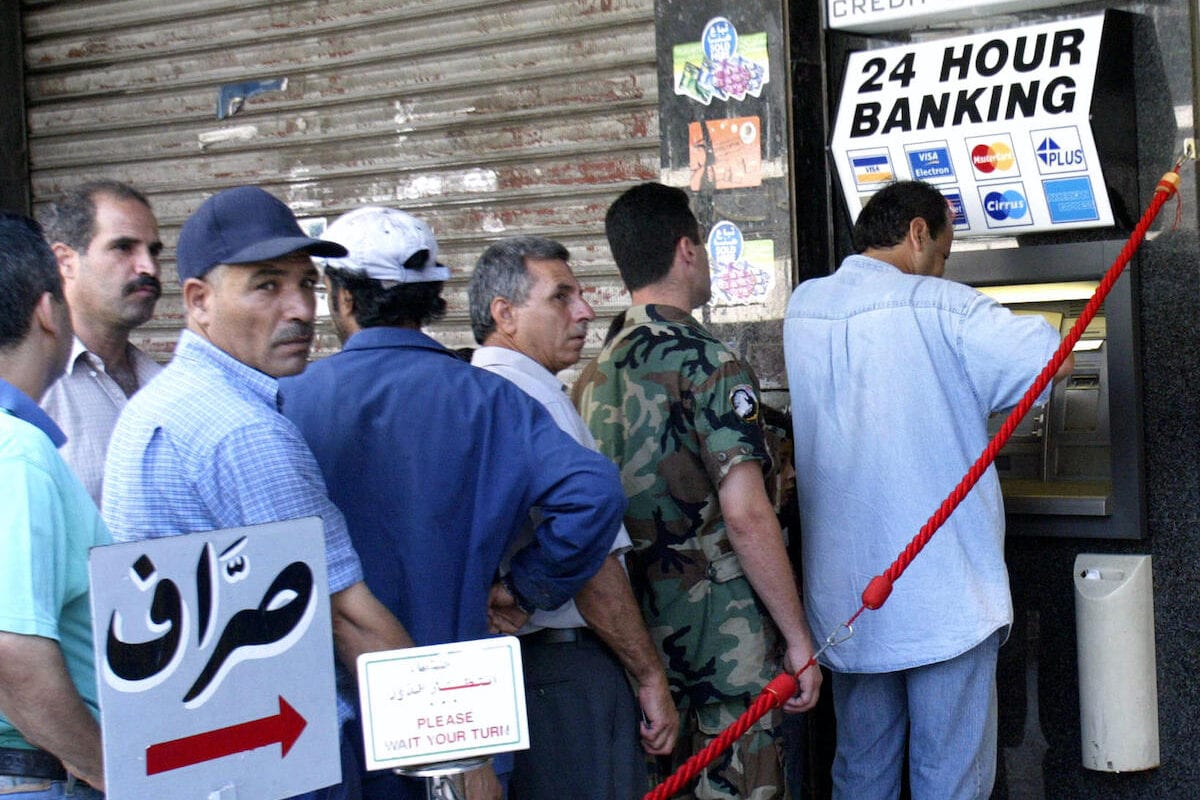 Lebanese men stand in line in front of an ATM machine waiting for their turn to withdraw some money in Sidon, Lebanon, 24 July 2006 [MAHMOUD ZAYAT/AFP via Getty Images]
Adnan Karima
November 9, 2020 at 8:12 pm

More than a year has passed since the start of the popular protests in Lebanon demanding an end to the waste of public funds and corruption, as well as calling for embezzled funds to be recovered by the state treasury. During this time, the value of the national currency has fallen through the floor in the face of government procrastination and smuggled foreign currencies, especially US dollars.

Despite this, there is still no accurate and transparent information about how much was embezzled and where the funds have been deposited. According to estimates circulating on social media, $320 billion of Lebanon's money has been lost and is believed to be in Swiss bank accounts. The list of 100,000 bank accounts in the Swiss branch of HSBC which has been leaked claims that more than $5.8 billion is held in the accounts of its Lebanese customers. That's just one bank.

We must bear in mind that there are still undeclared funds and investments in Switzerland, taking advantage of the banking secrecy laws in the country and estimated at over a trillion dollars. Most of this money arises from what are believed to be illegal investments. Some depositors have died and their heirs are able to obtain the funds.

The people involved in this level of embezzlement have to avoid the stringent anti-money laundering laws and procedures now in place. To do this they keep large amounts of cash outside the banking system, invest in jewellery and gold, establish fake companies and buy property in the names of relatives or close associates. Governments are either unable or unwilling to track stolen money, regardless of the UN Convention against Corruption.

The smuggling and transfer of embezzled funds still occupies a lot of time in political discourse in Lebanon. Banque Du Liban Circular No. 154 was issued in this context. It asks banks to "urge any customer who has transferred abroad, between 1 July 2017 and the issuance date of this Decision, more than five hundred thousand dollars or their equivalent in other foreign currencies, to deposit in a 5-year term 'special account' an amount equivalent to 15 per cent of the transferred value." This, it is hoped, will lead to an influx of billions of dollars, helping to float the state treasury that has been bankrupted by financial policies.

It is worth noting that the transfers referred to in the bank's circular are not considered to be a violation of the law, and therefore their owners cannot be accused of or prosecuted for a crime they did not commit. Some may sue the Banque Du Liban and banks abroad if the protocols of banking secrecy are breached. Hence, the circular "urges" banks' clients to act, meaning that the decision is up to them, there is no compulsion or obligation.

Based on statistics from the Association of Banks in Lebanon, it appears that the funds that left the country during the period specified by the circular amount to $3.564 billion, more than 80 per cent of which is now employed in five financial markets: Switzerland, France, Luxembourg, Britain, and the United States.

According to the Bank for International Settlements, the Banque Du Liban has net reserves with banks around the world amounting to about $14.711 billion. If the commitments of commercial banks, amounting to $3.2 billion, are added to it, it will have $17.911 billion.

Calculating the application of the circular (in the event that clients respond positively), the association expects to return only $521 million, at most. This is a very small amount, contrary to what some politicians expect will be enough to satisfy the international community.