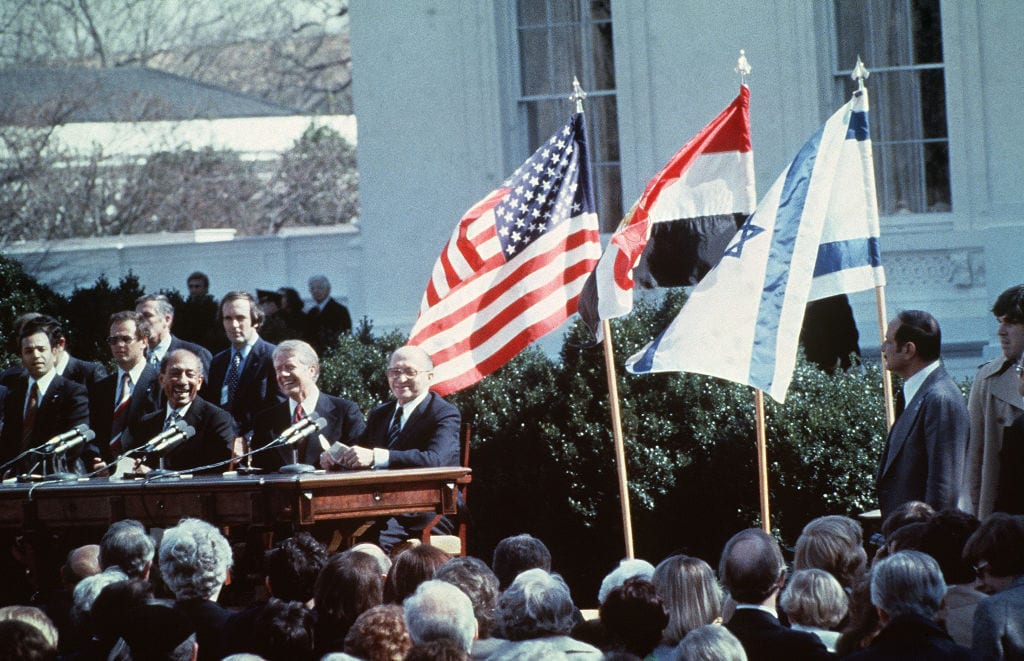 Upon leaving office, US Presidents have, on occasion, mustered the courage to speak their mind about America's relationship with Israel and the influence of the Zionist lobby in Washington. Jimmy Carter is perhaps best known for this. The 39th President of the USA, despite his role in mediating the 1979 Camp David Accords between Egypt and Israel, was denounced as an anti-Semite following the publication of his 2006 book, Palestine: Peace Not Apartheid, which went on to become a New York Times bestseller.

After a fierce backlash, Carter explained why it was so difficult for US politicians to discuss America's relationship with Israel and the policies of the Zionist state in an honest fashion. "It would be almost politically suicidal for members of Congress to espouse a balanced position between Israel and Palestine," he wrote in the Guardian at the time. "Very few would deign to visit the Palestinian cities of Ramallah, Nablus, Hebron, Gaza City or Bethlehem and talk to the beleaguered residents." He urged his fellow Americans to know the facts about the "abominable oppression of the Palestinians."

The ultimate purpose of his book, said Carter, was to present facts about the Middle East that are largely unknown in America, to precipitate discussion and help restart peace talks that can lead to permanent peace for Israel and its neighbours. "Another hope is that Jews and other Americans who share this goal might be motivated to express their views, even publicly, and perhaps in concert."

While Carter's book has not had the desired impact on members of US Congress, presumably because a balanced debate would, as he said, be "political suicide", his second goal of precipitating honest discussion amongst various American communities was given a huge boost. Arriving as it did a year after the launch of the Boycott, Divestment and Sanctions (BDS) campaign, Palestine: Peace Not Apartheid normalised the framing of Israel's brutal occupation with the former apartheid regime in white-ruled South Africa.

A year after Carter's book, American academics John Mearsheimer and Stephen Walt shed further light on the concerns raised by the former US President in their book, The Israel Lobby and US Foreign Policy. Mearsheimer and Walt set out to answer a very fundamental question: "Why has the US been willing to set aside its own security and that of many of its allies in order to advance the interests of another state?"

"One might assume that the bond between the two countries [US and Israel] was based on shared strategic interests or compelling moral imperatives," they suggested, before explaining that, "Neither explanation can account for the remarkable level of material and diplomatic support that the US provides" to the Zionist state.

READ: AIPAC is in a losing battle to preserve Israel's bipartisan status in America

It was the activities of the "Israel Lobby," argued Mearsheimer and Walt, that had successfully manged to "skew" US foreign policy and "to divert it as far from what the national interest would suggest, while simultaneously convincing Americans that US interests and those of the other country — in this case, Israel — are essentially identical."

In the 13 years since the publication of their seminal work, there have been desperate attempts to silence US lawmakers. Such attempts highlight the influence of anti-Palestinian groups like the American Israel Public Affairs Committee (AIPAC) in having critics of Israel discredited by accusations of "anti-Semitism". Democrat Representative in Congress Ilhan Omar is the most recent victim of such a campaign.

Despite efforts to silence the likes of Omar, concerns raised by Carter, Mearsheimer and Walt about the pro-Israel lobby remain a source of anxiety for US Presidents and officials alike. Following in Jimmy Carter's footsteps, Barack Obama has also warned against the undue influence of the pro-Israel lobby and the weaponisation of anti-Semitism to silence critics of the Zionist state. In his upcoming memoir, A Promised Land, Obama appears to acknowledge that there are political costs to criticising Israel and that supporters of the occupation state in America use accusations of anti-Semitism to stifle criticism of the Israeli government's policies against Palestinians.

According to excerpts published by Jewish Insider, Obama wrote that American politicians who "criticised Israel policy too loudly risked being tagged as 'anti-Israel' (and possibly anti-Semitic) and [were] confronted with a well-funded opponent in the next election."

Obama also hit out AIPAC, saying that the powerful anti-Palestinian group moved to the right ideologically to mirror Israeli Prime Minister Benjamin Netanyahu's government and defended Israel even when its actions "were contrary to US policy". This is the exact conclusion made by Mearsheimer and Walt in their book, for which the academics were condemned as anti-Semitic. The former president also revealed that he faced problems within his own party when criticising Israel settlement activity.

Obama isn't the only one who has warned against the Israel lobby. Pentagon senior adviser Colonel Douglas Macgregor accused US Secretary of State Mike Pompeo and other senior politicians of taking money and getting rich from "the Israeli lobby." It is worth nothing that while Ilhan Omar rattled the entire US establishment by making exactly the same remark, there has been a wall of silence following the retired colonel's comment.

Macgregor, who has just been appointed as a senior adviser to America's newly-installed Acting Defence Secretary, is reported to have made the comments in two media appearances in 2012 and 2019. His apparent suggestion that foreign powers were influencing the US to act against its own interest, only came to light last week.

"You have to look at the people who donate to those individuals," Macgregor is reported saying to CNN during a September 2019 interview when asked if the then National Security Adviser John Bolton and Republican Senator Lindsey Graham wanted war with Iran. "Mr Bolton has become very, very rich and is in the position he's in because of his unconditional support for the Israeli lobby. He is their man on the ground, in the White House. The same thing is largely true for Mr Pompeo, he has aspirations to be president He has his hands out for money from the Israeli lobby, the Saudis and others."

The time has surely come for the people of America to demand more of their elected representatives and those appointed to run their country. As Jimmy Carter said, American citizens need to know the facts about the "abominable oppression of the Palestinians" and end successive governments' slavish loyalty to a foreign state.