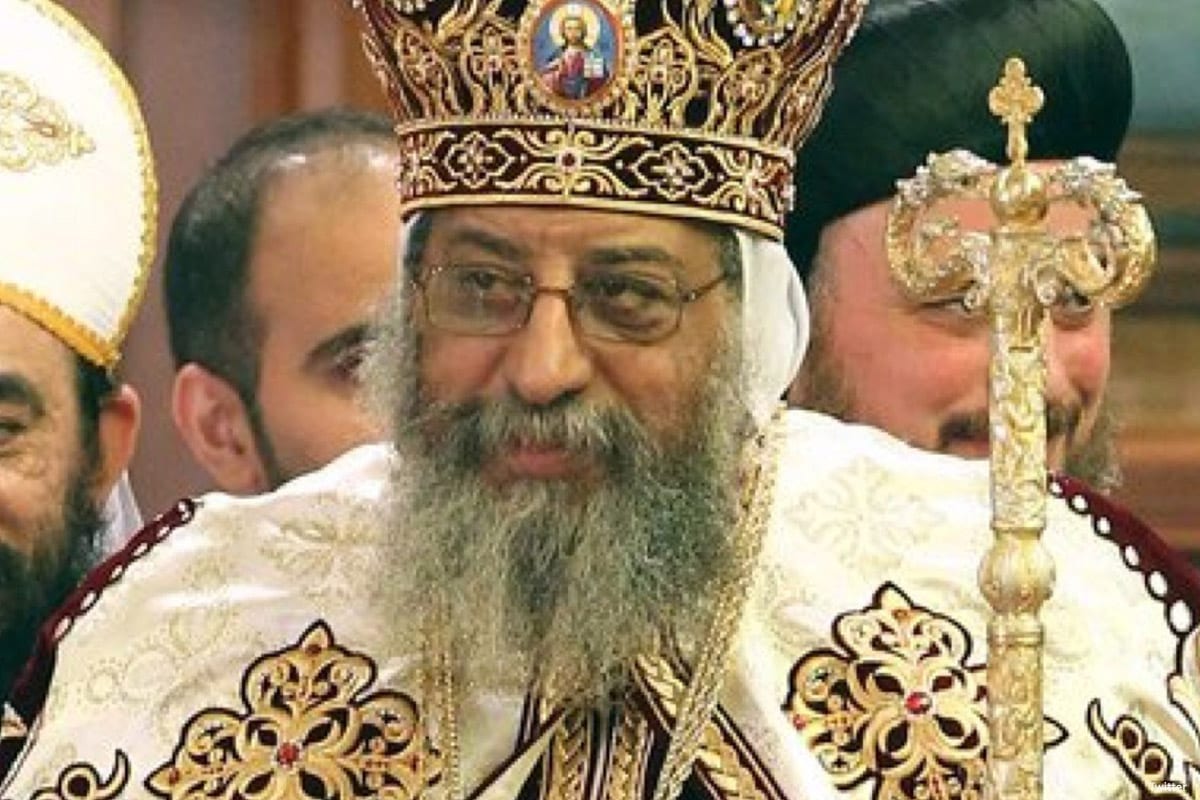 When Shenouda became Pope of the Coptic Church in 1971 there were only two Coptic churches in the US – one in New York and one in Los Angeles. When he died in 2012 there were 202 churches. Today there are 250.

"That tells you something about the wave, the tsunami of immigration that is taking place and it's not just the United States," Samuel Tadros, senior fellow at the Hudson Institute's Centre for Religious Freedom, a think tank based in Washington DC, tells me. "This church today has over 650 churches all across the world – that's about a third, or even more than a third of the number of churches you have inside Egypt."

One of the most publicised threats against Egypt's Christian community are the attacks carried out by Wilayat Sinai, Egypt's Daesh affiliate, which have forced hundreds of Copts to flee from northern Sinai. On Palm Sunday over 40 were killed when twin bomb attacks hit St. George's church in Tanta on the Nile Delta and St. Mark's in Alexandria, the seat of the Coptic papacy.

Funeral ceremony is held at Church of the Virgin Mary for the victims of the explosion at Saint Peter and Saint Paul Coptic Orthodox Church in Cairo, Egypt on 12 December, 2016 [File photo]

Whilst the bombings are horrific, many agree that Daesh is not the main threat. Copts in Egypt are discriminated against by society at large who make it difficult for them to find jobs or even join football teams. There is not a single governor in the country or a dean of a university or school who is a Christian, explains Tadros; nor is there a Christian in the intelligence service or state security. There is a one per cent cap on Christians in the army and a two per cent limit in the foreign services and the judiciary.

Christian history isn't even on the syllabus. "At school you follow the Pharaohs, Alexander the Great, the Romans, then there's a 300-year gap where nothing happened until the Arab armies arrived," says Tadros.

In the countryside, especially in the south of the country, mob attacks take place on a regular basis. It begins with a rumour of Christians attempting to build a church, of a sexual relationship between a Christian man and a Muslim woman, or of a Christian insulting the prophet. It ends with the looting and burning of people's homes.

Authorities are doing nowhere near enough to protect Egypt's Christians, whose predicament is now worse than under previous governments. They are often warned ahead of attacks by the local community but no protection is offered. Instead, both Christians and Muslims are arrested and forced into reconciliation sessions before being released without charge.

The government should just end these reconciliation sessions and instead of making token appearances at Coptic cathedrals during Christmas simply apply the law equally. It's not as if Copts in Egypt are asking for something special – they want legal protection as legal citizens. If someone burns a home they should be brought to trial it's as simple as that.

Neven Melek, an Egyptian human rights lawyer and founding member of Christians Against the Coup, fled Egypt after she faced a sentence of hard labour for charges filed against her. On this point she agrees:

Absence of accountability and the impunity of perpetrators is one of many reasons for the absence of justice and the loss of hope, which make a large number of young people prone to reflexive and violent thinking.

The state needs to follow the rule of law and the minority and the majority be granted equal rights, she says: "We need a democracy not a dictatorship."

Melek says that working in the field of human rights in Egypt is like working in a conflict zone. "Authorities have effectively banned protests and freedom of expression, imprisoned its opponents – usually after unfair trials – outlawed the Muslim Brotherhood and expanded its anti-terrorism powers," says Melek.

In my opinion the current policies are giving rise to extremism.

Since the 2013 coup, the Coptic Church sees President Abdel Fattah Al-Sisi as the right person to fight terrorism. "In fact terrorism is not a top priority for Mr Sisi and his supporters," says Melek. "Mr Sisi's puppet parliament is focusing on fortifying the authorities from criticism and legislating laws that allow him to remain in power and criminalise the right to criticise. A state of emergency is not a solution to the situation of Copts in Egypt. A state of emergency was not a solution under Mubarak's rule and will not be under Sisi's rule."

"The Church and the Pope Tawadros should respond with courage and direct criticism to those responsible for the lack of security in the protection of churches and Christians," she adds.

In Egypt discrimination by society and the government is largely not acknowledged. "Everyone has their favourite story about the great Coptic neighbour he had and how they lived together and things were fine," says Tadros. "Well it is not fine. It's very obvious that Egypt has serious problems."

On the day of the Palm Sunday bombings a female police officer was assigned to St. Mark's Cathedral in Alexandria to check women's bags as they entered the church. She died in the attack and was hailed a hero.


Her nephew was later invited onto an Egyptian TV channel to talk about his aunt and revealed that several days before the bombing, when she discovered she would be stationed at the cathedral, she had tried to excuse herself from the posting. When she couldn't she asked whether God would accept her as a martyr in heaven if she died protecting Christians.

"I don't want to attack the woman, she died doing her job, but at the end of the day if the very someone who is assigned to protect the churches has his own doubts about doing that, views Christians as essentially unbelievers and has problems with protecting them then it's no surprise that this society will produce men that joined the Islamic State [Daesh]," says Tadros.

Whilst Christians face persecution at home, abroad there is little interest in their plight. "Of course when you have a big bomb you get the press, the condemnations from the White House or from the British government and so on. But the plight of Middle Eastern Christians is often just ignored."

"They are too Christian to excite the left and too alien to interest the right and thus they fall into this blind spot," says Tadros. Theoretically the persecution of Middle Eastern Christians fits the narrative of the religious right – "the narrative of the Islamophobes" – says Tadros, but instead their reaction is more, "yeah sure they were killed, but they're not even Christians."

We look odd in Western eyes, with our Popes, our patriarchs, wearing these odd clothes and our rites and the way we pray.

Particularly on the left, Christians are perceived to be the persecutors, as they were during the Reconquista in the Iberian Peninsular when Christian armies recaptured territory from Muslim Moors in the early eighth century. "The very idea of Christianity being the persecuted religion doesn't make sense in the Western mindset," says Tadros.

Despite the danger their people are in Christian leaders often call on their communities to stay in the region. "One fear is that if these people go to the West they might lose them permanently, meaning that either they will be impacted by the Western atheist trend as these patriarchs understand it, or that they might join another denomination," explains Tadros. "So there's this sense that you're going to lose everything unique about you, your whole tradition and rites and all of that." 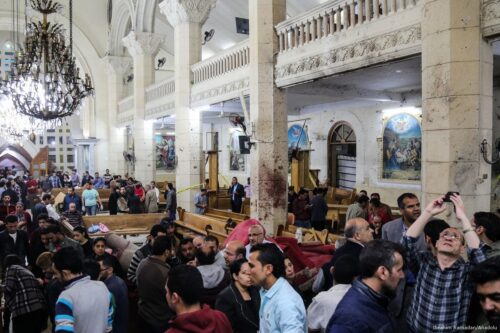 People are seen at the damaged Saint George church after a bombing struck inside the church in Egypt on April 9, 2017. (İbrahim Ramadan/Anadolu Agency)

"In reality it's a huge demographic shift. This region throughout the centuries had this rich mosaic of religious and ethnic minorities – Christian, Muslims, Druze, the heterodox sects in Islam, the Alawites, the other religions, the Yazidis, the Mandaeans, the ethnic groups, the Kurds – the loss of that rich mosaic is something very sad for these countries and has huge implications because often these minorities played an important role as the link between the West and the region."
"On the rivers of Babylon there we sat and wept as we remembered Zion," says Tadros, quoting Psalm 137:1 from the Bible, in which the Israelites mourn being exiled by the Babylonians.

It's such a depressing thought. Losing your homeland, your motherland, your history, everything that bonds you to this place. However, the question I ask myself – and I have to be honest with myself – am I willing to look a Copt in the eye, a Coptic father or mother, and tell him or her it's fine to stay in Egypt? I'm not willing to do that. And if I'm not willing to do that then I should stop pretending that they all should stay.