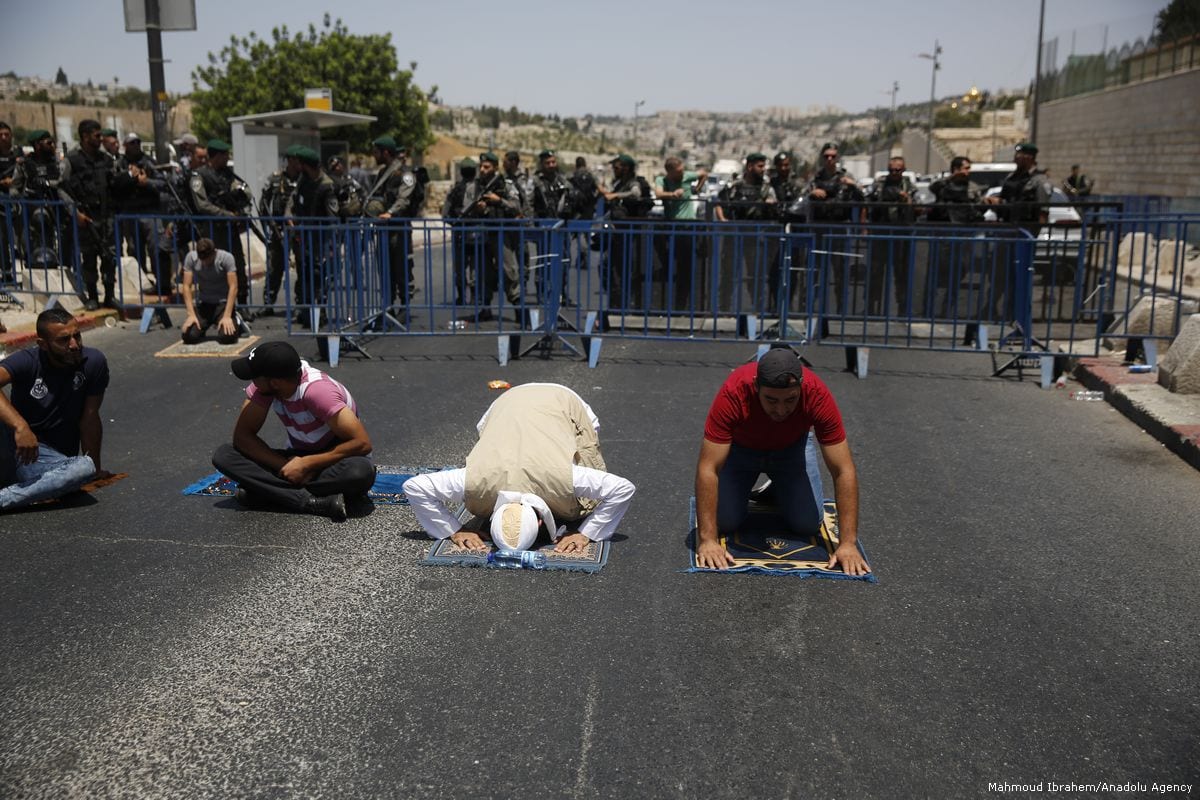 Palestinian Muslims gather to perform Friday Prayer at one of the entrances of Al-Aqsa Mosque Compound in Jerusalem, on 28 July 2017 [Mahmoud Ibrahem/Anadolu Agency] 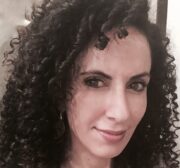 After closing the sanctuary to Palestinians for Friday prayers, the Israeli security cabinet erected metal detectors and surveillance cameras at its gates. Mass protests followed, with worshippers praying defiantly outside the compound and Israelis using violence and mass arrests, ironically to calm the situation. The protesting Palestinians and Israeli violence left another five Palestinians dead and hundreds more injured.

Despite the outbreak of escalated violence, it is imprudent to look at the latest events in Jerusalem in isolation. Palestinians have confronted the Israeli security apparatus in recent weeks in response to one of Israel's countless deliberate measures to prevent Palestinian freedom of access to the Noble Sanctuary compound. These actions were committed amidst a highly emotional and sensitive atmosphere created by the constant calls of Jewish religious leaders to demolish the mosques located within the compound — notably Al-Aqsa Mosque and the Dome of the Rock Mosque — and replace them with a Jewish Temple. The provocative threats to demolish the Muslim holy sites are based on the claim that the Noble Sanctuary is built on the ruins of the First and Second Jewish Temples, something that continues to lack verification by independent archaeological evidence.

Jerusalem may be considered the epicentre of Israel's intentions for complete dominance and removal of the Palestinians. However, the creation of the state of Israel in 1948 on Palestinian land and against the will of its inhabitants has led to a cyclical struggle between the coloniser and the colonised throughout Mandate-era Palestine. The forced displacement of over three-quarters of the indigenous Palestinian population in 1948 and their replacement by Jewish immigrants did not stop there. The "remove and replace" policy of the Zionists pre-1948 and Israel post-1948 took place across the entire territory by a carefully planned system of forced displacement, zoning regulations and unjust and discriminatory laws. Jerusalem, moreover, has its own unique history of colonialism and apartheid.

Decades before last week's deadly violence in the city, Israel's 1948 settler-colonial ambitions forcibly removed approximately 80,000 Palestinians — roughly half of the Palestinian residents — in what was to become West Jerusalem. East Jerusalem, including the Old City, came under Jordanian rule after the 1949 Armistice until Israel occupied and annexed the whole city following the 1967 war. Despite East Jerusalem's majority Palestinian population, Israel officially declared a "Unified Jerusalem" to be its "Jewish capital". This acquisition of land by force was condemned by the UN Security Council in Resolution 478 (1980) and violates dozens of other international humanitarian and human rights laws.

Today, West Jerusalem is a vibrant tourist site with lavish restaurants and bars, abundant infrastructure and people walking around freely without being stopped and harassed arbitrarily. Juxtaposed against the Western side of the city, East Jerusalem, especially the Old City, is run down because of restrictions on restoring ancient buildings, and it suffers from the near-total abandonment of basic municipal services such as rubbish collection and law enforcement. The Palestinian-owned gift shops and produce markets in the Old City have only a trickle of customers. The socio-economic disparities between the two sides are palpable.

In 1993, the Oslo Accords granted the newly-created Palestinian Authority (PA) limited self-rule, which was supposed to include East Jerusalem. The PA, though, was prevented from governing there. Instead, Israel granted Palestinians unconscionably restrictive permanent residency permits that are under constant threat of arbitrary revocation through a complex network of laws covering such things as marrying someone from the West Bank or travelling abroad for more than three years.

The "centre of life" policy subjects Palestinian residents of Jerusalem to unannounced invasive home inspections to prove that they are still residing in their homes within Jerusalem's municipal boundaries. This draconian scheme has demoted Palestinians who have lived in their ancestral home in Jerusalem for centuries to mere foreign immigrants stripped of their Palestinian nationality. Since the 1967 occupation, Israel has revoked more than 14,000 residency permits from Palestinians in Jerusalem. This number is taken from a 2013 study, and has most likely increased since then.

Without the protection of the PA, which itself does not have real sovereignty over the territories it ostensibly rules, the Palestinians of Jerusalem are at the mercy of Israeli governance. Official and unofficial policies aim to reduce the Palestinian population and increase the Jewish population and maintain a ratio of 30 per cent Palestinians to 70 per cent Jews. In furtherance of this demographic engineering, Israel has passed a multitude of laws and policies that discriminate against the Palestinians in favour of Jewish settlers without regard for the fact that the latter have migrated from another country.

Despite paying the same taxes as Jews, Palestinians with permanent residency in Jerusalem cannot vote in Israeli elections; are subject to separate building and permit regulations; and are provided with inferior municipal education and health services. The building permit system is especially alarming; the consequence of building without a permit, which is necessary for growing Palestinian families but nearly impossible to obtain from the Israeli authorities, is a home demolition order. Since 1967, over 1,600 homes have been demolished in this way, leaving thousands of Palestinians homeless without any legal recourse. This comprehensive set of policies and laws is choking the Palestinians and reducing their numbers in the city. 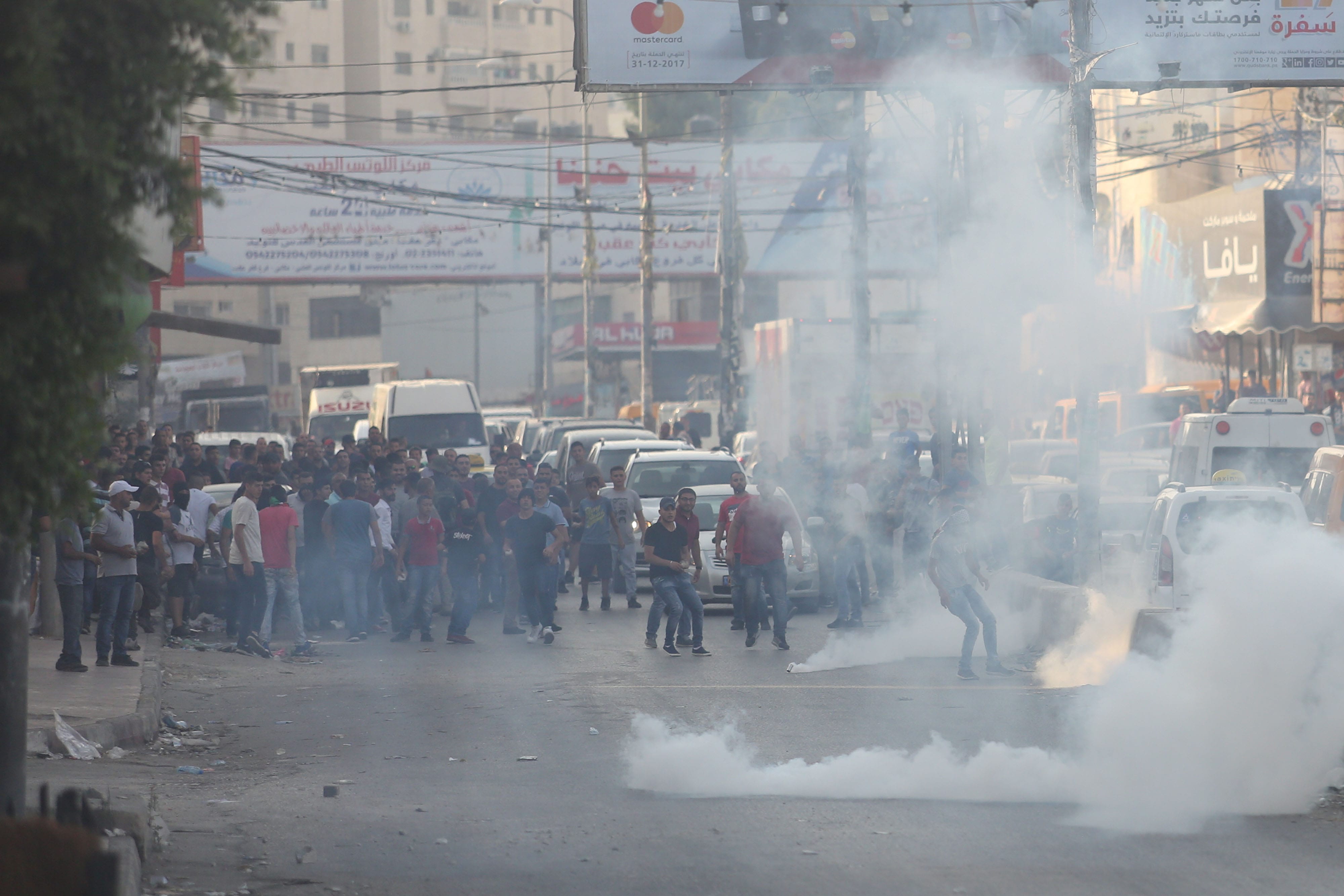 Like the US practice of gerrymandering, deliberate urban planning has expelled Palestinians from the Jerusalem municipality while facilitating Jewish settlement expansion. Fifteen Israeli settlements have been built in and around the shrinking Palestinian population in Jerusalem; meanwhile, Palestinians are routinely denied building permits and suffer from a severe housing shortage.

The unfathomable living conditions and insecurity felt by the Palestinians of Jerusalem brings them together to protect their connection to the city by any means possible. The recent massive convergence of people to protest against Israel's invasive measures under the guise of security proves that there remains a fire inside every Palestinian facing Israeli aggression.

The Israeli security cabinet decided to remove the metal detectors from the Noble Sanctuary compound most likely due to its inability to quell the civil protests. The Palestinian resistance, resilience and dedication to defend their right to freedom of access to their places of worship forced Israel to change course in this latest confrontation, but Israeli officials have already devised alternative plans.

While Palestinians cheered and celebrated this triumph (and continued to be met with further Israeli violence), Israeli officials have devised and are implementing alternative measures expected to pass under the radar. One of these is the replacement of the offensive metal detectors with advanced security technology, including facial identification software, which is expected to cost several hundred million shekels. This indicates that the cameras installed alongside the metal detectors will remain in place, since facial recognition technology requires cameras. The cabinet is also expected to increase the police presence in the Old City, especially around the Noble Sanctuary, which is likely to lead to continued violence given the free rein given to police and soldiers to use deadly force against Palestinians.

Read: UN warns of escalation if no Al-Aqsa solution by Friday

The legislation would remove Shoafat Refugee Camp and the village of Kufr Aqab, which are currently within Jerusalem's municipal borders but are separated by the Apartheid Wall on the West Bank side. In other words, Jerusalem's Palestinian population would be reduced by 100,000 at a stroke. Parallel to this, a second "Greater Jerusalem Bill" would annex five Israeli Jewish settlements to the city's municipality: Gush Etzion, Efrat, Betar Illit, Givat Ze'ev and Ma'aleh Adumim would thus increase Jerusalem's Jewish population by 150,000. The bills are expected to be brought to the Ministerial Committee for Legislation for a vote when the Knesset reconvenes in October.

Such underhand measures by the Israelis are far more urgent and dangerous than the controversial metal detectors. The consequence of this new legislation would once again and very ominously change the demographic character of Jerusalem by reducing the number of Palestinians drastically and increasing its Jewish population. For Palestinian Jerusalemites, this means the mass revocation of their residency rights. This flagrant and outrageous move in a single meeting of the Knesset would surpass numerically the thousands of Palestinian Jerusalemites displaced forcibly over 70 years.

The reprehensible Israeli programme of "remove and replace" is not new and is not limited to Jerusalem. It is a continuation of a settler-colonial plan to remove the indigenous Palestinian population and replace it with an alien one. This is not a religious conflict. This is apartheid and settler-colonialism cleverly and deliberately disguised as a religious conflict. It is a systematic and premeditated eradication of Palestinian culture and identity. The focus on Jerusalem is but a part of Israel's master plan to take over all of Palestine. Palestinian existence in Jerusalem and in the rest of historic Palestine is a nuisance and hindrance to the colonisers. In the Holy City of Jerusalem, the silent transfer of Jerusalemite Palestinians will become a thunderous crash if Israel's latest strategic actions go ahead.