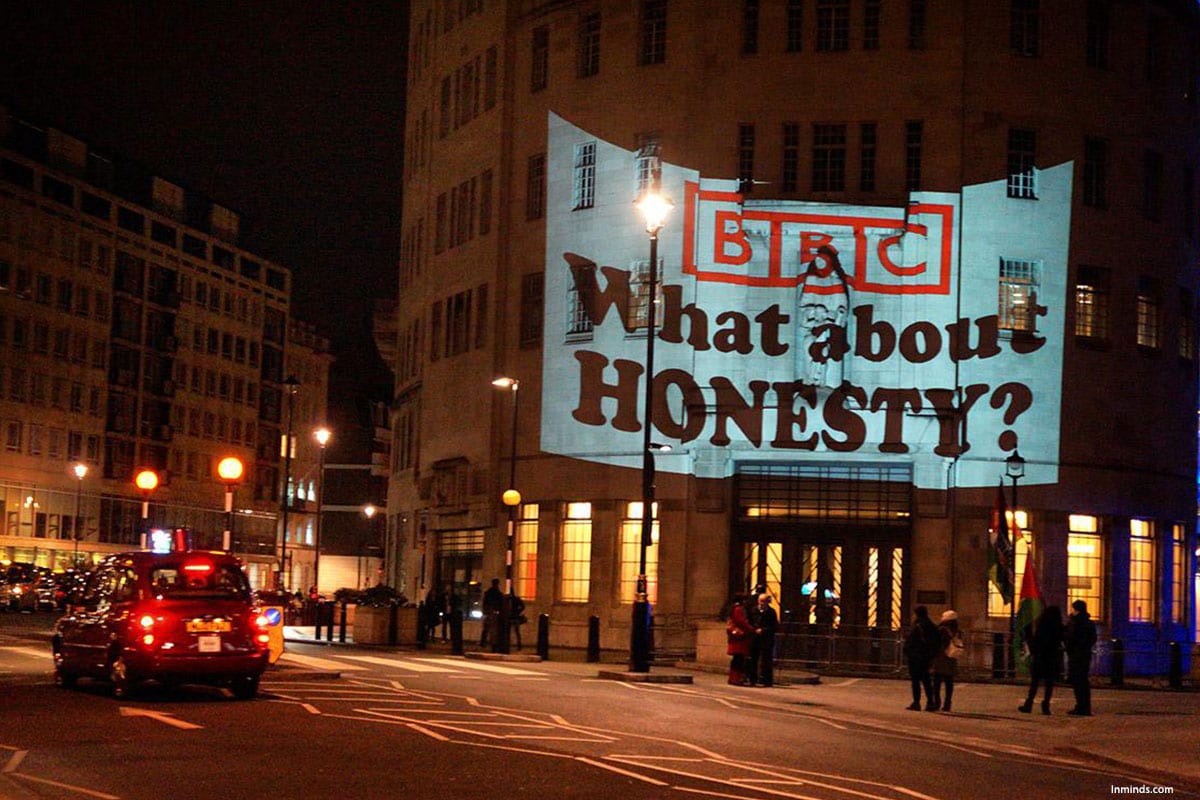 A digital message calling for the BBC to be more honest in their reporting [Inminds.com]

The BBC has conceded that it should have properly identified the Israel advocacy roles of interviewees featured in a report on the Boycott, Divestment and Sanctions (BDS) campaign, and acknowledged that the failure to do so constituted a breach of editorial standards.

The finding of the Editorial Complaints Unit (ECU) concerned an episode of the BBC Two "Victoria Derbyshire" show broadcast on 27 April, which featured a report by BBC journalist Jon Ironmonger on the support offered by some student unions for BDS.

The show's headline claim was that the unions were being "investigated" by the Charity Commission; as I wrote at the time, this was a confusing use of wording which forced the Commission to deny that there were any statutory inquiries open into any student union charity.

The report also gave a platform to three individuals who claimed that the BDS campaign negatively impacts on, and serves to intimidate, Jewish students. The report, however, failed to identify the role of all three individuals in different aspects of Israel advocacy and anti-BDS activism.

Devora Khafi, a student at Queen Mary University in London, was interviewed at length and her claims were central to the piece – but her role as national "Campus Director" for the UK branch of a well-known Israel advocacy organisation, StandWithUs, was entirely omitted.

StandWithUs is an organisation which devotes a significant part of its resources to fighting BDS and the Palestine solidarity movement in general, and has even received funding from the Israeli government in support of its efforts to defend violations of international law.

Another interviewee, Isaac Bentata, was at the time a "committee member" of the UCL Friends of Israel Society, but his role was not similarly acknowledged. David Hirsh, meanwhile, was simply described as a "Lecturer at Goldsmiths", but his long-standing anti-BDS activism went unmentioned.

My complaint was wholly rejected at two separate stages, before eventually being considered by the ECU "against the Editorial Guidelines on Accuracy, as well as those on Impartiality".

In a letter dated 10 November on the results of their investigation, the ECU acknowledged that "the programme-makers should have made clear that some of those interviewed were members of organisations which campaign on the issue of BDS".

Referring to Khafi and Bentata's aforementioned advocacy roles with StandWithUs UK and UCL Friends of Israel Society respectively, the ECU affirmed that "the [editorial] guidelines require that where contributors are associated with a particular viewpoint, this is made clear".

The ECU continued: "While it was apparent from their contribution that the two students had found the actions of BDS protesters threatening, the focus was on their personal experiences and viewers were not told they were advocates for Israel who had campaigned against BDS" (my emphasis).

The ECU decision also addressed the appearance of David Hirsh, who "spoke about the effect he thought the BDS movement had on Jewish students". But, the letter continued, "viewers were not told he is the founder of Engage, which campaigns against academic boycotts of Israel."

Engage was founded in 2005 as a vehicle for combating the academic boycott of Israel. Hirsh has remained dedicated to undermining efforts to hold Israel to account for its violations of human rights, including by participating in an Israeli government-organised, anti-BDS working group.

Meanwhile, the ECU rejected a separate part of my complaint, concerning the treatment of pro-BDS individuals in the video report and in studio.

According to the ECU, "the fact they [BDS supporters] were challenged while others [BDS opponents] were not does not amount to evidence of bias", adding that "due impartiality would not, in our view, require that students who disagreed were also challenged". I'm sure many will be unconvinced.

The ECU letter concluded by apologising "for the breach of editorial standards which you identified".

This is not the first time that such a complaint has been upheld; in 2012, the ECU ruled that the BBC failed to identify Jonathan Sacerdoti, who went on to play a key role with the Campaign Against Antisemitism, as "an active proponent of the Israeli viewpoint".

This latest ECU decision critically undermines the original report, albeit more than six months later, dependent as it was on a narrative provided by Khafi, in particular, as well as Bentata and Hirsh. All being well, the investigation will ensure that BBC journalists do not repeat such errors in the future.