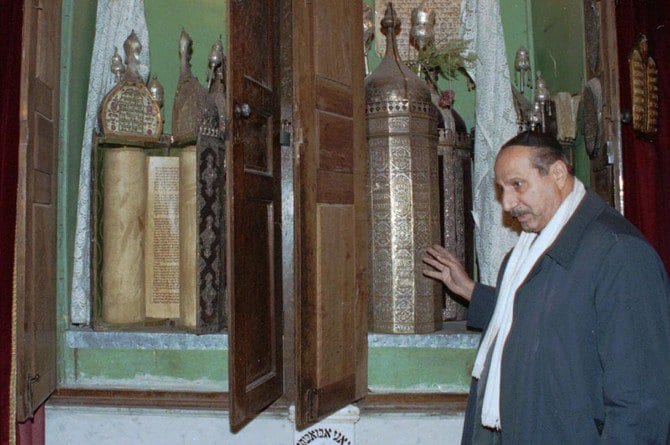 Youssef Jajati, a Jewish community leader in Syria, points out the Torah holy book preserved in a silver container in Joubar’s Synagogue which dates back to 718 BC
June 17, 2018 at 10:03 am

Jewish artefacts, including ancient parchment torahs from one of the world's oldest synagogues, have gone missing from the Syrian capital amid the tumult of ongoing civil war, with some precious items reportedly surfacing abroad.

Activists say the artefacts, moved from the now-destroyed Jobar Synagogue in Damascus' eastern Ghouta suburb when it was taken by rebels, were allegedly put into safe keeping to avoid theft and damage in 2013, but twice since then local officials have discovered some are missing.

The main missing cache, they say, contained torahs written on gazelle leather as well as tapestries and chandeliers, and was given to a militia by a local council for safekeeping when rebels surrendered the neighbourhood to government forces earlier this year. The armed group says it doesn't have the items.