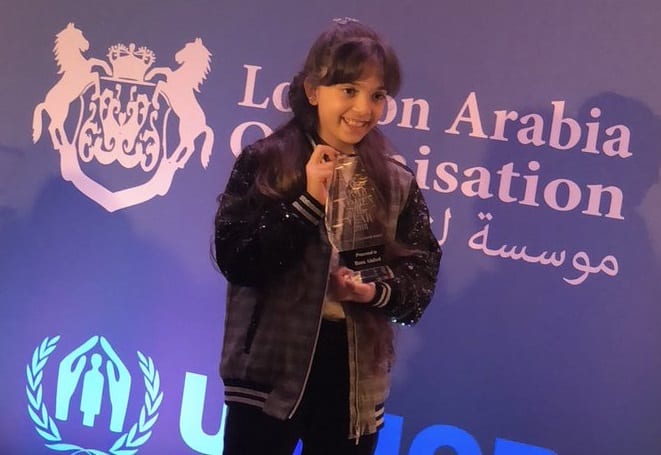 The citizen journalist, who made her name by tweeting about the humanitarian situation in besieged Aleppo in 2016, now lives in Turkey where she moved after the northern Syrian city was evacuated.

Held at the Jumeirah Carlton Tower Hotel in Knightsbridge the event recognised outstanding Arab women who have made their mark on the international stage and contributed immeasurably to public life.

On its official instagram account, awards organiser London Arabia explained the decision to honour Alabed saying: "Her tweets gave a rare and tragic insight into the mental and physical difficulties suffered by civilians caught in the war zone. After suffering through airstrikes, hunger and constant terror."

Bana Alabed won The Arab Women of the Year Award 2018 (the youth achievements award), 8 year old Syrian girl Bana's story has captured the world and her youthful charm dazzled. Born 7 June 2009, Bana Al-Abed came to the world's attention as the voice of those trapped in rebel-held Aleppo during the siege of the city. Her tweets gave a rare and tragic insight into the mental and physical difficulties suffered by civilians caught in the war zone. After suffering through airstrikes, hunger and constant terror. #المراة #المراة_العربية #arabwomen #arabwomenoftheyear #arabwomenoftheyearawards2018 #arabwomanawards #arabwomen #awards #arabyouth #refugees

"These awards were created in 2014 as a platform for us to show our deepest appreciations for Arab women who have done so much as leaders, role models and inspirations," said CEO of London Arabia, Omar Bdour.

"The Arab Women of the Year awards have been a shining example of how our communities can come together, despite our differences, and recognise the laudable feats of Arab women."