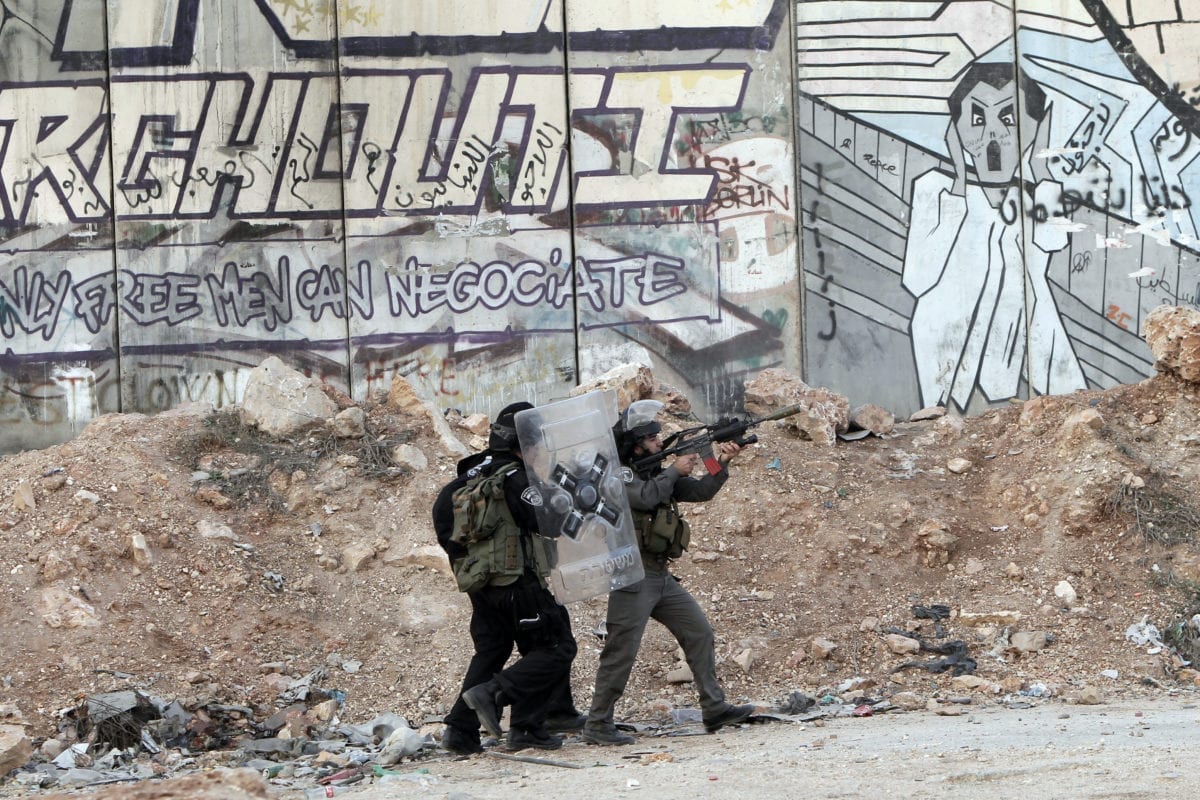 Israeli soldiers fire tear gas towards strone throwers demonstrating against the Israeli military offensive on the Gaza Strip at the Qalandia checkpoint, in the Israeli occupied West Bank, on November 18, 2012 [AHMAD GHARABLI/AFP/Getty Images]
March 9, 2019 at 1:13 pm

In an article published this week in Haaretz entitled "Front Against Apartheid," lecturer at the Department of Geography at the University of Beer Sheva, Professor Oren Yiftachel, argued that the obscuring of the Palestinian issue in the election arena is an attempt to escape the main issue facing Israel – the "apartheid" between Jews and Palestinians.

Yiftachel pointed out that, by neglecting and silencing the issue, the problem is exacerbated rather than solved. The response of the democratic parties must therefore be the formation of a broad front against the intention of "the apartheid bloc" – namely the right-wing parties – to form a colonial regime extending across all historic Palestine.

Explaining the attempts to ignore the Palestinian issue, Yiftachel said that the upcoming elections – which are slated for 9 April – have already brought down a number of victims in the political arena. Chief among those are politicians who support the peace process, such as Tzipi Livni who in February announced she would retire from politics.

Yiftachel added that even Palestinian citizens of Israel show a growing tendency to support "pragmatic" candidates, who do not confuse their unhappy situation in the state with the Palestinian issue.

He attributes this to what he calls the "campaign of distortion that has been practiced in the past four years against the opponents of occupation and colonialism against the Palestinians," which has made many look for other slogans such as social equality, protecting the environment and the rights of women, preferring to silence their opposition to the oppression of Palestinians.

Describing the emerging political reality in which the elections are taking place, the Israeli professor said that there is something he called "geographical distinction," which is not found in any other electoral system in the world. On the one hand, millions of Palestinians under Israeli control are not considered at all and are given no voice in choosing the government that decides the fate of their lives. On the other hand, hundreds of thousands of settlers living illegally in the occupied Palestinian territories (oPt) are automatically enrolled in the Israeli election register.

At the same time, Israel continues to colonise the oPt and continues to control the Palestinians with an iron grip, despite its pretence of providing Palestinian self-rule in small enclaves. This has recently been shown, he said, in the withholding of funds Israel owes to the Palestinian Authority (PA) in Ramallah, continued army incursions into Area A of the occupied West Bank, and Israel's strict supervision of the distribution of Qatari funds to the besieged Gaza Strip.

This geographical "blindness", according to Yiftachel, is manifested in Israeli politics, which "sees" the Jews but does not see the Palestinians in a process which could be called "growing apartheid". This racial segregation formed in the wake of seventy years of Judaization of the state and fifty years of settlement in the occupied territories, producing several layers of citizenship under Israeli rule.

Under this system, Jews are full citizens throughout Israel and also the oPt, while Palestinians are divided into lower categories, for example effectively second-class citizens in Israel, residents of East Jerusalem, and residents of the West Bank and Gaza. Compared to the apartheid system which existed in South Africa until its abolition in 1994, Jews are the "whites", Palestinian citizens of Israel are the "coloured", while Palestinians in the occupied territories are the "blacks".

Read: Yair Lapid spells out 'terms' for 'separation' from the Palestinians

Yiftachel believes the fact that hundreds of illegal settlements were annexed by Israel has turned the occupation into apartheid. It is a situation reinforced by the law, which consolidates Israel's legitimate control of historic Palestine, as well as creates an economic policy which directs most of the country's resources to its Jewish citizens.

By revisiting military and religious historical discourse, Yiftachel argues it is possible to see that Israel's right-wing parties – which declare their support for the annexation of settlements and the continuation of the oppression of the Palestinians – are actually joining this mechanism. Thus, the he believes that we must start by naming the right-wing parties in the upcoming election "the apartheid bloc," pointing out that its likely victory will mean the continuation of this process in the coming years. The unequal treatment of citizens will continue and will become more entrenched, and the system of apartheid will be further reinforced.

Yiftachel suggests that discussions of "occupation there and democracy here" and "right versus left" have failed because they are no longer relevant to reality. Accordingly, there is a need to replace the notions that motivate the regime. Although the notion of "apartheid" is considered among the mass public as an insult, it is in fact a description of a brutal political reality considered a serious crime in international law.

Hence, Yiftachel called on left and moderate parties to raise the anti-apartheid banner, which would break the balance between the blocs, recruit international support and create an alliance between supporters of democracy and peace on both sides of the national wall, as he put it.